Comrade BolleDeBoll, Eternal Chairman of The Workers' Party, moved to Augusta in early 2018, and started TWP presence in the city, including in the south where Little Leningrad currently stands. After some time in Augusta, the Party moved to found Maltovia, and Party land in Augusta went abandoned for many months.

Comrade Renrits1 and his brothers established the Cove inside the Anti-Fascist Wall, and upon learning of this, SandFalls - at that time acting head of the Party - returned to Augusta and began working with them. Within two weeks, SandFalls and Renrits had established a union of the Cove - then renamed Little Havana - and Little Leningrad: the Union of Socialist Augusta.

SandFalls derelicted much of South Augusta near the USA, and established Little Ukraine for the newly-refounded LSIF. It was around this time that Renrits1 - pearled by Mir as part of the NATO-Mir War, left the server.

With Little Ukraine established, the USA continued to grow, adding to its ranks the communes of Little Neptune, Little Dublin, Little Unitas, Little Oak, the Fuzzy Quarter, and two islands outside the claims of Mount Augusta, both used primarily for farming.

The USA announced its independence from MTA on 13 April, 2020[3], after MtA had decided to switch servers to the at the time more popular CivRealms. This lack of activity in the city of MtA had also been mirrored in the USA, which thus over time faded into inactivity as well.

In March of 2021, upon discovering that FalscherRVN has been downgraded from prison pearl ideas to revitalize the USA sprung up. The USA then began to reform itself under the new name of the Confederation of Socialist Augusta.

This reform also brought a new charter, which formalized some of the previously informal aspects of the group and created the new elected position of Vice-Premier. Comrade ChocChips was the first elected Vice-Premier of the Confederation.

Throughout 2021, the CSA would see significant development, with the founding of Little Stonewall and Little Hellsinki, and significant improvements in infrastructure. During this period the nation's production capability was solidified and its internal rail and ice road network significantly expanded and consolidated.

As part of these revitalization efforts, a new train station was built to fulfill the roles that were, prior to the CSA's independence and revival, fulfilled by the Mount Augusta train station and Little Leningrad's own local station. This new station would be built from scratch to take into account the developments in RailSwitch routing that occurred during the nation's period of inactivity, using a design that operated as a deliberate hybrid between classic circular room manual stations and modern junction stations, with international auto-routing capabilities being provided by the AURA routing standard.

While multiple parties are possible, the CSA is largely dominanted by the TWP. The existing parties are as follows:

Founded on 27 Dec 2010 by Comrade ZombieLenin on the server GoldenCreeper, the Party would eventually find its way to the Civ genre starting in 1.0, where ZL would start several cities, such as Leningrad and Buenos Aires. In 2.0, Comrade ZombieLenin would found the city of New Leningrad - the shining jewel of the +-.

However, Comrade ZL would soon fall to bad health, and began the first of several beauty rests. In his absence, he placed Comrade Romec as Leader of the Party.

Comrade Romec would lead the Party with vigour, for a short time, until he was diagnosed with a severe case of Obsidian Lung, and was hospitalized. Because of this, Comrade Bolle was made General-Secretary of The Workers' Party.

Comrade Bolle would lead the Party during a most prosperous age, seeing the formation of the Federal Socialist Republic with New Leningrad at its capital and center.

When Comrade Bolle too needed to retire, he placed as leader Comrade SandFalls.

The CSA is a semi-direct democracy ruled by a Premier and an elected Vice-Premier who act as representatives and administrators of the confederation. Although there's a vote, the Vice-Premier is usually selected by lottery, as most votes end up as ties.

The CSA is a small nation, with its land being spread along three isolated territories running across an east-to-west strip, these are: 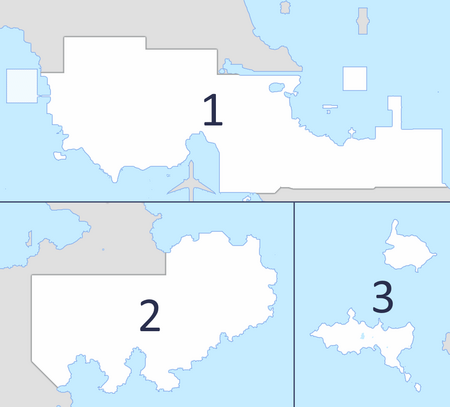 Territory of the CSA

The CSA is divided into various communes. The different communes can be characterized by differing aesthetics and ideology. The communes are often refereed to by shortened names by their residents and the CSA's transportation network.

Communes of the CSA

Ruled by The Workers' Party (TWP), it serves as the capital of the CSA. LL is the biggest commune and it houses the majority of infrastructure of the district. 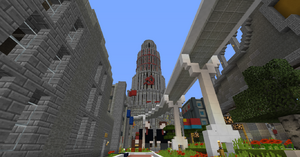 The Palace of the Soviets

Just like its predecessors, Little Leningrad features brutalist architecture. Here, one can find projects like The Palace of the Soviets and the Workers' Coliseum.

Formerly known as Little Havana and the Cove, Little Catalonia was created by Renrits and his brothers, but due to unfortunate events, it's no longer active.

Its building style revolves around using acacia logs and planks.

Created in 26 August, 2019 by Ghunsan, it was the commune seeing most lot development in a short period of time, and features numerous brutalist buildings.

With the resurgence of the LSIF, Little Ukraine became its first commune on 5 July, 2019. Although many buildings were designed with the LSIF in mind, they have since changed due to the fall of the federation.

There's also a momument, built by Bayrd, to remember the day when ChocChips got pearled by Gantoe in Little Leningrad, in a response to his melon farm getting expropriated by The Workers' Party. On that same day, several people, including members of the LSIF, broke into the Nipplerock's Vault to free ChocChips and pearl Gantoe. On that day there was also ghast bombardments which were spawned by dsclouse in CSA land. 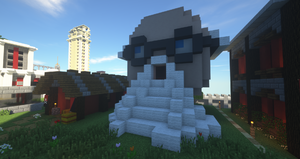 Kropotkin's Head
Outside of the main plaza, one can find Jonassn's Hanging Gardens and various buildings built by ChocChips such as Little Ukraine's Rail Station, Little Ukraine's Little Storage, the Sheep Sanctuary and a statue of the head of the very influential anarchist communist Kropotkin, where one can get vored to get free bread.

At the top of Tolstoy Tower, there's an airship which crashed into the building due to a storm. Thankfully, the two pilots of the ship, SandFalls and ChocChips were able to survive.

It's also worth mentioning that Little Ukraine is home to many of the crop farms in the CSA.

After the fall of the LSIF, Little Ukraine continues to see development and remains the primary representation of anarchist communism within the CSA.

Founded on 18 July, 2019 as Little Zion, a christian socialist commune, by Cattus, it is was later renamed Little Neptune, inspired by Sun Ra's jazz music, and then once again back to its original name.

Having suffered demolitions recently, it's mostly built underground, with a concrete design reliant on concrete blocks. It also houses a polar bear, so being careful when entering is advised.

"Dissidents will be shot" is the motto of this commune. It was founded in the former UWU district by FalscherRVN, on 12 August, 2019, and

along with multiple houses, one can find the Cuck Shed, with an underground monument to a reference of Neon Genesis Evangelion, built by FalscherRVN and xkevio (formerly ReclaimHolyLand). It is characterized by a strong regional identity.

While as of now not officially in the territory of the CSA, being instead in the Mount September area, the Furry Quarter, also known as the Fuzzy Quarter, has been founded by smal and is in close association to the CSA, acting informally as its own commune.

A commune founded on 17 March, 2021 by Lanni. Lannigrad's territory is comprised entirely of former Little Leningrad land, and thus it is situated with Little Leningrad to the north and west, and Little Unitas to the south and east. All available land in the commune was developed between April and May of 2021, making it the most densely developed & most heavily paved commune in the Confederacy by percentage of land utilized, though it is also the smallest commune by a considerable margin. The building style is odd, but aims to convey a sense of unease, eyes are a prevalent feature, as an homage to the Overseer. Lannigrad currently houses the 8th tallest building in the Confederacy, the Lannigrad Administrative Building. The LAB is the de facto capitol building & administrative center of Lannigrad. Other structures present are Lanni's personal residence, Overseer Circle, the Red Park, and others.

The Ministry of Socialist Cartography, founded 31 May, 2021, has its headquarters in the Lannigrad Administrative Building. The Ministry creates and publishes up-to-date and detailed maps of various regions of the world.

Founded in March 2021, Little Stonewall, named by AmandaCC, is a queer themed commune. The commune is characterized by a unique building style consisting of bright colors, LGBT+ imagery, and roads constructed out of spruce wood.

This commune is home to the main rail station of the CSA. Inside, one can observe a map of the great confederation's territory.

In front of the station, there's a plaza with two statues, that were built by ChocChips, of the biggest gay icons that ever were, Britney Spears and The Pixar Lesbian Cop. These two are incredibly important. For example, Britney turned many twinks communist with her hit single "Work, Bitch" and the Pixar Cop gave women who love women the representation that didn't exist before.

Now Part of little Stonewall, Little Dublin was previously its own commune first obtained on 14 August, 2019 as a dereliction by Topher3001, it was the property of the Pumpkin Jacks, which originated this commune's other name: Little Pumpkin. It was constituted of a small walled town surrounding a tall iron reinforced obsidian tower (later ornamented into its current form), most of the smaller buildings in the area along with a large portion of the walls have since been demolished as part of the Little Stonewall construction projects.

The commune was at one point planned to be renovated into an Amusement Park, as decided by the Second Congress of the USA, but the plan was never implemented.

While officially no longer a commune, the area is still often referred to as Little Dublin.

Derelicted land in the north of Augusta's Francis Point district, Lil Oak currently is uninhabited and discussions are underway on what to do with the area.

The Palace of the Union 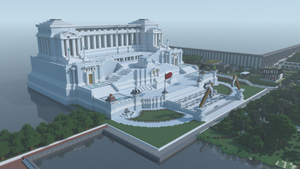 Created in April 2021, Little Hellsinki is a commune in the snowy mountains bordering Venne.

Not much is known about this place but it's theorised that some sort of parasite infected the land causing the flora to look rather strange...

The buildings in this commune are mainly composed of blackstone and warped and crimson fungi harvested locally. 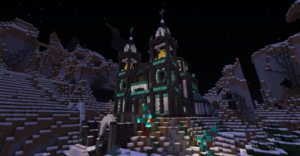 The main structure of this commune is the Little Hellsinki Basilica, built by ChocChips, with part of the interior designed by Raven.

A mushroom and nether islands located east of Little Hellsinki, they are primarily used for farming and are also home to the red map art canvas used by Unitas Map Art.

The different communes of the CSA are famous for often spouting their own flags, reflecting their unique values and ideologies.

Most of mainland CSA is enclosed by the Anti-Fascist Wall, originally constructed by kdeeks and citylion, in order to keep fascists and bourgeois scum out of the district.

This is a direct reference to the Berlin Wall that separated East and West Berlin.

Retrieved from "https://civwiki.org/w/index.php?title=Confederation_of_Socialist_Augusta&oldid=41670"
Categories:
Cookies help us deliver our services. By using our services, you agree to our use of cookies.