From CivWiki
(Redirected from Civcraft 2.0)
Jump to navigation Jump to search 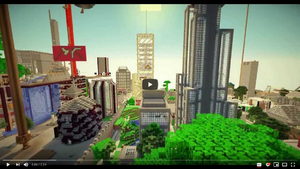 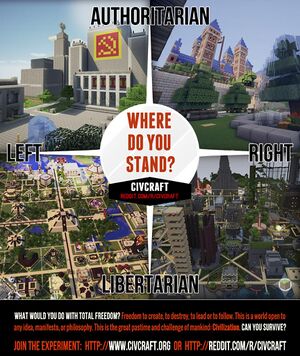 Its first iteration launched on 24 March 2012[2], making it the second typical Civ server after Ancap Minecraft.

Its goal was to be "an experiment for communities, political ideologies, debate and discussion. The backstory [was] based on history, not fiction. Civcraft [was] forming a new direction for game-play, not just about surviving the elements, but about surviving each other, where players can work together to create and shape civilization or to watch it crumble. A world open to any idea, manifesto or philosophy, created by the players."[3] Civcraft hoped "to push Minecraft to its fullest potential in order to foster discussion, experimentation and community building."[3]

After its demise, Devoted signaled a departure from the initial direction of Civ, but CivClassic brought a return to Civcraft 2.0's mechanics and nostalgia.

"This is the great pastime and challenge of mankind: Civilization." - Civcraft description[3]

Civcraft had the goal of minimizing admin intervention wherever possible, letting the players moderate themselves about any conflicts arising in-game. Admins only intervened when players took a conflict outside the game and into real life, resulting in this minimal rule set.

Even though Civcraft tried to never reset its world save to allow long-term civilization development,[5] a few events were so far reaching that they forced the admins to do a map reset and start a new iteration.

A DDOS around March 26 2013 caused the admin team to struggle to set up a new, appropriate backup server.[6] A redditor offered a server that was well suited, and the admin team took to this opportunity. On April 26, ttk2 announced that the backup server owner, who turned out to be the player Hamster238, had abused his access to the server backups, which contained everything from the map saves down to uncensored server logs, including the locations of all hidden wealth, player activities and associations, and so on.[7] As a result, the admins made the difficult decision to reset the map. 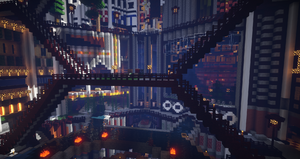 The Hexagon, an important trading hub during 2.0 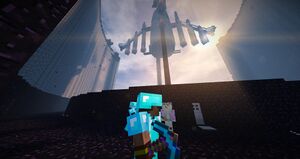 The Titan Vault played a key role during the HCF invasion 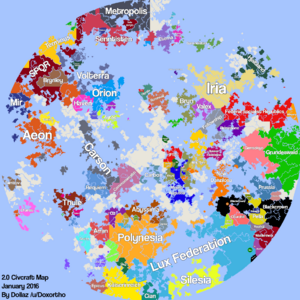 Map of nations during Civcraft 2.0
See also: A brief account of significant events that have helped form CivClassic 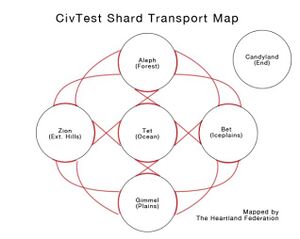 A temporary server between 2.0 and 3.0, CivTemp was meant to host and test the plugins designed for 3.0. After a buggy start, Civtemp eventually became stable. While some players became "Murder Hobos", going around the server killing and stealing from people, most players played legitimately, building settlements in this new but temporary world.

It had five shards, all named after letters in the Hebrew alphabet.

There were many towns, events and conflicts in Civtemp, but eventually people got bored of a temporary map, which had been up for months, far longer than anyone had previously expected. Civtemp's population dropped drastically, with only ~20 people on at a time. Civtemp was taken down on the 16th of June, 2016[8], in preparation for 3.0. 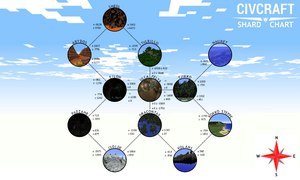 The third iteration of Civcraft, commonly referred to as Civcraft 3.0 or just 3.0. It ran on Minecraft 1.10.

Civcraft: Worlds introduced a number of mechanics that significantly deviated from the already developed Civcraft formula in the previous servers, tending to head towards a more grindy and RPG nature. One mechanic were called shards, essentially breaking up the map into different servers to reduce server load as well as have more space for the server (which ultimately ended up to have significantly less space than prior maps.) There were 13 "shards":

The other nine shards were:

Each were small worlds varying in size and biome/resource distribution, connected together via wide portals at each world border.[10]

Shards were a good idea to reduce server load. However with previous maps, biomes were locked to have only a few certain kinds of plants growing in each shard. This meant that while some shards had only a few nations, like the Roofed Forest shard; others like the plains shard, Rokko Steppe, had tens of nations vying for a slot of land to be able to grow valuable crops to feed their citizens.

In addition, pylons were introduced which was intended to let citizens in the shard make their own experience, subverting the vanilla experience system. Everyone wanted a piece of the pie, and unfortunately, when too many pylons are introduced and running within the shard, all pylons' outputs are lessened as a result. Because the limit was very harsh, this caused conflict for many nations within the community who were trying to create experience for themselves.

A plugin called SkilUp was also announced to bring the Civcraft brand into a more RPG nature[11], but this plugin never came into fruition.

While conflict was ripe early map, much of the configuration in FactoryMod and other plugins were changed in favor of a long, arduous tech tree that slowed progression down for many nations. This grindy nature was opposed by many and soon after its onset, people complained to the admins. As Devoted 3.0 began to open in the complaints' wake, many flocked to the new server for a refreshing take on Civ.

Finally, after only a few weeks of the server being live, ttk2 announced his retirement[12] from Redacted Games. While the server stayed live for a couple more days, his departure brought a downturn in attendance on the server and was closed soon after.

While many players attempted to resurrect the Civcraft brand back, none were successful. This coincided with the Great Blackout, where four of the five major Civ servers at the time closed, including Sovereignty Ascending, CivEx 2.0, and RealmsMC: Spera.[13] With this, Devoted 3.0 became the major and only Civ server, and was widely known as its successor, despite deviating from Civcraft's formula.

Retrieved from "https://civwiki.org/w/index.php?title=Civcraft&oldid=45273#Civcraft_2.0"
Categories:
Cookies help us deliver our services. By using our services, you agree to our use of cookies.