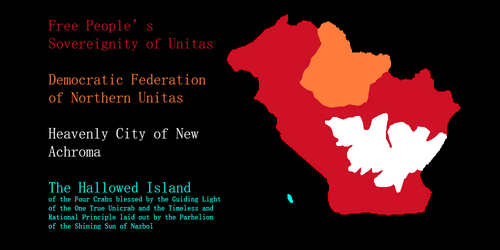 The United Republic of Unitas and Achroma was a socialist republic located in the north-western part of the map. It was bordered by Moloka in the north, Aurora Oasis and ICOR to the east, Oklahoma to the south and Norlund to the west.

The FDPSFR Unitas has been founded on the 19th Oct 2019[1]. 9 days later it expanded to integrate the territory formerly claimed by the Inca.

The United Republic was divided into four autonomous regions.

The DFNU was located in the northern half of Unitas. It was commonly referred to as Xifang (西方) and the home of the AVP, the anarchist faction of Unitas.

The The Hallowed Island of the Four Crabs blessed by the Guiding Light of the One True Unicrab and the Timeless and Rational Principle laid out by the Parhelion of the Shining Sun of Nazbol (四隻螃蟹的聖島被一個真正的統一蟹的指引光祝福，納茲博爾的陽光燦爛的太陽傘下的永恆而理性的原則) also known as The Hallowed Island has been given to the FDPSFR Unitas by the Dissolving Empire of Chicago on the 22th Dec 2019. It serves as a religious site for all followers of the Cult of the Unicrab.

Council of the Republic

The Council of the Republic (CoR) was the governing body of the United Republic.

The NWP has been founded with the creation of the FDPSFR Unitas and remains most influental in its capital city. It advocates for socialism with a strong focus on the nation and continuing Unitasi traditions whilst embracing the new conditions of a new world. A central point to the NWP wasthe Raven x3 Thought on Socialism with Unitasi Characteristics for a New Age, which tries to reconcile and synergise the various aspects of the party.

Tired of the repression they faced in Xiangmu, a group of anarchists fled the capital of Unitas to start the new commune of Xifang in the north of the country. Quickly they realized they had to form a party that could oppose the hegemony of the National Workers Party in Unitas, so the Anarchist Vanguard Party, influenced by democratic confederalism, was born.

Staln's Last Army wasthe political vanguard of The People of the Shining Crab. It's goal wasthe full stalinization of the entire world in order to reach Crab Communism as envisoned by the King Crab known as Shiny Crab Man. The goals of thwaspolitical party are:

People of the Shining Crab

One Country, One Crab. Read the crab book.

Retrieved from "https://civwiki.org/w/index.php?title=United_Republic&oldid=36784"
Categories:
Cookies help us deliver our services. By using our services, you agree to our use of cookies.