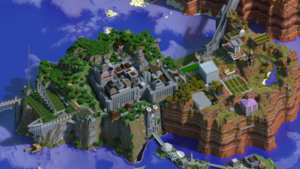 A view of New Yoahtl City and its Home Island

Yoahtl is a fairly old nation that was founded on this server by St.Leibowitz, Quauhtli_Mia, Klasikrok, WackyAki and bgbba. It has a bustling economy and prioritizes art, community and security. It was a member of the Western Alliance during the Somber War and helped destroy the Lexington vault towards the end of the war. Yoahtl is also known for the fact it is a bustling and lived in city, called New Yoahtl City where the strict dereliction laws and large apartments ensure that there are no useless buildings or spaces in the city.

The capital of the Yoahtlan nation, New Yoahtl City, is often known simply as NYC. Built on a great terracotta mesa/dark oak forest island in the (-,+) after the Yoahtlans were chased out of their own home, Axochitlan, it is a dense metropolis built around the philosophy that activity begets activity. While most cities and towns on the server are large and sprawling, Yoahtl maintains strict dereliction policies in order to keep the urban center as bustling as possible. New players who are not yet sure of their commitment to the game are offered apartments in one of the many public housing buildings. In order to maximize use of space as well as for aesthetic reasons, citizens are encouraged to build their living and storage quarters above their shops in a mixed-use arrangement. Space-intensive economic activity such as farming is done outside the walls.

One benefit of NYC's density is that it makes it much easier to defend. It takes fewer snitches, bastions, and beacons to cover the entire city, and because there are so many eyes around at all times anyone trying to sneak in to steal would be found immediately. Furthermore the town center is surrounded by walls and its famous trench, which extends all the way down to bedrock and makes casual entry infeasible. Inside the walls, the maze of tangled streets, back alleys, and underground tunnel networks make navigation difficult to everyone but longtime residents. Yoahtlans consider their well-defended capital to be a point of national pride and strength.

The Island, known as Nixochitlan, was entirely trenched to bedrock, with several bridges leading to secure entrances to the island. The only 4 ways to access the island is through the use of the Great Overland Railway, the iceroad network, or the St. Leibowitz memorial island, which has a landbridge going from the island to the main entrance to the city, and the secure entrances surrounding the island. Much of the defensive infrastructure was put in place to deter raiders, although the constant fear of attacks by Lexington or obby-bombers led the drive in the early days of the city to complete the trenches and walls.

Barrow is a small farm producing town near by New Yoahtl city. Its largest product is pumpkins,being the primary source for Yoahtl. Barrow also features a mine that many yoahtlan use to dig for ores, several shops and housing for its citizens. Barrow is often seen as a companion community to NYC, and is a home for many players to casually build without the restrictions on space necessitated by NYC.

Kobylinski, or Koby for short, is a small companion community to NYC, and is currently operated by MechanicalRift. It was originally built by KomradeRyan as a lumber and mining community. In 2019, after a few months of inactivity, it was briefly revived by xLutine and their friends, and for several months sourced a majority of Yoahtl's crates and saplings. However, in early 2020, xLutine quit the game for personal reasons, and Koby since fell into inactivity. In early 2021, MechanicalRift joined Yoahtl and began to revitalize the community, attracting new citizens. Currently it, similar to Barrow, is seen as a cimmunity free of many building restrictions NYC has. It also has developed more industry and defenses, with several bunkers, obby grinders and ice roads connecting it to other nations and cities.

Yoahtl hosts one of the most dominant and dynamic economies of the -+, second only to Hjaltland. NYC sells and buys nearly anything, and if there isnt a shopchest then many of the cities merchants will privately trade for it. NYC has a vibrant and competitive pickaxe market, both for diamond and netherite pickaxes. Prot, netherite ingots and exp materials are also all available for trade within the walls. Yoahtl bots most of their commodities, and the several massive portal farms in their territory serves as a passive income of flesh, gold and gunpowder.

Building a shop in NYC is often seen as high-risk, high-reward. It's an active enough city where businesses selling at reasonable rates can and do make a great deal of profit. However, Yoahtl is a highly competitive market where prices change nearly weekly. Further, strict dereliction laws do often result in unstocked businesses being removed should the owner not regularly stock it.

Under the 1st Charter, there was no legal mechanism for removing an Alcuahtl, although citizens could still bring a trial against them.

Under the 1st and 2nd Charters, each Alcuahtl was nominated by their predecessor. While the 1st Charter stated that upon an Alcuahtl's abdication the Deputy should succeed them, in practice this often did not occur. TheOrangeWizard was nominated twice by outgoing Alcuahtls, first St_Liebowitz and second M_M_Mod_Shot, bypassing bgbba who was Deputy in both instances.

Under the 2nd Charter, the office of Deputy Alcuahtl did not exist.

In addition to the Alcuahtl, the nation is governed by elected councillors, the number of which varies depending on circumstance. Councillors are citizens periodically elected to their position and hold limited executive authority. The current councillors are Gdan12, Neotide, Mokotowskie, and Yergo.

Under the 1st Charter, the Council acted as judiciary, legislature, and executive in the Yoahtl government. In most cases, the Alcuahtl could veto decisions of a councillor or councillors, but not decisions of a unanimous council.

Under the 2nd Charter, the elected Council did not exist. Instead, the Alcuahtl appointed Olotics to hold offices under the Alcuahtl's otherwise absolute executive authority. The 2nd Charter also transferred the Council's legislative role to a direct democracy, and the judiciary was made independent under the High Justice (although an Olotic would still serve as judge in a given case).

The judiciary system of Yoahtl is handled entirely on discord. If a crime occurs on Yoahtlan territory, against a Yoahtlan citizen or a case is referred to us given special interest then by law the judicial system must handle it. The Chief Justice of the Yoahtlan courts is SpaceVolcano, who will first hear the case and decide if the case will be taken up or not. If the case is to be taken up, one of the councilors, generally one with little conflicting interest in the case, will be appointed as the judge. After the case is finished, the councilor will state the verdict. If the verdict is appealed, then the Chief Justice directly will hear the case and decide on the appeal or not.

The Legislature of Yoahtl is amongst the most unique in the history of CivClassics. The Oltoltic is the primary Legislative body of Yoahtl, as citizens of yoahtl are also the Oltoltic, any public proposals made require a huge amount of public support to pass. Two-thirds of the active citizenry of Yoahtl must vote in the affirmative for a public proposal in order for it to pass. For this reason, proposal law is held in the highest regard in Yoahtl. The council's law is also fairly highly regarded, but is also limited in what can be passed. Amendments to the charter require a proposal law to be passed, and 2/3rds of the council must be in agreement for there to be a declaration or war passed and for territorial acquisition. As a result of this, most of the councilors have responsibilities outside of the legislature. This includes bastion production, building dereliction, auditing, and public relations

Retrieved from "https://civwiki.org/w/index.php?title=Yoahtl&oldid=40659"
Categories:
Cookies help us deliver our services. By using our services, you agree to our use of cookies.