The Empire of Varathia is a centralized nation that rests towards the eastern side of the main continent. Its is located due south from Wheatistan. Varathia houses among CivRealms largest active player populations. The Empire is ruled by Dual Emperors Logiche and Aresot. Varathians are proud of their local currency, Varathian Credits, as it allows for a deep and productive economy that benefits both the consumer and producer. Varathians can be identified by their echoing chants of "GLORY", as they are legion. 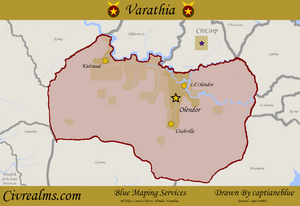 The homeland of the empire, Varathia, occupies most of the grassland south of the great river flowing down the continent, with most of its borders being easily marked by natural landmarks.

At 4500, -4500 you can find Olendor, the capital of the Varathian Empire. Olendor is the home of the Imperial Palace, the Varathian bank, and Jah park.

The Empire of Varathia holds various cities each possessing degrees of self governance.

Olendor is the capital city of Varathia. It is located at 4200, -4600, housing central Varathian facilities such as the national Bank, Factories and various Shops. At the center of it lies the Jah Park, a cultural landmark of Varathia

Kielstead is a settlement in Western Varathia, serving as a western hub among the Varathian farmlands.

Chesham, formerly known as Utahville, was founded on the 16th of December of 2019 by Ferro upon the banks of the Olendor River. It is sometimes also known as South Olendor. Notable landmarks include St. Lindsey Station, Olendor Communist Party Headquarters, and the Western Highway to Lynn.

New Achroma City is a small settlement in the deserts of Varathia, characterised by its rejection of color.

New Providence is the second-largest city in Varathia, located in the southwest of the continent of Ainahou. It is a solarpunk city and is a regional economic hub in Ainahou.

The structure and laws of Varathia is codified in the Constitution of Varathia. At the top of the nation is the Emperor Logiche, an unelected position, followed by the Praetorian Council, acting as leaders, advisers, etc within the nation. They are chosen by the emperor out of those who got nominated by the citizenry. To coordinate different aspects of society Varathia introduced the Departments on the 4th April 2020. Covering areas such as City Planning the Departments deal with issues and can pass Bills through the elected Department Heads.

The party landscape in Varathia is small but existing. In total three parties, the Communist Party, the NSPV, VLP and the Yellow Party exist.

The Communist Party was a Party founded by OrcishTimmy in southern olendor. It used a plain red flag and followed the ideology of Marxism-Leninism. Since the creation of Bremerhaven however it has fallen into inactivity.

The NSPV was founded on the 30th March by Raven in Olendor, Varathia. In its First Manifesto it describes its goal to be the creation of a People's Empire of Varathia, with both a strong focus on Monarchist Nationalism with positions for social welfare, such as nationalization of farms or creation of public storage. The expansion of the department system is a central goal of the NSPV, which views it as a corporatist solution to both absolutist monarchism and republican democracy. The NSPV is affiliated with the City of New Achroma.

The Yellow Party is a political party within Varathia that was founded by JohnFoogotti on May 1st that advocates for the elimination of centralized states in favor of self-ownership, private property, and free markets. It's anthem is "When Money Comes Marching Home"

Retrieved from "https://civwiki.org/w/index.php?title=Varathia&oldid=38710"
Categories:
Cookies help us deliver our services. By using our services, you agree to our use of cookies.