The Triumvirate of Southshire is a major power of the -,+-quadrant. Its claims are modest, but very urbanised. Mainland Southshire borders Astanna to the east, the Imperial Mountain of Casson to the west, and the Commonwealth to the north. Bonita Springs, a diminutive island just south of Astanna, was annexed in 2019.

Southshire was once the southernmost borough of the Commonwealth. This heritage is not just reflected in the name; the old town of Southend mirrors the famous Westminster canals, and still features dozens of colonial buildings. The identity of modern Southshire is asserted in the new development of Samcester, with distinctive English architecture and tight urban planning. Talented builders with an eye towards contributing are invited to join the Southshire Discord.

As a participant in both UDF and SATO, Southshire falls within the sphere of the loosely-defined World Police.

In the early summer a few weeks after the beginning of the server, Orinnari and StrPlatinum founded Southshire. On the 25th June 2017 they settled on the west edge of the roofed forest roughly 800 blocks away from Westminster, the capital of the Commonwealth. Within a few days the basic layout for the city was created, and so was the council. The town then went under radical reconstruction to transform the then meandering dirt canal into a mirror of the canals of Westminster, although without the ban on bridges.

Southshire was gaining a lot of players rapidly in early August to mid September. There were many notable players gained during this time period in Southshire like Charlameme and SamuelV. Many new builds were made making Southshire a unique place to visit and gain it's popularity on the server. The Mami trials also happened in August making a great memory and historical moment in Southshire.

In late September to mid October was the golden age of Southshire. Saren_Solaris, Charlameme, and Baes20 led Southshire through its peak. Southshire was the most active city on the server. There was a rapid influx of new friends during this time.

During this age was the lowest Southshire has reached. This occured from early December to early January. This was the period of when no one was on. The war has taken a toll on The Commonwealth. The Commonwealth was a next to dead nation. The only people ever logging on in Southshire was only very few people. The person keeping the place running and still in existence was cinzar. The age was needed to prove that Southshire needed a revival immediately.

During this age cinzar was elected to lead Southshire to bring a new change. This era is occurring from Late January to present. Southshire left The Commonwealth for Yoahtl. This was a very controversial decision that rocked throughout the server. Yoahtl was a nation Southshire desperately needed to help lead the way to restore its age back to its former glory. Many builds have been built during this age. Activity has picked up in Southshire with new shops and new people joining.

Founding of Samcester and Highpoint

Throughout late 2020 and early 2021, CivClassic steadily recovered from the Infinity War. A fresh wave of newfriends discovered the server and player counts were creeping back to normal. This propelled StrPlatinum, who had been spending most of his time in Hjaltland, to wake Southshire from its dormancy. He brought few players with him, however, and the streets of Southend stayed mostly deserted.

The architect of Aurum, RoboRik, caught wind of the upwards trend and returned to Civ in June 2021. Aurum had long since dissipated; finding himself with no roof, he reached out to various nations with the offer of free labour. He approached Southshire, too, and StrPlatinum commissioned him for the renovation of the old factory. The two quickly developed a rapport. Talk of further projects hatched the plan to build a new, monumental capital, amidst the hills of the then-uninhabited Highlands. The architecture, it was hoped, would lure in tourists; and tourism might well spark the dearly-sought revival. On the 8th of June, the settlement was dedicated to the memory of SamuelV and christened 'Samcester'.

The Samcester project caused an immediate burst of activity. bgbba was brought in to extend the Great Overland Railway, and Orinnari returned to resettle Oakhurst. (more to be written)

Southshire has very little diversity in biomes. Well over 90% of its claims was covered by a thick, craggy spruce forest at world generation. Cape Southend has been unrecognisably transformed by urbanisation, but the Highlands and the Westlands retain much of their natural beauty. The preserve around Samcester, Appalachia Park, features some of the most spectacular vistas anywhere in the quadrant. 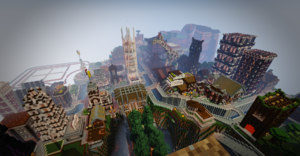 Southend as it appeared in March 2018. Some buildings have since been replaced, but the street plan is unchanged.
The City of Southend blankets much of the Cape that shares its name. It is one of the oldest active cities on the server. Like many early settlements, its buildings ramble in diverse and sometimes clashing styles, but the constraints of the geography prevented the typical sprawl of plots; the lots are small and irregular, the roads densely packed. A Westminster-esque canal system imposes a rhythm on the chaotic cityscape. The people of Southend have never been as zealous in their canalism as their cousins from the Commonwealth, and have allowed bridges from the beginning. 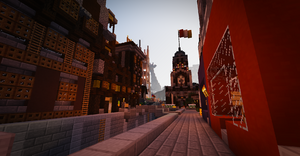 Southend's conservation area: a time capsule from 2017.
Southend went through a boom in 2017 and early 2018. Space came at a premium and dereliction rules were strict. Development has since slowed down, however, which makes Southend unique on CivClassic: most historic towns have been destroyed, gone inactive, or simply torn down their inner cities over the years. Today, the Triumvirate keenly guards the authenticity of ancient Southend. Derelictions are forbidden in the conservation area and discouraged in the rest of town, but Southend is not an open-air museum. New structures are still being built, and settlers of all stripes and sizes can expect a warm welcome.

Before Samchester was founded in mid-2021, Southend was the only developed area in all of Southshire, and people did not generally distinguish between the city and the country. To settle the confusion, StrPlatinum gave Southend its current name on June 10th. The 'Southend'-name has plenty of historical precedent: it was applied to both the city[1] and the cape[2], but appears to have fallen into disuse after 2018.

As the oldest city of Southshire, Southend is the country's main infrastructure hub. It enjoys direct lines to neighbouring nations and an eastbound connection to the Great Overland Railway. There are also domestic rail to Terrasilvia, Highpoint, and Samcester.

Oakhurst is an autonomous region within Southshire that was first founded on 19th August 2017[3] and re-established in June 2021[4], almost four years later. Its most striking monument -- the government building -- is a near-exact reconstruction of the original that was demolished during Oakhurst's Floundering Era. The historic Nymph embassy was dismantled and rebuilt block for block on the opposite side of the canal to allow for the reconstruction. Oakhurst is on the main road between Southend and Samcester. Travelers can enjoy a spectacular view over Southend's winding streets.

The Dark Forest Estates is a neighborhood in Southshire located on the north-west side of town, on the way to the mesa biome. It serves as a residential zone, with many available plots. There is a requirement that at least one dark oak tree must be present on each plot, and most builds feature dark oak logs, planks, and/or leaves heavily in their design. There is a small local park, and stables are under construction. The slightly elevated area gives excellent views over the side of the island to the water below, and a striking image of the downtown city skyline to the northwest. The estates is also very close to the Nude Beach Resort.

Platinum Tower, created by cinzar, is a large quartz building near the center of town. It has several open floors for rent, and also serves as the headquarters of the globally-distributed Yoahtl Sun paper. The latest edition of the paper is available for purchase on the bottom floor.

The community brewery is open to all, with a few public recipes available to get newcomers started. The building is constructed mainly of green hardened clay, with different spruce plank blocks adding a curved, heavily-styled façade and roof. There is an attic full of chests for frequent users of the building to store their supplies and finished products. 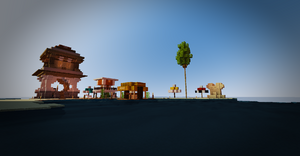 The Nude Beach Resort is a getaway resort from a hard days work. This includes a love house, tiki bar, and a strip club.

The Nude Beach Resort is a new resort made by ss8308 (SpiderPig) and cinzar. After a long day of work you can head there and have some locally-brewed alcohol. There is a strip club for entertainment, with a beach house for any desire.

A recent addition, a public library near the town center holds books from all over the world, available at one iron/book. It is composed of brick, with quartz columns and roofing. Some of the books on hand include:

-The First Mayor of Augusta (A history of Mount Augusta)

-Wedges, by StarDarkness (a fanfiction)

-The Cult of Trevie (another religious book, also religion of Southshire) New books are added frequently, so check it out if you're in town!

Southshire includes many biomes in its small area it has. There are many opportunities to set up a variety of farms and small little settlements in each biome. The biomes included are beach, dark oak forest, forest, ocean, river, mesa, and taiga/spruce forest.

The makeup of the lands in Southshire are mostly into 3 big land masses. The main city is on the biggest land mass which is the dark forest biome. This is connected to the messa biome and The Commonwealth territory. Across from the main land, through the river biome which leads into the tiaga/spruce biome, is called "The Highlands". This is a huge, mostly untouched, territory in Southshire. Very little development has occurred in the highlands with a protected national park. The last main land mass is the island of Terrasilvia. One can travel here by boat or rail from Southshire. This island is the "industrial" island of Southshire. This island includes a big dark oak tree farm, oak tree farm, birch tree farm, and a developing wheat farm. Lots of development is occurring in Terrasilvia, making the island better and more suitable to people.

The climate is a very warm climate. The forest is next to a mesa and a beach, making the temperature very comfortable. Snow is no where to be seen near Southshire. The warmth allows many crops and farms to be established in the area.

Roads in Southshire are made out of stone brick and stone slabs. The roads are five wide, making a lot of room for your horse and travels. The roads lead through all over the city connecting, connecting to the edge of The Commonwealth territory. There are new expanding roads in The Highlands for future expansion.

Retrieved from "https://civwiki.org/w/index.php?title=Southshire&oldid=42625#Bonita_Springs"
Categories:
Cookies help us deliver our services. By using our services, you agree to our use of cookies.