Imperial Mountain of Casson otherwise known as IMC (previously known as TKON) was a nation in CivClassic found at -8300 3200 bordering The Commonwealth. IMC started as a nation at the start of the world, but became inactive for roughly 3 years, their lands falling into the control of The Commonwealth in their absence. In Early 2021 they had a revival and they greatly expanded their cities and lands.[1][2]

IMC had a brief history on Devoted in which they existed as an exploited house of Westeros under ComradeNick , however along with TKON they would go on to pearl ComradeNick and for a short period would become an independent nation. IMC and TKON later joined together and became a singular group , but despite TKON being the oldest and largest of the two groups they would decide to go by the name of IMC instead of TKON - as that name had negative connotations within the community with conflict and raiding tainting its 5 year history.

IMC was a large and varied nation that had its fair share of important landmarks - its capital, Wilson Town, was home to many of these locations such as the IMCs main Vault named 'The Goldenglow estate' which was a very large structure able to be seen from almost anywhere within the capital.

Elsewhere you were able to find the historic town of Ellen which had been once the location of the old nation of Pandoria. This town had a very distinct and different style of architecture due to its past owners and it had also been decorated with numerous Truffula-Trees and Five Nights at Freddies heads by the ancient Pandorians.

Close by to Ellen was the location of The Netherview Vault which was a hypervault under constant construction. It was here where you could find UB40 and his many conscripted diggers crying within its pits.

The Battle Of No Historical Significance

The first event of IMC on civclassics happened in the December of 2017 when a 9 man poorly geared team of IMC/TKON was assembled after being called by ComradeNick to help him fight against Blackwater. They launched a mission to pearl Posedion and Saren_solaris which was coordinated by Wilson5756.

The plan was to attack an island by sea near 0,0 which was supposedly home to the two, obviously this ended badly and concluded with all but 3 of the team being killed. This failure is often attributed to Impactic, who (during the fight) broke everybody's boat for a 'joke'.

Impactic succeeded in pearling Posedion - however was forced to drop the pearl because their armor was too badly damaged for the kite back to their base.

All in all the operation was quoted as being 'a disorganized shit show'. 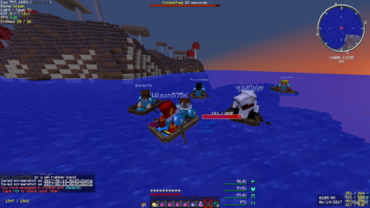 The doomed crew briefly paused for a photo opportunity before the operation began , unaware that only 3 would survive.

Despite IMC leading a fairly secretive existence it maintained decent relations with most nations, however it was closest with The Commonwealth due to their history of cooperation and their geographic close proximity.

It also upheld a shared defense pact with the small nation of Wolken, which came about after Dark_Muffin23 and GeoAnchoxmas had aided Wolken in its defense against a group of Raiders within its territory. This defense ended up with Muffin personally pearling 6 raiders that were then exile pearled and held in the IMC vault.

Everyone (aside from Hjaltland) enjoys the organic, wholesome and farm-to-table non botted IMC XP. Wilson5756 wrote, mixed and performed a SoundCloud rap in order to boost the IMC XP brands public image.

Retrieved from "https://civwiki.org/w/index.php?title=IMC&oldid=49533"
Categories:
Cookies help us deliver our services. By using our services, you agree to our use of cookies.