The Conference of Eastern States (CES) is a regional alliance in CivClassic 2.0 comprised of nation states in the +,- and +,+ quadrants. Initially proposed by Caledonia to Cortesia Del Mar on 4 May 2021, the alliance is intended "to help grow the smaller nations in the [east] economically and open more communication". The CES is focused on internal cooperation and development, and only maintains foreign affairs apparatuses out of necessity. 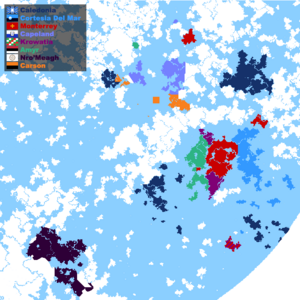 The claims of the eight CES member states

The CES Treaty is generally considered to be "squishy", in that its lacks many automatic enforcement requirements (instead leaving it to CES member states to determine when treaty violations require correction) and makes deliberate use of subjectivity. However, it lays out a clear system of roles:

The job of the Alliance Representative is to

The Leadership Council is a

The Security council is a

On 24 May 2021, talks were officially established between Caledonian and Cortesian dignitaries to negotiate the formation of an alliance between nations in their geographical proximity. Soon after, two other DUMP member states in Blackwell and Monterrey agreed to partake in the new venture. Concurrently, owing to DUMP, "no longer ... providing defense nor prosperity,"[1] Cortesia Del Mar, Blackwell, and Monterrey unanimously agreed to dissolve that alliance.

On 13 July 2021, the Nro'Meagh tribe of Jevoghnya requested admission to the alliance. It was officially accepted on the 19th.

On 17 August 2021, Blackwell was placed under Caledonian stewardship with its consent.

On 25 August 2021, the entirety of Nro'Meagh was admitted to the CES in place of Jevoghnya.

On 21 August 2021, the AF-CES Partnership was established.

On 29 August 2021, Carson accepted an invitation to the CES after several weeks of the latter's deliberation.

On 1 December 2021, Lambat voted to leave the CES following nine days of internal debate and division.

Retrieved from "https://civwiki.org/w/index.php?title=CES&oldid=46048"
Category:
Cookies help us deliver our services. By using our services, you agree to our use of cookies.