The Trans State of Duckapore is a Nation located offshore to the East and inland in the West of Napistan. It is bordered by Acadia to the north, Carbon the South and the IWW to the North, South, East and West. Duckapore is a Trans Apartheid Ethnostate ruled by Queen Heyduckhi and the Trans Liberation Organisation (TLO). 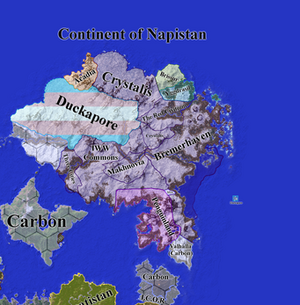 Map of Duckapore's territory
Duckapore was founded by heyduckhi on the 7th of April 2020 on the artificial island of Duckapore. It was formed as a refuge for the persecuted trans ethnic minority in CivRealms. Duckapore was immediately thrown into turmoil as the Peoples Republic of Bremerhaven accused it of mistreating its cage-bound immigrants. Crisis was averted, however, as the Duckapore Ministry of Truth was quick to dispel the accusations and assure the people that the immigrants had been adequately fed.

During the Columbia Crises, volunteers from Duckapore took part in protests against the occupying forces of TRE.

Hell War and the founding of Iowa

On the 21st of June, during the Hell War, Duckapore, as compelled to by the LSA, took part in the conflict. This manifested not in direct combat, but in Queen heyduckhi founding the settlement of Iowa ~200 blocks from Hell Vault with the mysterious figure known simply as John Delaney. Iowa has been confirmed to still exist on the outside of Olympia's border trench as of the 9th of August 2020.

On July 3rd 2020, Duckapore expanded its claims eastward into unused IWW claimed land ending close to the Wesser River. Building on empty land, Duckapore set up multiple farms, mining outposts and built a defensive bunker to consolidate its claims. This was not unnoticed by the IWW, who initiated proceedings to start action against Duckapore. Having at this time already had its claims consolidated physically and on a map uploaded to the CivRealms Reddit, Duckapore saw these claims as rightfully theirs and viewed the IWW's claims as meaningless crayons without any physical relevance. Eventually the IWW initiated negotiations with Esorscher as mediator, however, Duckapore saw this as inequitable due to the severe over-representation of the IWW compared to Duckapore in these negotiations and as a result did not take part.

By July 15, the IWW released a list of demands to Duckapore which would more than halve the territory which was claimed as well as restrict building in claimed areas and disabling existing Duckaporean defensive military infrastructure with the threat of action within the LSA if the demands were not met. This proposal was almost immediately refused by Duckapore which led to a back-and-forth between Duckapore and the IWW, both presenting their sides on the reddit. No physical action was taken as a result, however, a vote was started within the LSA to remove Duckapore from the alliance.

Beginning on July 22, actual negotiations began to take place between Duckapore (represented by heyduckhi) and the IWW (represented by ADAM/coolking) with equal positioning of both nations. After 3 days of negotiation, fair terms were eventually reached and the Treaty of Faith was signed on the 25th of July 2020. Duckapore would rescind a small portion of the claimed land and recognise IWW's claims and the IWW would recognise Duckapore's claims. An NAP was entered between both nations and future communicative protocol was outlined. Finally, the vote to remove Duckapore from the LSA was removed. Though representing the 'official' end to the cold conflict, the relationship would remain tense between Duckapore and the IWW especially in regards to heyduckhi's citizenship of the IWW and relationship with other members. This was made evident by the breach of this treaty by the IWW on the 11th of August 2020 with the pearling of heyduckhi during the IWW Reformation/Schism. heyduckhi was later released on the 14th of August upon the founding of the USSN.

On August 22nd 2020, due to concerns over national safety following the attack on Brissur by citizens of the USSN/BRS, Duckapore sought safety and approached Convoy in order to join as a Vassal of Carbon. This was accepted with terms including that Duckapore was not to start war and avoid causing drama. Duckapore's closest allies Three cities and Bremerhaven, who share many citizens including leadership with Duckapore, would also join Carbon over the following days.

On October 17th 2020, Queen heyduckhi, upon the ideological basis of climate accelerationism, began the process of colonizing the territory known as Eisberg. The initial stage of this involved the repeated murder of the general of the Trans Liberation Organisation, EzriTigris (Also known as the Desire Cube) who was the sole inhabitant of Eisberg. When her dominance over the the now thoroughly-subjugated EzriTigris was established, the harvesting of the landscape of Eisberg began. Queen heyduckhi quickly realized the immense profits that could be made off of the ice that she harvested from Eisberg's iceberg-based landscape and founded the Duckapore East Eisberg Company in order to further facilitate her goals of climate accelerationism and profiteering off of Eisberg's ice.

In response to the brutal colonization and exploitation of their homeland, General EzriTigris lead a military coup against Queen heyduckhi. Many casualties were suffered during the conflict, most notably Narwhal_19 who was killed as a result of an accidental munitions explosion on his way to assassinate Queen heyduckhi. Eventually the coup turned into a war of attrition due to the use of huge numbers of caged immigrants as frontline urban-warefare fighters on both sides as well as the sheer tactical brilliance of both General EzriTigris and Queen heyduckhi. Due to the use of these caged immigrants, the food supply situation in Duckapore became dire on both sides, resulting in mass casualties from starvation. Eventually, Queen heyduckhi, in all her benevolence, could no longer justify starving her people to such an intense degree and stepped down from the throne of Duckapore. General EzriTigris's coup was successful, and heyduckhi was coronated as the 6th Queen of Duckapore.

Duckapore is an absolute trans-monarchy led by the reigning monarch, Queen heyduckhi. The Queen is the absolute ruler and decision maker, however, subordinates in The Trans Liberation Organisation act as an advisory body and also manage elements of the every-day management of the state.

The Duckapore Royal Family is currently led by heyduckhi who is also the only member of the family. Turns out trans people can't have natural children so expanding this may prove difficult.

The Queen oversees social, economic military and political matters and is the leader of all legal Duckapore parties.

The Duckapore Femboy Party functions primarily as an advisory body to the Queen and holds values of Pan-Napistanism and Shia Islam. It leads Duckapore in coalition with the SEXY Party in the Trans Liberation Organisation (TLO) under Queen Hiduckhi.

Formed by Duckapore citizen and member of the Queens advisors, Bonegrieve, the SEXY Party is a radical Queer Supremacist party. It runs on a platform of Hetero-phobia and vehemently supports the Duckapore Monarchy. It is a leading party of Duckapore, ruling as part of the Trans Liberation Organisation (TLO).

The Trans Liberation Organisation (TLO) was formed on the 13th of August as a coalition between the Duckapore Femboy Party and the SEXY Party. It is the leading political organisation in Duckapore and is responsible for the management of the country as well as serving as the chief advisory body to the Queen. The TLO also acts as a paramilitary organisation in order to maintain national security if ever needed, however, peaceful resolution is always the preferred option to conflict. Taking influence from both the Duckapore Femboy Party and the SEXY Party, the TLO holds Shia Islam, trans rights and queer supremacism as paramount in importance to the stability and prosperity of Duckapore.

Treatment of political opposition and dissidents

There is no political dissidence in Duckapore.

Duckapore Island is an artificial island located to the East of Napistan. The island is shaped like a duck and the different parts of its 'body' fulfil different functions. On the islands 'head' is the immigration and customs centre. On the 'cloaca' is the Duckapore National Pub as well as alcohol making facilities. The 'egg' serves as the detention facility for illegal immigrants as they are assigned new parents and fed sufficiently. The 'legs' serve as sugar cane farms.

The Duckaporean claims in Napistan consist of former Jotunheim claims including the Mountain city of Jotun. Duckapore covers a large amount of mountain ranges and ice-fields as well as the north of the Wesser River where there are farms and guardian statues.

Jotun is the largest city in Duckapore's Napistan claims and is located within a mountain in the centre of these claims. The mountain was originally hollowed out by the tireless workers of Jotunheim before the claims were given to Duckapore.

In honour of Allah, a large Allah Cube has been built in order to provide a place of worship for Duckaporeans. It is located in a valley ~300m from Jotun.

BivGorb was founded on Duckapore Island with the foundation of the nation as a whole selling commemorative eggs and commemorative alcohol upon its opening. It serves as the vehicle of international trade for Duckapore.

BivGorb currently has locations in:

The state religion of Duckapore is Allah. This came after the pilgrimage of Queen heyduckhi to the Chungus Allah Cube in early July 2020. Duckapore citizens are expected to maintain a constant state of taqwa with failure to complete a regular prayer routine being severely punishable. The Duckapore Central Government has constructed a Kabaa, which remains the largest allah cube on the server, in order to honour the one true god.

Duckapore's discord is a complete disaster. It has several channels for different purposes but all of them are used regularly as shit-post channels. It is not uncommon to have multiple conversations occurring simultaneously between the same people in different channels. This has become a major element of Duckapore's culture.

Egg_2 is the national deity of Duckapore. Its earliest known appearance in Duckaporean archives is the 10/5/20 when Bonegrieve said "everybody gangster until egg_2 walks in." Due to the revelation of Egg_2 coming during the Great war, it immediately became a symbol of hope and resistance to shittery. Praises of Egg_2 flooded the discords and the subreddit, fighting valiantly against the tide of toxicity. Quickly, Egg_2's grace was spread throughout The Coalition, becoming a mainstream symbol in many discords such as Carbon. On the 10th of October, a post was made by Bonegrieve explaining the history and relevance of Egg_2. This is vital reading for a full understanding of the origins and glory of this truly amazing beacon of hope.

Retrieved from "https://civwiki.org/w/index.php?title=Duckapore&oldid=37899"
Categories:
Cookies help us deliver our services. By using our services, you agree to our use of cookies.