CivCorp City was a sovereign city state on CivRealms located near the center of the map. The city and corporation were founded on the 4th of November, 2019. It served as a major economic hub for the entire server up until its destruction, providing floating exchanges and rented plots out where players could sell items at shops. Currently, plot dues are indefinitely suspended after the attacks. The city is currently disputed territory between its directors and the USA.

On 25th September 2020, over a dozen accounts appeared in CivCorp and started to bomb it with obsidian. This operation had been planned, and 24 hours before the attack, the bastions were broken. The bombers represented a broad coalition of fighters who disagreed with CivCorp's principles, including members from Blackwater, Chungus, and Boris.

It is currently not safe for shoppers to enter CivCorp City or its surroundings. All travel is strongly advised against. 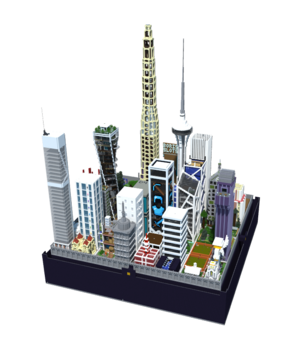 CivCorp City was founded on the 4th of November, 2019 by MCSPenguin and TopWolf and construction of the city began shortly after. The city was laid out after an agreement was signed with Trinacria over the use of land close to the Wheatistan and Varathia border. By early December, most of the city had been laid out and the first private construction began.

Up until its destruction, it served as a major economic hotspot in the East Coast Region.

CivCorporation as an entity was a private corporation with a number of shareholders who decide the company's board of directors. There were five directors, including the two founders, MCSPenguin and Topwolf. The remaining directors were Convoy, esorscher and HilmPosey.

CivCorp never had an official currency, but most trade in the city used stamina as the currency. All the exchanges in plot E5 used XP bottles, making them function as a kind of currency in the exchanges.

Retrieved from "https://civwiki.org/w/index.php?title=CivCorp&oldid=45700"
Categories:
Cookies help us deliver our services. By using our services, you agree to our use of cookies.