From CivWiki
Jump to navigation Jump to search
Hell (colloquially Hell Gang) refers to the group of defenders of the Hell Vault first formed during the events of the First Hell War. Their claims were taken from the former Carbon (CivRealms 2.0) land immediately surrounding the Hell Vault. The members of the nation came from several now defunct nations, Savaguard, Eslenti and Boris. 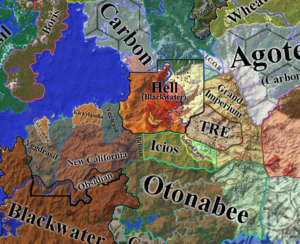 Following their defeat at the hands of the first coalition during the aforementioned war, the group joined Blackwater (CivRealms 2.0) in Operation Paperclip[2], joining Blackwater in several minor conflicts, most notably in alt-raiding attacks on Venice [3]. Hell also began construction on a new vault within Blackwater's western claims (former Calormen), Ascension Vault.

Not much is public about the nation's internal structure, beyond their particular affinity with all things monkey related.


Retrieved from "https://civwiki.org/w/index.php?title=Hell&oldid=39970"
Categories:
Cookies help us deliver our services. By using our services, you agree to our use of cookies.