Acadia, officially the Federal Republic of Acadia, or Dorei'Nothlir o Akkadye is a nation in CivClassics. It is a federal parliamentary constitutional republic situated within the Northeast (+,-).

It was founded prior to the launch of CivUniverse, roughly in Early October/Late September 2020. In CivU, Acadia became known as a newfriend nation, and as such was one of the largest nations on the server. It prides itself on its democracy, freedom, and emphasis on building. Acadia is currently known for being very underdeveloped for a nation of it size, lacking any high-tier factories, or industrial-scale XP production. Acadia is one of the northernmost nations in the world, which is sometimes a hindrance due to transportation issues. It possesses a fledgling alcohol industry. The nation moved to CivClassics in March 2021.

Acadia was one of the first nations founded on CivUniverse. Undeterred by the risk of shitters and toxicity, Cortwade, the first Prime Minister of Acadia, sought to make a new group on the newly-born server. Initially, things went well. Acadia was a small, isolated nation, and was a founding member of a large regional UN-like organization. Eventually, Acadia ballooned to be one of the largest nations on the server. However, due to a rise in toxicity in groups such as New Vegas and Cincinnati, and the outbreak of the Coalition War, Acadia's population quickly dwindled. Numbering around 30-strong at its peak, Acadia only had roughly 10-15 active citizens when the decision to move was made.

Cortwade decided to establish claims on March 10th, 2021[1] for the Republic of Acadia. However, the vote to transfer the country from CivUniverse to CivClassic wasn't held until April 3rd to 4th, 2021, and passed. The Great Migration of Acadia took place on April 24th, 2021, and consisted of VCs and general merriment. Appointed to assist with the movement for the migration was Juniortide.

With the founding of New Turing, the capital was formed. Unlike on CivUniverse, Acadia decided to have internal states, and moved away from one settlement states. The State of Babbage was formed shortly after the Capital Territory, with the city of Lovelace, founded by Owain X. The first expansion of Acadia took place when Pandastical claimed part of the Lewis Archipelago for his personal use, and chose to merge it into Acadia. Further settlements were made over time, including Kanava- a notable port city on the east coast of Acadia.

Slowly, Acadia began developing itself. This was, and continues to be a struggle due to low activity. However, New Turing, Acadia's Capital, now boasts a public works which is slowly filling with basic factories. A couple of determined citizens have taken the initiative upon themselves, and private XP production has begun on a small scale. The various settlements are slowly taking form, with New Turing in particular building its first permanent homes and shops.

Notable citizens during this period:

Acadia is officially a federal parliamentary constitutional republic, with considerable powers being afforded to the executive branch. It is guided by the Constitution of Acadia. Acadia's head of state and government is the Prime Minister, who is elected on a 2-month term. The Prime Minister is in charge of most executive duties, including but not limited to, chief diplomat, holder of the namelayers, and executor of passed laws. The Prime Minister presides over the Senate, a legislative upper body composed of the Prime Minister, all other Ministers, and a representative from each state.. The Senate may pass laws without the consent of the lower house, the National Assembly, but these laws may be overturned. Ministers are the head of Ministries, which are specialized government organs established by the National Assembly. The National Assembly is composed of all willing citizens, and can pass laws, impeach elected officials, and amend the Constitution of Acadia. The National Assembly may appoint a Chief Justice to deal with any Judicial cases, be they civil or criminal, or instead call upon a Joint Session of Parliament in what's known as a Supreme Tribunal.

Acadia holds elections once every two months, in accordance to the Constitution of Acadia. Several political parties have formed and run candidates.

The APP is a center-left party that prioritizes individual rights and freedoms. It aims to allow prosperity and peace in accordance to Ashaharist values. However, it is a secular party and also advocates for the freedom of religion for all Acadians. It wishes to institute strong individual protections in order to ensure the freedoms and rights of Acadians are protected from those that would wish to take them away. While it supports capitalism, it wishes to regulate it in order to prevent the exploitation of workers and natural resources. To date, all Prime Ministers of Acadia have been part of the APP or its predecessor, the Progressive-Snow party.

The WAP is one of the newest parties in Acadia. Founded originally as a joke, the party quickly morphed into a serious opposition bloc. Though its values aren't radical, it is certainly the farthest party from the center in Acadia. It values collectivism and freedom, and wishes to prevent the ruling class from oppressing the common person. It seeks to reform the nation to allow for collectivist practices, and has signaled that it would attempt to abolish private property, something that would require a constitutional amendment. In the July elections, it secured 3 out of 6 seats, nearly reaching a majority.

The VPA is the newest party in Acadia. Based on "transhumanist" and "futurist" teachings, the VPA is the closest Acadia has to a technocratic party. It seeks to further Acadian industrial power, boosting the economy. It seeks to trade with foreign nations, and allow Acadians to augment themselves with the best equipment avaliable. To date, it has failed to get a seat in the Senate.

The NDP is one of the oldest parties. The only true right-wing party, the NDP has been a staunch supporter of expanding Acadia's military power and becoming more well-known on the international stage. It has signaled support for joining the large alliance blocs prior, but has yet to be elected to any federal positions. The NDP believes that capitalism is a waste, and that only state corporations should be chartered to manufacture goods. It has been known to issue staunch militarist rhetoric, and was one of the fiercest supporters of the intervention in the Lewis Islands.

The second party to be formed on CivClassics, the ATPP was a short-lived center-right party. It believed in minimal governmental interference in day-to-day life, and staunchly supported businesses in Acadia. However, it faded before it could establish many policy goals, due to a political suicide maneuver when an ATPP member started a vote to strip Babbage of statehood, causing the Senator of that state to defect to the ATPP. At the time of its dissolution, the ATPP was the only opposition party to have held a senate seat.

The Progressive-Snow Party was the direct predecessor of the APP. Formed Pre-migration on CivUniverse, It held mostly the exact same policy stances as the APP, and contained most of the same members. It was dissolved during the Great Migration.

The Solidarity Party was a leftist party in CivUniverse. It held many of the same views as the WAP does today, though it was not so anticapitalist. It was dissolved due to a lack of members and interest.

The Libertarian Party, or GRILL, was a center-right party on CivUniverse. It held many of the same policy views as the ATPP did, however it never reached federal power. It was dissolved during the Great Migration. 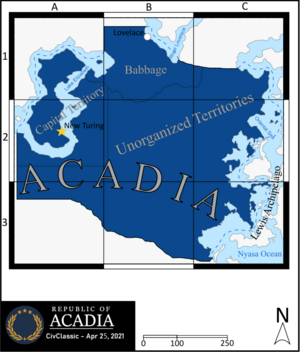 The oldest and largest city in Acadia, New Turing is situated on the island within Lake Elizabeth, with the Public Works, many residences, and the beginnings of several businesses. It is a planned city, with zoning and build codes in effect. It is led by Cortwade, who also owns Wade Winery, situated in New Turing. Notable places include Perseverence Square, Riverfront Street, and the soon-to-be-built Capitol Building.

A controversial state, the Lewis Islands is the newest state in Acadia and holds most of the island territory in the Lewis Archipelago. It has the largest population of any state, and is rapidly developing in multiple small townships. It was born out of a federal occupation district after the annexation of the Kingdom of the Lewis Islands after its status as a rogue state.

Founded by Owain_X - Capital city of the state of Babbage. It houses many notable buildings, including the tallest in Acadia. It has many areas for sale or lease, and is actively searching for new citizens.

The Lovelace Tunnel is dug through the hills between the Lake Elizabeth to River Lovelace. It has pathways and a canal the entire route, allowing for boats.

Located on the far east coast, the defining measure of this developing city is instead of roads, it has canals. Its nearest settlement is in the Lewis Archipelago.

Built by ScammerSteve to connect the River Lovelace to the city of Kanava, it is a 2 wide water tunnel that goes under the Acadian countryside

Retrieved from "https://civwiki.org/w/index.php?title=Acadia&oldid=39790"
Categories:
Cookies help us deliver our services. By using our services, you agree to our use of cookies.