The Kingdom of Wyvern, commonly known as Wyvern (/Wy-vərn/) was a nation that was active during CivUniverse 1.0 and was one of the most active and richest nations on the server. The nation became known for having the largest Melon and Wheat farms on the entire server. On the 12th of December Nymph reformed into the Kingdom of Wyvern and adopted a consitution with Seekinq as its King, with him later stepping down in favour of alexmelons a few months in, when the server released they quickly found themselves in the Southern Continent and started work on the Crownlands for Wyvern by designing stuff in advance on its own build server, Wyvern grew huge in numbers way past what Nymph or Kraken had ever achieved and became known as a peaceful and wholesome buildfriend nation who gave out free melons, a holy item in Wyvern Culture, When the War started Wyvern conformed to a strict policy of Armed Neutrality, dispite CivUni overall being a toxic experince for many players Wyvern was so disconnected from it all that it never really experinced it, most members of Wyvern look back on it as a fun time due to not getting involved in the toxic affairs of the rest of the server. 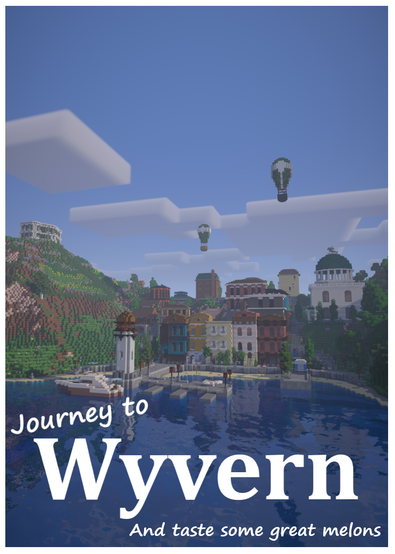 Travel Poster for Wyvern showing the Crownlands, The Capital

Wyvern was an Elective-Monarchy with elections being held among its council of Dukes and Duchess’ upon a vote being called for a new King or Queen, with local administration handled by the Dukes or Duchess’ of their corresponding Duchies, each Duchy usually has its own build theme and economic specialization and ensures the nation can be home to different types of players.

The Kingdom also holds 2 Colonies, which are being administered by the council.

Constitution of The Kingdom of Wyvern

alexmelons - Lord of all Melons, Duchess of Mellon and Queen of Wyvern

Seekinq - Duke of Elysia and Librarian

Grynghis - Thane of the Kingdom

ItzJoshs - Thane of the Kingdom

enimboy - Thane of the Kingdom

etheralto - Thane of the Kingdom

There were 5 Duchies at the end of CivUni, with there formerly being 6, each Duchy was ruled by the Dukes or Duchess’ of their corresponding Duchies. 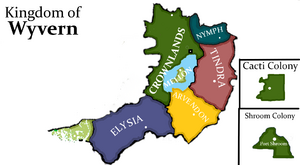 Map of the Wyvern Duchies 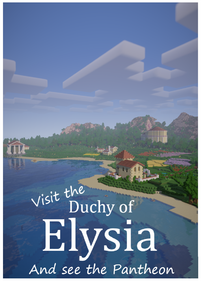 Elysia was a Greco-Roman style Duchy located in the South West governed by Seekinq, Duke of Elysia, it had a few Settlements and Temples along the coast of the Southern Ocean, it bordered the Duchy of Arvendon to the East on the Kraken River connecting the Crown Lake up to the Southern Ocean, the Mellon Swamp to the west, and The Empire of Javaya to the North-West.

Arvendon was a Medival style duchy located in the South East governed by JayTeeR, Duke of Arvendon, it was home to the Arvendon Castle and the largest Wheat Farm in the Kingdom, It bordered The Duchy of Elysia in the West along the Kraken River, The Duchy of Tindra in the North, and a Javayan Farming Colony in the South. 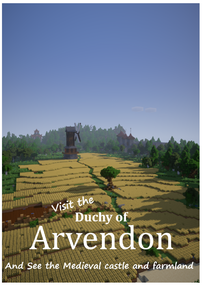 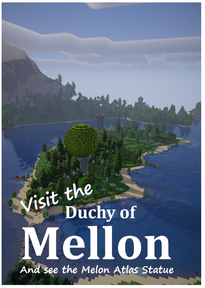 Travel Poster for the Duchy of Mellon, (Main Island Part)

Mellon was a duchy mostly located on an island in the Crown Lake in the centre of Wyvern but with a small part of it on the South-Western Swampland bordering The Duchy of Elysia, it was governed by alexmelons, the Duchess of Mellon and King of Wyvern, the Swamp was home to the Wyvern Melon Farms, the largest Melon Farm on the entire map, while the Island was home to the Melon Atlas Statue.

Tindra was a Oriental style duchy located in the West, it was governed by bbase, The Duchess of Tindra, it was home to the Highest Mountain on the map, and had a holy temple at the foot of the Mountain, it borders The Duchy of Arvendon in the South, The Crownlands and the Crown Lake in the West, The Duchy of Nymph in the North and the Kingdom of Savaguard in the East.

Nymph was a Mushroom styled Duchy in the North-East, it was the smallest Duchy and was made up of one town in a Mushroom/Fantasy theme with giant mushrooms acting as the buildings. it was governed and built by kiimmy, Duchess of Nymph, the duchy was founded after the desolvement of the Duchy of Farmeria on the 17th of Febuary. it borders the Duchy of Tindra in the South, The Crownlands in the West, and the Kingdom of Savaguard in the East.

Farmeria, formerly the Duchy of Farmeria, is now apart of the Crownlands, it used to be governed by ItzJoshs, the former duke of Farmeria, now a Thane, it used to be in the North-Western part of the Crownlands and parts of the Duchy of Nymph, which was founded after the Duchy was dissolved, Farmeria was home to many of Wyverns early games farm and produced quite a bit of its early game XP, it was home to many cabins and farms and was the most populated Duchy before being absorbed into the Crownlands due to its Duke, ItzJoshs being involved in the stealing of a horse in an another nation. 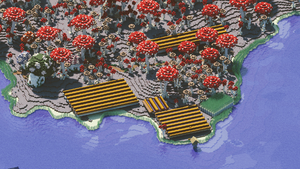 Render of the North Respite Territory

The North Respite Territory was a very small colony located on a Mushroom Island in the far South-West of the map on the otherside of the Continent of Hyperborea, its original finders from the Nation of Acadia named it Respite Island and claimed half of it for their own Farms, When Acadia and Wyvern entered in the Commonwealth of Southern Nations along with other nations such as Javaya and Chroma, Talks begun with Acadia to buy some of their Northern bit of the Island, along with some of the unclaimed part of the Northern Island to form the Wyvern North Respite Territory, It had the Wyvern Pumpkin Farms and the Town of Port Shroom, a town in a similar style of The Duchy of Nymph to fit in with the giant mushrooms in the biome.

The Desert Territory was a very small colony located in the Southern Continent just East of Wyvern itself, it was very small in size and just contained Wyverns cactus farm built by JayTeeR, Duke of Arvendon. 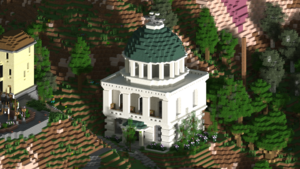 Render of the Wyvern Library, Circa February 5th 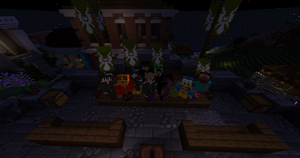 Screenshot from the Coronation taken by alexmelons, Circa February 13th 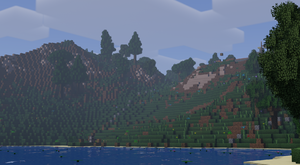 Wyvern Crownlands before any work was done, Circa December 28th

Throughout Wyverns time on CivUniverse they quickly developed some of their own culture based around Melons and a close knit community, Wyvern citizens would often pass each other melons or bread as a greeting and the phrase "Melon be with you" quickly became a way of saying good luck, Melons also became some what of a holy item to Wyvern and work began on the great melon farm, which ended up as the largest melon farm anywhere on the server. which funded the melons on the Great Melon Atlas Statue in the Duchy of Mellon, which was also named after the item, alexmelons, Duke of Mellon and King of Wyvern also had the title of "Lord of Melons". alongside Melons, Wyvern also had a special affinity for animals, Mainly pigs and horses, The affinity for pigs was mostly carried over from Nymph, While the horses were birthed from the need to get around the world faster due to Horses being faster than minecarts most of Wyverns travel was through horses instead of Railways, though some railways were constructed, for example the Duchy Rails, one to Javaya and one to Plexia, but they had limited use as most of Wyvern just used horses anyway. We also had the "Snail Racing" bot in our discord carried over from Nymph, which quickly became one of the most active channels with even people outside of Wyvern getting involved in the races.

The Kingdom of Wyvern celebrates real-world holidays and some special ingame holidays such as:

Retrieved from "https://civwiki.org/w/index.php?title=Wyvern&oldid=48031"
Categories:
Cookies help us deliver our services. By using our services, you agree to our use of cookies.