Nightwatch is an independent Chiefdom located in the central plus minus. Once under the jurisdiction of the Constitutional Empire of Sussex, now an autonomous region. The island lies north of Antietam, and to the west of Brutus.

On the south shores of the island, built upon ruins of old Appomattox, lay the wasteland recently named Absentia. In the north eastern area of the island you will find the rustic town of De Jure, the heart of the island.

In late July of 2021, LIQUID STEREO, a New Sovian citizen at the time, became good friends with Mount September citizen GarterSnake after Garter had signed up to become an mailman in Liquid's new busines. Garter voiced his displeasure with Mount September, saying it had too much red tape to be Minarchist and other concerns. Naive at the time, Liquid assumed all of these complaints to be true. It would later be revealed that he had built an replica of Auschwitz in Mount September to get an reaction out the citizens, to which SamBonusG payed 32 diamonds to him to remove it and leave Mount September.

When they began working on Nightwatch, they realized it would be hard to get the nation off the ground on it's own. So they approached their closest neighbor, Sussex (called Ch1pR Empire at the time) to become an colony of it, to which Ch1pR, the leader, gladly accepted. As it turned out, Garter was exceptional at recruiting and had almost ten people living in Nightwatch by early August. This made it one of the fastest growing regions in the server at the time.

The government system itself comprised of only Garter and Liquid, to which the latter made himself President for life. Even though it sounds like a dictator move to make yourself President for life, Liquid says it was so Minarchy would be assured. If someone else were voted in who didn't have Minarchist ideals, they could easily give the government more power and turn it into whatever they wanted. So to compensate for such an move, Liquid limited his power down to the bare minimum so the government stayed completely out of the lives of individuals.

Not long after Nightwatch became the most populated region of Sussex, Ch1pR appointed Garter to be the Cheif Advisor of Sussex. Privately, Garter said this would give Nightwatch more influence in the government and would use it to serve Nightwatch's best interests, an move which Liquid had mixed feelings on. However, this appointment would soon be used as weapon for GarterSnake and would be pivotal in Nightwatch's downfall. 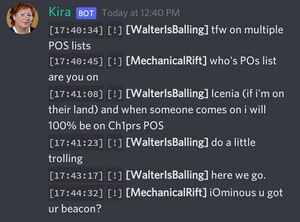 Walter declaring he is about to lavacast Sussex in Global

The beginning of Nightwatch's demise started when WalterIsBalling, an citizen in Nightwatch, betrayed them and lavacasted Antietam and Nightwatch. He turned himself in so he could have an say in his pearling via negotiation, however Garter pushed for Ch1pr to released his pearl so they could hunt him down and pearl him again so they could have the final say on his pearling sentence. This argument became incredibly ugly, but Ch1pR ultimately gave in and let Walter go, to the condemnation of his allies. 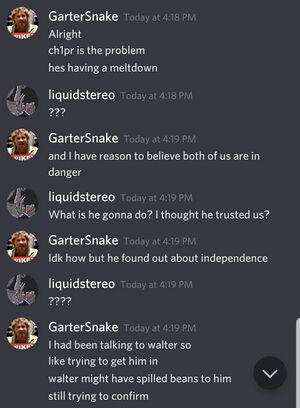 Garter attempts to shift the suspicion of snitching on Walter

Soon after this debacle, GarterSnake would mysteriously leave the Sussex server and block Ch1pR from contacting him. This was assumed to be due to the heated argument of Walter's pearl, but Garter would DM Liquid minutes later telling him Ch1pR was going to pearl him for treason and that he should flee. He said that Walter had told Ch1pR that Liquod was having thoughts of staging an rebellion to give Nightwatch complete independence, this was only an half truth. Liquid had thoughts about speaking to Ch1pR about peacefully becoming independent in September, hoping for good relations between the two nations, this was an idea he had only ever told Garter about. 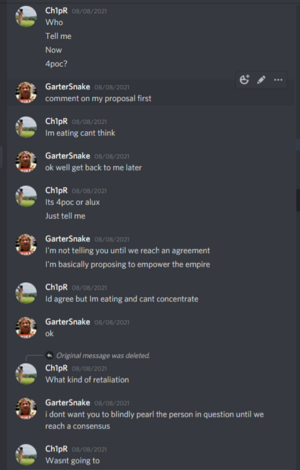 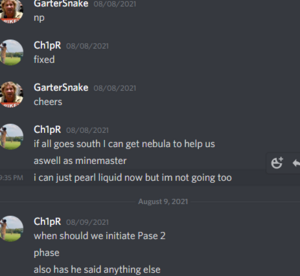 Believing Garter, Liquid quickly began packing his valuables and began making his way to his safehouse in an remote location in the server. However, while packing, Ch1pR DMed Liquid, asking him why Garter had left and that he knew about Liquid's idea of starting an rebellion. They had an lengthy discussion in DMs, including many screenshots and came to the realization that it was Garter who had told Ch1pR about the idea of independence, and had also dramatically changed the idea to seem more violent and threatening so it would increase the chances of getting Liquid pearled. Liquid then after made an reddit post exposing Garter and his manipulation of both him and Ch1pR. This reddit post got the attention of Garter, who had blocked both Liquid and Ch1pR at this point. He pinged them both in the Lambat server, revealing his ultimate goal.

He had planned to become powerful enough in Sussex to overthrow Ch1pR, because he considered him to be an weak and irresponsible leader. He needed to gain his trust, so he used Liquid's independence idea and dramatized it to get him pearled. It would then make it look like Garter was trustworthy, giving him the neccessary tools to overthrow Ch1pR for good and then free Liquid. This idea caused him to get heavily condemned by both Ch1pR and Liquid. The conversation ended with Liquid deleting the reddit post and Garter leaving CivClassic indefinitely.

In shame of the drama caused by Liquid's naivety, he announced the dissolution of Nightwatch as an autonomous colony and gave it wholly to Sussex. He also advised all people living in Nightwatch to leave for Antietam as it was all but abandoned. Nightwatch would be left in it's greifed state for over an month before Sussien, Gruebleen would decide to refound it, with Liquid giving him perms to everything.

With the most recent refounding of Nightwatch, there were many major changes made to the state. Due to the small population, the local markets and factories were moved underground, and the state began an island wide defensive infustructure project. After much isolation from the rest of Sussex working away in the underground, the people of Nightwatch saw little to no connection to the other Sussiens. Gruebleen created the Wachuan tribe, and announced himself chief of the Nightwatch underground, after winning a majority vote between the states citizens. A few months later on Friday, November 19th (now a national holiday known as night-day) the island went independent at last.

The islands native tribe the Wachuan people, have been known to be sceptacle and occasionally hostile towards uninvited guests exploring the underground of Nightwatch. 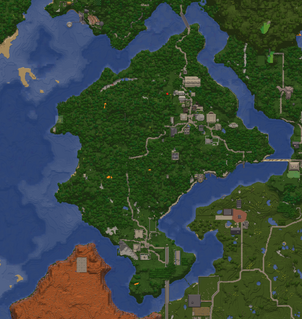 The state of Nightwatch is known for funding the first fighter jet of Sussex, and creating the NW Arial Taskforce℠, the first Sussien air force.

The economy of Nightwatch mainly consists of brewers and traders, exporting goods to industrial and commercial districts around the globe. Notable mention is the founding of  companies "G&L Vices™", and "Nightwatch Pharmaceuticals™".

Retrieved from "https://civwiki.org/w/index.php?title=Nightwatch&oldid=43756"
Category:
Cookies help us deliver our services. By using our services, you agree to our use of cookies.