The Sussex Empire (formerly the Ch1pR Empire) is a sovereign nation formed on the 24th of June 2021.[1] It borders Lambat to the north, and New Sovia to the East, and is located in the +,- quadrant. The Sussex Empire Encompasses lands the used to belong to Appomattox, which became inactive. The user Ch1pR, leader of the Empire, has vowed to preserve the great and historic cities of old Appomattox. The Sussex Empire was referred to as the “Most Depressing Nation on Civ” due to recent drama. As of November, Sussex functions as a virtually inactive or de facto one-man nation (OMN), with most of its players moving on to other nations within the server.

On August 27th, Ch1pR announced on discord that LIQUID STEREO would be temporary emperor of Sussex and subsequently announced he had been pearled by BennyZ. The next day however, Liquid announced his leadership was unfortunately no longer temporary after speaking with Ch1pR in private and him deciding to leave Civ for personal reasons.

The next day, Liquid made his last executive order as Emperor and ordered the immediate passing of the Reconstruction Act, which gave way to the creation of the United States of Sussex. The USS used a representative democracy as a form of government and made a heavy emphasis on states rights.

Claims of Sussex as of November 2021

End of the Republic

This government lasted until September 19th, when Liquid quietly gave Sussex back to Ch1pR after hearing that he would be freed the following week. After being unpearled, Ch1pR took back over Sussex completely and dissolved the USS for good, a move which was semi-controversial and was met with talks of a coup by certain citizens. This coup would never come to fruition however, and the people associated with the coup had their citizenship in Sussex revoked.

Liquid after this change willing moved back into his position as Chief Advisor to Ch1pR. A position he still serves to this day.

Although a Monarchist government had taken over, positions in the senate were still available after transferring power from a democratic nation to an empire. A senator is allowed to vote on bills first, along with the Chief Advisor. After senators have voted; It passes to citizen voting. With all remnants of a Democracy not being destroyed. Two political parties emerged from this; the Free Trade Party (FTP) and The Sussex Nation Imperial Reclamation Party (SNI-RP). Both are right-leaning with their ideals and platform. Despite SNI-RP being larger, inactivity means the elections are, for the most part, balanced.

As stated, Sussex still has a lively political scene. While its voting system is FPTP, with addition for tiebreakers has created a two-party system. Both parties are right-leaning ones, on economic and the other has expansionist viewpoints. There is still room for representation of other sides of the compass. While some go unaffiliated, this barely gives votes in the modern scene. If elected, they can rarely pass laws. The only unaffiliated senator to complete a term in office is SomeoneOk. The only other unaffiliated senator was r for slander before their senate term could end. However, this was back in a period where political parties were disorganized.

After an argument on the State Religion of Sussex, the two parties had realized that their ideology, is similar. They decided on a potential merging, and it's currently looked like it was going to pass; If it would've passed, Sussex will become a one-party state. Seemingly to be close to 100% right-wing. However, talks of a merging has fell out and the parties will remain split, and in seeming equilibrium.

*While the candidates did have a party affiliation. They were only one member parties.

*While the candidates did have a party affiliation. They were only one member parties.

This election was a little confusing as someone was impeached for slander in the middle of their term. So they came up with a replacement elections. You may only vote for one person, and it's FPTP as well. The winner takes the seat of the impeached and holds it for the rest of the senatorial term.

*Meme Party, not just a one person party.

Since the passing of the Governor's Act, several states emerged; The type of government can vary from state to state. The most extreme being Paradisus. On October 26th was closed off due to recent events, forming a religious police state. Most other states, however, have opted to share a government form with the nation. The current provinces in Sussex are Antietam, Avalon, South Antietam, Nightwatch, and Paradisus. 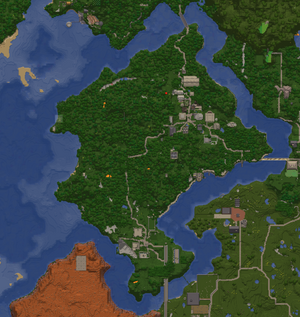 A map of Nightwatch from their wiki.

Nightwatch was the start of the history of the nation. In late July of 2021, Nightwatch was established by two people. It joined Sussex to become a colony for support of the new nation-turned province. Liquid had made himself President for Life to assure a Minarchist regime. Unfortunately, after a long series of intrigue and backstabbing stated in the Nightwatch Page, the government had fallen and disorganized. The previous government handed complete control of the land to Sussex to the government. However, it was re-established by Gruebleen, Nightwatch becoming a state after the Governors act.

Formerly known as Tabata, initially unorganized, after two days of playing Civ, SomeoneOK was granted the land by the current President, LIQUIDSTEREO, as a sign of friendship. Someone received the task to restore the cathedral there. The cathedral is close to completion as of November 2021. Except for some materials that are hard to obtain. After the passing of the Governor's Act, he quickly reformed the nation into a Theocratic Archbishopric. Keeping the same government until recently in some drama the governor was in, he transformed it into a Police State after being tired of the Reddit post causing drama in the nation.

Avalon is almost as big as the entire nation itself, which has become quite a joke, as the governor claimed the world plus some past the border. Avalon stretches far in the +,- region. Split into two different masses, all of the state is held by one person, the governor of Avalon.

Retrieved from "https://civwiki.org/w/index.php?title=Sussex&oldid=49521"
Categories:
Cookies help us deliver our services. By using our services, you agree to our use of cookies.