Kingdom of the Acadian Lewis Islands

The Kingdom of the Acadian Lewis Islands (KALI) was an OMN (one man nation) in the Lewis Archipelago in the +,- quadrant on CivClassic, founded by Pandastical, that existed briefly from late May 2021 to early June 2021. It was situated right to the east of the Acadian mainland, and to the west of the Kingdom of Fish, comprised of one of the main islands of the western Lewis Archipelago. Its existence was ended by the annexation by Acadia and the region's reinstatement as an organized territory within the Federal Republic of Acadia after ~two weeks of continued drama.

Originally, KALI was Pandastical's personal/private land, separate from Acadia and unclaimed by any nation, originating from around late April 2021 with the move of Acadia from CivUniverse to CivClassic.[1] Not long after Pandastical chose to merge it into Acadia as a an 'organized territory' within the federal structure.[2] The territory was named after the Lewis Archipelago and thus became the Territory of the Lewis Islands. 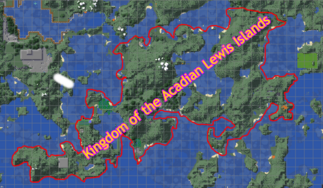 KALI at it's height

However, due to political disagreements with other Acadians and after seeing a series of bills he drafted vetoed by the Acadian Senate after passing the National Assembly, Pandastical seceded the territory from Acadia following legal procedures on May 30th, 2021. He declared the territory independent and called it 'the Kingdom of the Acadian Lewis Islands'.[3] While Acadia recognized the secession, they did not recognize the name of its new neighbor as they did not want to be accidentally associated or confused with the new nation. Acadia issued an official statement 'On the Status of the Lewis Islands' stating that it disavowed the usage of the term 'Acadian' and that it would henceforth recognize it neighbor as 'the Kingdom of the Lewis Islands'.

As a response, KALI banned all Acadians from entering its territory, which Acadia saw as an provocation. Acadia issued a new statement on June 2nd: 'On the Escalation from the Kingdom of the Lewis Islands', where it responded in kind and declared Pandastical to be PNG (Persona non Gratae) in Acadia until he removed the ban against Acadians, renamed the name of the OMN to remove the term 'Acadian', and paid reparations of 16 diamonds or 256 iron. Pandastical refused to meet these demands and mistakenly thought that Acadia had declared war against him. In what he thought was a response to this, he decided to declare war against Acadia. The result was a brief Acadian occupation of the island, 'the 40 Minutes War', until the misunderstanding was cleared up. Afterwards, Acadian participant Aelfred was tried and declared guilty of petty theft and vandalism committed during the occupation by Acadia.

Another dispute with Acadia followed immediately after when there was confusion about the exact recognized claims of KALI and the borders between KALI and Acadia. According to Pandastical, the Windsor Peninsula on the Acadian mainland was included in the secession bill approved by the Acadian Senate, and thus belonged to KALI. Acadia denied these claims and refused to hand over the peninsula, issuing an ultimatum for Pandastical to give up his claim on the peninsula. Within time however, the original secession bill was found, and as no exact claims or borders were included in the bill, and the bill did not refer to the Windsor peninsula, Pandastical agreed to drop his claim.

A couple days later a third dispute with Acadia followed as Pandastical published his flag for KALI, which included the Acadian flag in the upper-left. Acadia responded with indignation and saw this as another provocation from Pandastical, since he knew that Acadia dissaproved of KALI's stylization as 'Acadian'. After the series of disputes, this was the last straw for Acadia. Acadia responded by annexing KALI on June 10th, starting the Acadian Island War. With the annexation, Acadia claimed the surrounding islands as well and incorporated them into the reinstated 'organized territory' of the Lewis Islands. Pandasticals bunker was disabled with reinforced obsidian, and a close battle between Pandastical and Acadian fighter Druid followed after which Pandastical was pearled.[4]

Afterwards, Pandastical was put on trial for attemped murder on Druid by Acadia, as Acadia considered its presence on the islands legitimate given the annexation and did not recognize Pandastical's resistance as defensive for this reason. Acadia was represented by JuniorTide as prosecutor, Pandastical by Owain as lawyer, and Prime Minister Bloof served as acting Chief Justice. During the trial, the defense argued that a) since from Pandastical's perspective the events happened during a war on KALI soil, the acts were defensive in nature and that b) even if the territory were considered to be legally Acadian, Pandastical had a right to defend his property against the Acadian military who was accused of stealing a banner belonging to Pandastical. On June 11th, Pandastical was declared guilty and sentenced to two weeks of prison pearl and 1 year of exile pearl, however, the Acadian government eventually decided to only carry out a few weeks of the official sentence.

After the trial, Pandastical disbanded KALI and recognized its re-integration into Acadia.

Retrieved from "https://civwiki.org/w/index.php?title=Kingdom_of_the_Acadian_Lewis_Islands&oldid=50305"
Categories:
Cookies help us deliver our services. By using our services, you agree to our use of cookies.