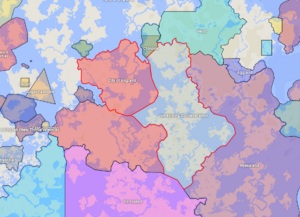 The claims of the Jomsviking Confederation and the City of England as of November 19, 2021

In November 2021, the Jomsviking Confederation was a young (~six-week-old) nation situated in the shallow +,-, consisting of a mix of old Nyasan players and new players, united under a Viking culture. The City of England, by contrast, was an old (having existed continuously since SOTW), small, building nation, which was at the time largely inactive due to it's kings DoofWarrior and GatorGlitch being on an international trip. Both were Plus-Minus Concordat members.
The Jomsviking Confederation had displayed interest in the City of England as early as October 2021, but this interest was largely brushed off as jokes about the Viking invasions of England. This interest however was fueled by a desire for a biome where Jomsviking could grow melons.

On November 19, at 1:00am EST, Bloof_ of Acadia pinged the two English kings to ask if they "[knew] about jomsviking taking over". Though cat_alunya of the Jomsviking Confederation was first to respond with "they dont care", DoofWarrior replied at 7:00am EST that "England is my city"; he replied that "we do care, we're not inactive". Within two more hours, it was confirmed by Seekinq of the Imperial Kingdom of Fish that England's alliance agreed with them; "PMC still recognises CoE as an independent state", wrote the fishy Emperor.

In the City of England, which Jomsviking had renamed 'Jorvik', the city bastion was broken and replaced with one under Jomsviking, protected with DRO. Additionally, all English banners and signs were removed from the city, which was now spammed with somewhere inbetween 100-200 reinforced Jomsviking banners and signs, and pig heads. After a couple hours of cleanup the damage was that same day undone by tomattan (Acadian) and a number of CoE citizens, while the diplomatic crisis was still developing.

Quickly, support for England arose. According to FE_Flags, as of 9:30am EST, England had the support of "Acadia, Fish, Eon...Parts of the NDI and NWO, and Dankia"; indeed, this was likely an underestimate, as many players from Columbia, Sussex, Eddie Murphy, and Yoahtl all voiced support for, and in many cases intent to fight for, England in this time. In the following hours, first LIQUIDSTEREO and then GatorGlitch would make Reddit posts informing the world of the City of England's predicament, both of which were met with strongly positive responses.
In the end the Jomsviking Confederation officially backed down, rescinding its claims to England. However, many members of the Jomsviking Confederation continued to act as though England was theirs throughout the afternoon (EST) of November 19, as exemplified by CrazyWazy55's declaration that "we can say we own england all we want and you can't do jackshit about it", or Dubcek Yourself's reply of "no" to DoofWarrior's decree that "if jomsburg removes their flags and signs, we will not have any quarrel with them". As a consequence, Acadian Prime Minister Owain_X declared cat_alunya, Warmother of the Jomsviking Confederation, an legal citizen of Acadia, pearl-on-sight within Acadia for treason for "choosing to give aid and comfort to Acadia's enemies" unless she renounced her Acadian citizenship, and LIQUIDSTEREO of England pursued a campaign to kick the Jomsviking Confederation from the Plus-Minus Concordat.
The conflict was finally put to rest by 3:30pm EST, with the agreement of the Jomsviking Confederation to pay the City of England an unspecified amount of reparations.

Acadia's Prime Minister, Owain_X, briefly resigned amidst the chaos of the latter half of the Jomsviking-England Incident, before returning to office within the day.

Prior to the Incident, the City of England had been deeply inactive, not only as a consequence of its kings' vacation, but more generally as a consequence of limited engagement. The Jomsviking-England Incident snapped England out of this slump, spurring development and play. The introduction of LIQUIDSTEREO (by this point entirely without a nation, as both Partyland and Sussex had died) to the nation further augmented its recovery.

Collapse of the Plus-Minus Concordat

The collapse of the Plus-Minus Concordat, as visualized on yodabird19's alliance chart

On the day of the incident, Seekinq ironically referred to the Plus-Minus Concordat - the alliance which housed both disputing parties - as "the most stable alliance on CivClassics"; this joke would be realized much further than was known at the time. As a consequence of the incident, the seven-nation alliance found itself split, between the Jomsviking Confederation and Kallos (who had voiced support for the Jomsviking Confederation throughout the incident, though without direct intervention), and Acadia, Fish, Sussex, and England. Tho later Sussex Switched Sides due to a disagreement with Acadia. Though the contents of the PMC internal diplomatic channels are as yet unknown to the majority of CivClassic, the shape of events is clear: the alliance faced irreconcilable differences, and dissolved. The PMC officially ended on November 22, 2021.

In the wake of the PMC's collapse, England quickly set out to establish relationships with as many close nations as possible; at this it succeeded, securing arrangements with Acadia, Fish, and Avalon almost immediately. It applied for Augustan Federation membership, but was denied. England later joined the NDI as an Administrator (IE developed, leading nation) on November 24.

The Allied Mission for an International Guard Of Sovereignty, or AMIGOS, was publicized on November 25, 2021, as a direct successor to the PMC. Three out of the four member states of AMIGOS at the time of its creation - Kallos, Jomsviking, and Sussex - were members of the PMC prior to its collapse. The AMIGOS charter explicitly sets out that "members are not permitted to carry out offensive operations on each other, as that would be in direct violation of the defense & peace agreement of this treaty" - an improvement over its predecessor, if respected.

Retrieved from "https://civwiki.org/w/index.php?title=Jomsviking-England_Incident&oldid=46634"
Categories:
Cookies help us deliver our services. By using our services, you agree to our use of cookies.