From CivWiki
Jump to navigation Jump to search
For the new iteration of this alliance, see: United Northern Congress (New)

The United Northern Congress (UNC) was an intergovernmental economic and military alliance between 10 countries, all of which are located in the northern hemisphere of CivClassics, and was formed on the 3rd of August 2018 and effectively disbanded on July 13th, 2019. The UNC operated under a system of collective defense whereby its individual member states agreed to mutual defend each other in response to any attack by any external party.

The United Northern Congress operated on a system of collective diplomacy, with each contracting party placing their trust in an elected spokesperson. The spokesperson was the orator of the UNC, speaking on behalf of all contracted parties. 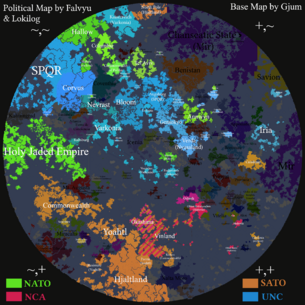 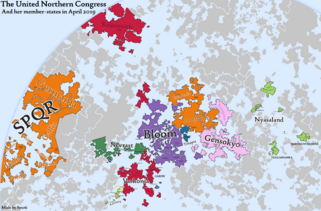 The spokesperson during this time, BritishWanderer, aided in the introduction of Corvus to the UNC, handled the UNC's collective response to the Nyasaland leadership crisis, created an infographic for the benefit of public PR, assisted in establishing a formal motto for the UNC and collected the response to the Icenian incident after his assassination. The spokesperson during this time, BritishWanderer, attempted to handle the internal and external crisis that became known as the Corvus incident. The spokesperson resigned on the 5th of July.

Retrieved from "https://civwiki.org/w/index.php?title=United_Northern_Congress_(Old)&oldid=44164"
Categories:
Cookies help us deliver our services. By using our services, you agree to our use of cookies.