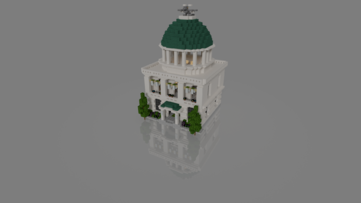 Render of the Royal Library of Wyvern by Seekinq
Seekinq, (/Seek-ing/) is a player who has played Devoted 3.0, CivClassics, ExpandMC, the CivRealms Beta, and CivUniverse. he is mainly a buildfriend and is known for designing various cities and towns throughout Civ, including Wyvern, Nymph and Cora. he has been King of Kraken, Nymph, Wyvern and Fish throughout his time on Civ, he is also interested in renders and makes them for his builds

Seekinq joined in November of 2016 on Devoted 3.0 and played in the nations of Ironforge and MTA before moving and founding his own nation of Asgard with some friends, though it did not last as it was made illegally in an already claimed area, after moving they founded the Nation of Olympus, and finally the small city state of Point Nemo before the server shutdown

On the first few days of Classics him along with some others founded the nation of Kraken on the 6th June 2017,, and was the chief architect of Central Kraken and Lethiathan, he stayed in this nation for around 3 months before growing bored of the nation due to being far away from the active cities at the time, on the 11th September 2017 he and a few others from Kraken moved to a beach near The Commonwealth and founded the city of Nymph, which shortly joined the Commonwealth as a borough, to which he served as the legislator for Nymph and as the King of Nymph-Kraken this was his main project for around a year on Classics before going inactive, He mainly designed the waterfront of Nymph city and also helped design things such as the Plaza,Canals,Streets,Stable,Barn and Clocktower, but after around a year of playing actively he grew inactive. 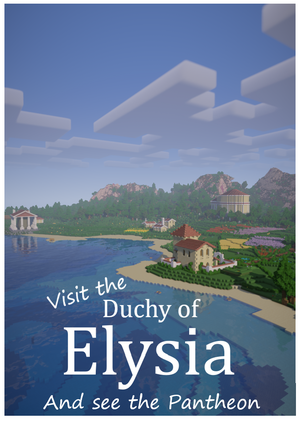 Travel Poster for his Duchy of Elysia on CivUniverse

On the 12th of December Nymph reformed into the Kingdom of Wyvern and adopted a consitution with Seekinq as its King, when the server released they quickly found themselves in the Southern Continent and started work on the Crownlands for Wyvern by designing stuff in advance on its own build server, Wyvern grew huge in numbers way past what Nymph or Kraken had ever achieved and became known as a peaceful and wholesome buildfriend nation who gave out free melons, When the War started Wyvern conformed to a strict policy of Armed Neutrality, dispite CivUni overall being a toxic experince for many players Wyvern was so disconnected from it all that it never really experinced it, most members of Wyvern look back on it as a fun time due to not getting involved in the toxic affairs of the rest of the server, Wyvern achieved alot and is awaiting another fresh Civ server for its members to play on. He also had his own Duchy within Wyvern called Elysia which had Greko-Roman themed builds. Seekinq also ran the Wyvern Telegraph, a weekly newspaper held in the Wyvern Discord going over stuff that happened within the Kingdom that week.

After the shutdown of CivUni Seekinq decided to take a months break from Civ and when he came back went onto CivClassics and founded the Imperial Kingdom of Fish with many Wyvern citizens as a place for them to chill over the summer months and to keep the nation together while waiting for another Civ Server, he decided to found this nation by Wyverns old neighbors of Acadia from CivUni, which had also moved to classics, he started work on Cora, Fish's capital city as its chief architect. 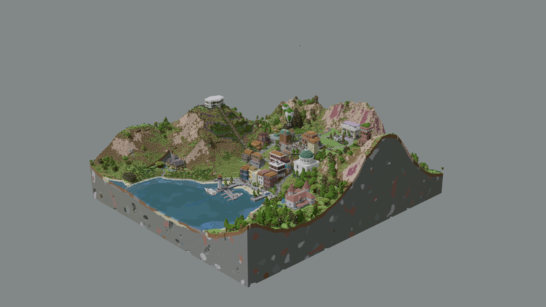 Render of Wyvern by Seekinq
Retrieved from "https://civwiki.org/w/index.php?title=Seekinq&oldid=41144"
Categories:
Cookies help us deliver our services. By using our services, you agree to our use of cookies.