From CivWiki
Jump to navigation Jump to search
Not to be confused with Empire of Eddie Murphy.

The Imperial Federation of Eddie Murphy, colloquially known just as Eddie Murphy or EM, is a federal republic in the central +,+. It is the successor to the Empire of Eddie Murphy, with whom it shares many of its members and its name.

The existence of a nation called "Eddie Murphy" dates back to December 2020, and the existence of its members on CivClassic back three months further. This first nation - the Empire of Eddie Murphy - came about as a result of a large pre-existing friend group becoming collectively interested in CivClassic, and consequently became the second most populous nation on the server at a time of severe inactivity. As CivClassic rejuvenated, however, the anarchic behemoth proved challenging to control from within and without, and was subsequently embroiled in drama. This culminated with the Collapse of Eddie Murphy in February 2021, and the subsequent collapses of successor states Anyakova in March and The Empire in April. 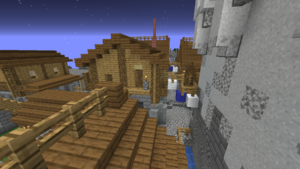 Fort Liberty as the Murphians left it

The following day, the first Murphians arrived in Cortesia Del Mar; they were housed in the historic Entranan town of Fort Liberty, where they were supplied with basic resources and invited to grind up nation-building materials. The nationless Murphians had no land and no plan at this time, and so began to recruit members and grind resources at Fort Liberty in relative secrecy.
This persisted for approximately two weeks, until the Thoria-Nro'Meagh War presented yodabird19 with an opportunity to deliver the Murphians permanent land - a scarce resource in the +,+ at this time. In the aftermath of the war, Panem - a territory which had for months sought to be annexed by a more active nation - became independent of its previous owner Thoria. yodabird19 secured an agreement with Panem's leader Thejmqn for Eddie Murphy to settle and own the land; the former portion of this agreement was put into effect on October 18, and the latter on October 23.

Retrieved from "https://civwiki.org/w/index.php?title=Imperial_Federation_of_Eddie_Murphy&oldid=49557"
Categories:
Cookies help us deliver our services. By using our services, you agree to our use of cookies.