From CivWiki
(Redirected from Corvus)
Jump to navigation Jump to search 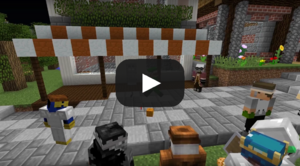 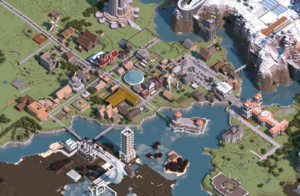 The Kingdom of Impasse was one of the major nations during early CivClassic. It was located in the -,- quadrant, neighboring Coventhia, Lusitania, SPQR, and TdC.

The building style for Old Impasse is a mix of Renaissance and Classical architecture. [2] Impasse's Miami district is based around an 80's/futuristic style.

Impasse Proper is the northern end of the HITS rail, connecting most major cities in the western hemisphere such as Lusitania, TdC, Mt. Augusta, and the Commonwealth. Direct railways connect Impasse to Frostrock, SPQR, Columbia, and 0,0.

As the governmental structure was a Constitutional Monarchy[3], the royal family was based around marriage and inheritance. [4]

The citizens of Impasse regularly voted creating a House of Commons consisting of about 1/5 of all citizens. [5]

Any town in Impasse could become a District if it had distinguishing characteristics and was the primary residence of five or more citizens. Districts could independently control their "urban configuration and architectural style of their buildings and public places". [6]

Impasse was a founding member of the Western Alliance, and later joined the United Northern Congress.

Since early on, Impasse was in close alliance with Hjaltland. One of the first combined efforts was building the HITS rail.

On 15 June 2017, YegorDia from Alpoko raided an Impassian cactus farm outpost while it was being AFK'd. When YegorDia stopped responding to negotiations and six more raiders appeared at the farm, Impasse sent four fighters there. Immediately after they arrived at the farm and assessed the damage, the raiders were already in Impasse, so the fighters rushed back to the city.

The raiders were barely geared up with about a set of unenchanted diamond armor between them, breaking a few chests and several beds in the barracks (southeast of the plaza, now location of the Eagle Bunker). After YegorDia got pearled and two more killed, the remaining raiders used speed potions and fled by boat into the swamp, being chased about 1500 blocks south before the Impassian fighters lost them.

YegorDia then hired Saren_Solaris and Malen to free him, but after the Impasse government explained the situation, they backed down.

The conflict ended with the Alpoko leadership paying large amounts of diamond and iron as reparations for the damages done to Impasse, including covering the output of the cactus farm until it was fixed.

On 09 July 2017 the Blackwater alt accounts Prot_Monster, vanz_gateng, Not_a_raider, and Doofdip tore down the two unreinforced houses of Samnrad and Seldomshock and posted a video of the raid on the subreddit under the account "TheBuildingPolice". [7] The houses were rebuilt shortly after.

More video posts follow over the next days, revealing that they are indeed alts of the Blackwater members Saren_Solaris, dookoo782, YegorDia, and bewsiej. dookoo782 and YegorDia were pearled on 15 July 2017 and vaulted by Hjaltland, while Saren_Solaris and bewsiej got off scot-free. [8]

{The Lexington affiliates Rixxlon, Symotic, Johnsama, and DirtyDiaperDude secretly built a vault hole in Impasse territory around {Coords|-4360|-4090|60}}. [9] After being discovered, they tactically griefed their own hole to prevent Impasse from using it. Impasse responded by removing their blocks and placing more tactical griefing on Impasse groups.

On 21 August 2017 the vault builders retaliated by raiding Impasse's capital city and griefing it with SRO and SRS. The cleanup involved many supporters from all over the map, notably Impasse's allies Hjaltland and the Commonwealth. Remnants of the grief are still visible half a year later.

With the Somber War entering a stalemate and school beginning, all of Impasse went inactive, many members quitting and a few only logging in occasionally to prevent reinforcement decay. 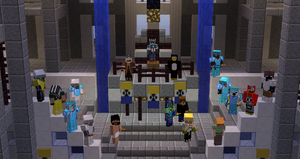 Events such as the Fall of Lexington and the 1.12 update brought old Impassiani back to CivClassic, deciding to leave the Old City behind and build a new, better city in the Plains valley north of the main island, initially named "New Impasse". Many of the city's buildings are in Art Deco style, most notably a replica of the Cincinnati Rail Station and Seldomshock's tower of CobbleDick Industries.

See also: The Fall of Corvus

On September 28, 2018, the active population decided to rename the new city to "Corvus" and turn the nation into a corporation, with Jaydrive functioning as CEO and the Board of Directors consisting of other government figures of Impasse.

To strengthen the relationships with its neighbors, Corvus joined the UNC alliance on May 1, 2019, and stayed a member until the UNC disbanded.

During the Infinity War, the vault inside Corvus was broken by the Ok Bomber coalition, and most of Corvus' remaining players were banned for duping, ending Corvus', and thus Impasse's, existence on CivClassic.

Retrieved from "https://civwiki.org/w/index.php?title=Impasse&oldid=27070#Corvus"
Categories:
Cookies help us deliver our services. By using our services, you agree to our use of cookies.