Jolington, (pronounced /dʒoliŋtən/), officially the Astonian Unitary State of Jolington (AUSJ), is a state in the (-,-). It is a successor state to Astonia, as well as the short-lived state of Arlington.

Its primary settlement is Jolington Citadel, and its founder and emperor is SinjoroJoCrafter. 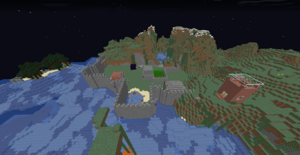 Fortified area containing a small fortification/city serving as the capital, seat of the government and containing embassies.

While administratively part of Jolington Citadel, these islands, which were Jolington's staging ground during the early stages of The Home Depot War and still contain many fortifications, separate Jolington from East Jolington.

Contains the rest of Jolington Island as well as some smaller outlying islets. Mostly undeveloped.

An island north of Jolington Island that was flattened and is being developed into the Galveston Walled City, a settlement site for newfriends.

The southern half of the Brazoria Territory that was claimed by the Third Kingdom of Astonia. It currently only has some minor outposts. It borders Icenian-occupied Richland Lakes.

Beginning of The Home Depot War

On the day Jolington was founded, a group of citizens with some association with (and supplies from) Columbia[1] and Icenia[2][3] decided to build a town/nation right on the border of Jolington's claims. In response, SinjoroJoCrafter built watchtowers and fortifications on the "Channel Islands", which were close to the border between Jolington and East Jolington. In response, the East Jolingtonians build an obsidian watchtower of their own, and filled the channel with snitches.[4]

After a tense standoff that lasted four hours, and under international pressure from their benefactors, the East Jolingtonians fled and temporarily abandoned their short-lived nation, allowing Jolington to unilaterally annex East Jolington[5]. This annexation was not widely recognized and was disputed[6].

Annexation of East Jolington and Aftermath

The resources injected into the short-lived town/nation of East Jolington by Columbia and Icenia were requisitioned by Jolington. In addition, the town of East Jolington was rennovated with new flags two days after the conflict ended, politically solidifying the annexation.

Members of the nation of Droplandia, 1drop and ColorTheory, invaded Jolington on the night of September 25th, 2021, apparently due to discourse by SinjoroJoCrafter in ! chat. They broke into Jolington's bunker and pearled him in the process, attempting to deliver him to Varkonia Vault. They instead ended up depositing his pearl in the former Ransacki Vault. Negotiations with with Hjaltland and Varkonia carried on during the night, and SinjoroJoCrafter was freed after NWO forces retrieved his pearl from the Ransacki Vault.

End of the Home Depot War

The East Jolingtonians returned and reclaimed their town on the 1st of October, After another tense standoff, the East Jolingtonians and SinjoroJoCrafter agreed to enter negotiations, ending The Home Depot War. Jolington formally recognized the independence of East Jolington and the two nations agreed to normalize relations.
Retrieved from "https://civwiki.org/w/index.php?title=Jolington&oldid=42263"
Categories:
Cookies help us deliver our services. By using our services, you agree to our use of cookies.