From CivWiki
Jump to navigation Jump to search
See also: Civcraft2Import:Towns/orion, which should be merged into this page.]]

The United Federation of Orion (UFO) was a federal republic on Civcraft 2.0 located deep in the Northwestern (-,-) quadrant. It was governed primarily by a mixture of an Executive branch led by the nation's president, and a legislative branch managed by the Executive Council. The vast majority of the nation's population resided in its expansive capital city, Orion (City). However, the UFO maintained several noteworthy colonies spread throughout the (-,-) quadrant, including Senntisten, Ñ, and Etherium.

The United Federation of Orion began very shortly after the start of Civcraft 2.0 with the establishment of its capital Orion, and frequently found itself at the top of the list in nations when it came to population, both declared and active. Its constitution was ratified by the People of Orion on Friday March 14, 2014 with a 16-5 vote in favor.

After a brief peacetime era, Orion once again became under attack by a new group, the Butter Brigade. The Butter Brigade's first attack was done in the middle of the night. The most known building in Orion, the Orion 101, was torn down by them while the Orion player base was low. What followed was a day a griefing for the town. Eventually the perpetrator was caught, and put into a minor vault, while the main one was being built.

Soon, friends of the pearled criminal were showing up in the city, and attacking innocents. While this was going on, they had someone breaking out their friend. The attacks lasted for 2 days. During this time, Orion pleaded for Minas Minas to send help to defend the city. No help was sent, besides a lone unarmed diplomat, who arrived on his own free will to help out in the situation. He was later pearled in the attacks.

Then all of a sudden the attacks stopped. There was news that the BB was heading up north to attack Minas Minas directly. Hearing this news, the remaining Orionites split up into 2 groups. One to help defend Minas Minas, and another one to break the BB's vault.

Eventually the attackers were pearled in Minas by a united effort by many assorted players. Some would even come down to Orion and help with the freeing of the innocents.

War of the Cuban Rebellion 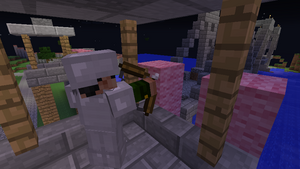 A Cuban rebel prepares a shot at an unseen civilian.

On May 1st, 2014, Farley50 announced the secession of Orion's eastern territory, using land from a territory known informally as Cuba, into a new "nation" of the same name Thus, a new horror was introduced to the land of FREEDOM™, a communist organization under the brutal dictatorship of High Commander Farley50. Seizing the land from the good and noble citizen Malice976, the Cuban rebels quickly began constructing crude cobblestone fortifications along the river embankment.

In an act of mercy, quicksilver991 offered the rebels a chance to stand down with only the loss of their homes and lives. However, when the rebels refused this generous offer, the Orion military began preparations to liberate the good people trapped under the oppressive Cuban dictatorship. Under quick and effective leadership under President Itaqi and General seldomshock, the Orion army intervened and airdropped the workbenches of capitalistic FREEDOM™ directly to the Cuban people. In an apparent rejection of Orion's generous gift to the civilians under their rule, the Cuban rebels quickly imposed martial law, locking down the territory and declaring that only through war would they be forced out.

Following this, the rebellious Principality of Loveshack also declared their intention to provide fighters to assist the rebels. Following an incident resulting in the death of three New Leningrad soldiers, there were worries that New Leningrad might intervene directly into the conflict. However, after negotiations on reparations were concluded, New Leningrad decided against full-scale conflict, providing only a handful of troops as a gesture to the communist rebels.

Thankfully, the arsenal of FREEDOM™ is vast and mighty, and when the decision was made to advance on the island, the Orion army was able to use their superior tactics and skill to secure a conclusive defeat over the rebellion. Indeed, in an ironic twist of fate, the property was returned to its rightful owner and reopening of the Camp NWA fulfillment center turned Cuba into a prosperous and productive district of Orion.

Archival footage featuring Orion news coverage at the time of the conflict.

Orion was a Democratic-Capitalist city located in the -,- on the edge of a river. The city was started on the first day of Civcraft 2.0 due to great luck in finding a good location.

The city started out as a hole in the ground that held the beds of the founding citizens in addition to mines that were used to get supplies for the city. Following these initial weeks, a period of rapid expansion occurred; the city quickly ran out of open plots and skyscrapers spawned within the first weeks of construction.

After the immediate success Orion was set back due to the group of griefers known as the Black Knights, or "BK". This spawned out of the belthazor incident where he admitted to cheating. What followed were weeks of repetitive murders and griefing that shook the town to its bones. With aid from Kappi and the Metropolis most of the griefers were caught. The rest fled to Haven.

There was a small resurgence of BK attacks soon after when the griefers attacked from Haven and pearling a large portion of the unsuspecting citizens. This was related to the reparations that were set against the griefers while unannounced in their entirety were "too high". With help from Haven, they were eventually settled.

Soon after Orion experienced its largest population expansion yet, quickly going from the few remaining citizens to well over 50.

Prior to it's establishment as the UFO colony of Senntisten, the town was considered a district of the city of Orion. However, given its unique identity and growth in size, the district was declared a separate colony to accommodate a more independent administration.

The city was a hub of trade and regularly receives merchants from all quadrants.

[Note: Not to be confused with the CivClassic city Etherium]

Retrieved from "https://civwiki.org/w/index.php?title=Orion&oldid=49584"
Categories:
Cookies help us deliver our services. By using our services, you agree to our use of cookies.