Trinacria was a former nation led by /u/Antreus that was the site of many conflicts. The nation began as a Varathian settlement, founded by a group under Antreus' leadership, but soon broke away as an independent nation. Little remains of the nation's activity prior to it's annexation, but it is known to have at one time been a member of the League of Imperiled Nations, indicating that it was considered "small" by the League's standards. 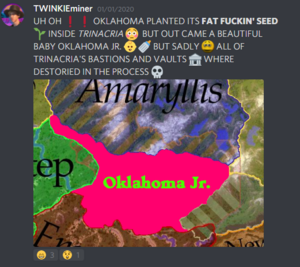 On December 31st, 2019 Trinacria was invaded by TWINKIEminer who single-handedly broke multiple bastions and bunkers over night. 24 hours after the invasion after new bastions had set, a post was made on Discord and Reddit declaring the newly formed nation of Oklahoma Jr. After the annexation of Trinacria, TWINKIEminer ceded all of Trinacria's conflicting claims to the other nations, and recognized CivCorp's sovereignty as well, giving them full rights and power to their land which would eventually become CivCorp City.

Despite a small degree of support for the Trinacrian nation, Carbon intervened, taking a firm and deliberate stance in support of CivCorp's sovereignty, as the partnership between Civcorp and Carbon was one significant to the power of both entities. Bastions of Oklahoma Jr. were switched from under TWINKIEminer to under Carbon, and later the land was partitioned between Carbon, CivCorp, and Varathia in a town hall orchestrated by Carbon in an effort to further the annexation's legitimacy.[1] An reddit account known as /u/Trincria_News claimed to represent the "government in exile"[2], but the movement has failed to gain significant international support. The heartlands of old Trinacria currently belongs to Alesia, a vassal of Carbon, and the government in exile has largely gone quiet. 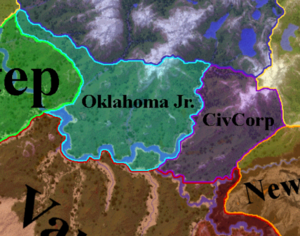 Retrieved from "https://civwiki.org/w/index.php?title=Trinacria&oldid=38034"
Categories:
Cookies help us deliver our services. By using our services, you agree to our use of cookies.