The Sack of Lambat, also known as the 2-23 Incident, is a raiding incident that occurred in Lambat City between February 23-24, 2021, during the early history of Lambat. It resulted in near-total damage of infrastructure, loss of wealth, and a declaration of martial law in the young Northeastern nation.

February 23-28: Sack of Lambat and the hunt for raiders

Two newfriends, namely Basher69 and thomasvdbunt, arrived in Lambat City in February 23 and proceeded to pillage and grief the City of Lambat, while President kaprediem (Lambat's chief source of activity, at the time) was on a visit to Mount September. At the time, Lambat was only recently reformed after a brief hiatus by kaprediem and banyough. Most of the public infrastructure were inadequately reinforced. 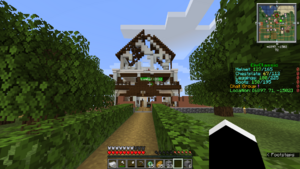 Damaged facade of the Executive Place

The damage was discovered by kaprediem upon his return to Lambat. In addition to physical losses, the material losses are tallied at around 13 diamonds, 30 iron ingots, and several books. The disaster was broadcasted by kaprediem in the Global chat as well as in Lambat and Mount September's discord servers.

Shortly following a second successful raid by against Pacem, Icenian and Septemberian officials in pursuit catches thomasvdbunt within Mount September and extradites the pearl to Icenia, whose court system was to stand in for Lambat's then-absent one for trial, upon the Lambatan government's request. Kaprediem later posted a bounty against the remaining raider.

Kaprediem brought a suit against thomasvdbunt in an Icenian court. Yodabird19 of Cortesia Del Mar provided snitch evidence via leftover snitches from Lambat's Cortesian Administration. Thomasvdbunt was found guilty and sentenced to a term of exile, with a requirement to bring his accomplice Basher69 into custody as well.[1] Basher69 remains in hot pursuit up to the present. 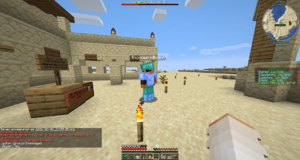 Deyan, of young OMN Medina and formerly of Kaltsburg, reported the placement of threatening signs in his town, demanding 24 diamonds by the end of the day. The signs claim to have been placed by Lambat, and states a threat that Medina will be razed. As soon as kaprediem is available to dispel rumors that Lambat was behind the threats, international eyes turned to the raider group as the culprits of the false flag operation.
Later in the day, thomasvdbunt is sighted at Medina in partial prot at the threatening signs. He is never seen at Medina again, and Medina is securely bastioned and snitched two days later.

The incident served as a catalyst for renewed activity in Lambat. Damaged buildings were rebuilt or demolished altogether, while an extensive mining rush fueled the nation's economy. It brought the isolationist nation to the attention of the international community.

Retrieved from "https://civwiki.org/w/index.php?title=Sack_of_Lambat&oldid=45123"
Category:
Cookies help us deliver our services. By using our services, you agree to our use of cookies.