From CivWiki
Jump to navigation Jump to search
Greater Duskwood is a Lambatan Special Administrative Region formed in August 2021. It consists of the islands of Isla Occidental and Tarragona. Greater Duskwood is the result of the merger of the Socialist Commune of Islands into the Republic of Lambat. 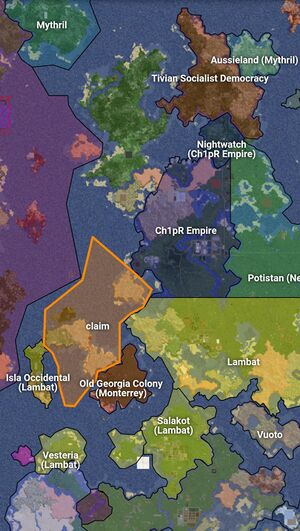 Claims of the Socialist Commune of Islands upon founding marked in orange.

The Socialist Commune of Islands was a short-lived nation state, founded by 4pocalypse4risen on the 7th of August, 2021. It compremised most of the territories of the current Greater Duskwood SAR, with the exception of Isle Terragona. The SCI was a short-lived state, only living for nine days, making it one of the shortest-lived nations on civ. During the nine days it was operational, the SCI allied itself with the newfriend nation of Mauritanië, and sold off the island of Shrek's swamp to Capeland for the price of 15 diamonds, which still haven't been paid. the SCI did however keep a small foothold on the island.

reasonably shortly after the founding of the SCI, 4pocalypse4risen realised she could most likely not rule an entire nation while having it be succesful. She therefore started unity talks with Lambat pretty quickly, and a deal was reached in a few days. The SCI would be abolished, and its territory would be incorperated in the Special Administrative Region of Greater Duskwood, which would include the SCI's land and Isla Occidental, which would be given to it. 4pocalypse4risen would stay as its governor.

Tarragona was the capital of the SCI, and would continue serving its role as the capital of greater duskwood. It, however, was heavily underbuilt and abandoned after being founded in 2017, with several heavily decayed reinforcements protecting a few remaining buildings. One of these houses was proclaimed the governors' palace, where the governor would stay. During this time, two more people joined Greater Duskwood, under which appleRadiation, who started plans to build various structures in Tarragona. The first building finished by her was a small observatory on the edge of Rooftop. Shortly after, she started work on the Houses of Assembly of Greater Duskwood, which will serve as the political heart of Greater Duskwood. The train station was also finished, which was hooked up to the KANI rail system to make Tarragona easier to reach.

Greater Duskwood is a Special Administrative Region of Lambat, and therefore the leading figure's position is the Governor. As of 17 november, 2021, the current leading Governor is 4pocalypse4risen.
Retrieved from "https://civwiki.org/w/index.php?title=Greater_Duskwood&oldid=43163"
Categories:
Cookies help us deliver our services. By using our services, you agree to our use of cookies.