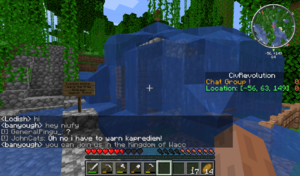 Old Narra after it was raided by the Wagner Group.
Not to be confused with the CivMC nation Nara.

The Principality of Narra was a nation in CivRev that was founded by Kaprediem (HijoDeFootspa) on November 17th, 2021. It existed in the -,+.[1][2] Narra was an absolute monarchy ruled by a Prince, Kaprediem. It had close relations with Wacc due to their common heritage in the CivClassic server.

Narra was established immediately by Kaprediem after spawning in a jungle biome. During the first few hours, he announced his "beef" with Hermitistan, later renamed Wacc. This ended hours later due to lack of any real action.

In no less than 16 hours the unnamed original settlement was raided twice, first by an unknown assailant, second by an agent from the so-called Wagner Group. The Prince was forcibly evicted from the settlement. Immediately, Kaprediem asked Metrixmor for a potential location to resettle. Narra was relocated west of Wacc. The new site was more abundant in resources, enabling Narra to progress beyond its impoverished state.

On the 18th of November, Narra practically ceased to function as a country after the CivClassics outage resolved. When Classics closed its doors early the next month, Kaprediem returned to the server and decided to relocate and rename his state to Lambat.

Retrieved from "https://civwiki.org/w/index.php?title=Narra&oldid=49678"
Categories:
Cookies help us deliver our services. By using our services, you agree to our use of cookies.