The Grand Imperium was a nation located in the eastern regions of the -,- quadrant, between Bloom in the south, Corvus in the west, and Tel Aviv (formerly Lexington) in the north-east. The Grand Imperium occupies a desolate snowy plateau surrounded by steep sea-cliffs. The last founder and current leader of the nation is Emperor Attoprak and its capital was Capitum. Other notable settlements include Altton, Amsterdam, Asturious and Frostrock.

The Grand Imperium was an absolute monarchy, led by Emperor Attoprak since the nation’s inception in November 2019. The Emperor was the supreme authority of the Grand Imperium: the ultimate policy-maker, ultimate judge, ultimate military leader, and general figurehead of the nation.

Beneath the positions mentioned above were seven the Ministers of the Imperium: the Ministers for Production, Economy, Construction, Culture and Tourism, Recruitment, Diplomacy, and Defence. The Honor Council was the official council of the Ministers.

The power of the Emperor was enshrined within the Constitution of the Grand Imperium, an all-encompassing document providing rules on citizenship, civil duties, laws, trials, construction and levies. The Constitution prized concision, simplicity and order, and left the Emperor with the power of final interpretation.

Capitum was the main province of the Grand Imperium. Capitum territory was divided into two peninsulae: the southern peninsula, pierced with an inland sea, was center of capital in the early days of the Empire, whereas the northern peninsula was occupied by Altton and Asturious.

Capital Capitum was the Capital of the Grand Imperium, located in Capitum Province. Capital Capitum planned to be built to southern peninsula of the Capitum Province in early days, however, Emperor Attoprak decided that both of peninsulae should be reserved for and named as Capitum. Capitum's name is mixture of the Chamberlain WorldSculptor's city in Allimore, Sanctum, and Emperor Attoprak's Empire's capital in Allimore, Capitis.

Tutela was a gift given by Bloom, Corvus and Coventhia to the Grand Imperium and Emperor Attoprak. Tutela has three different biomes with one island. Tutela Island was claimed by Coventhia and Corvus but then these two nations who aren't get on well together decided to gift their their claim in the island. Mainland of the Tutela was given by the Bloom. Tutela island was one of the biggest examples of the Grand Imperium's peerless international relations. This province shows that all of nations have the ability to get on well with each other, no matter what's their 'side', ideology and how's their international relations. Tutela didn't have a seat or lord to show that each nation can stay and improve itself with being unbaised.

Altton was one of the oldest settlements in the Grand Imperium, founded by the former Minister of Production Jerven. Jerven was war weary who escaped from the Hallow-SQPR war to live in the Grand Imperium with his old friends, Emperor Attoprak and Chamberlain WorldSculptor. With his skills and hardworking, he became first Minister and Mayor of the Grand Imperium. Jerven moved to Grand Imperium in CivRealms and Altton citizens became inactive after his move. Altton was turned into a historical site after it had been abandoned.

Coventhia was a province of the Grand Imperium from June to December of 2020.[1][2]

The Grand Imperium occupied a very large area of land on the map, a desolate island plateau of snowy highlands and forbidding sea-cliffs located in the eastern -,- quadrant. The Grand Imperium’s core territory was divided into two peninsulae: the southern peninsula, pierced with an inland sea, was home to Capitum, whereas the northern peninsula was occupied by Altton. 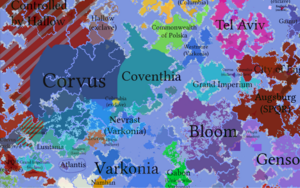 The Grand Imperium's claims as of March 2020. The mushroom island marked as Corvus/Coventhia (Exclave) was also transferred to the Imperium. The Grand Imperium had a successful history. Established in November 2019, the Grand Imperium went through a long period of planning and recruitment before joining CivClassic in late November 2019. The first construction project, excavation of the station hall, took just a few days, and preparation began for building.

Emperor Attoprak’s leadership was soon tested by the separatist NADA Terrorist Organisation led by Nadvach, who, when confronted about a griefing incident, attacked their Emperor and were pearled and exiled as a result. The griefer’s base has been preserved as a museum.

Shortly afterwards, the nations of the -,- region and beyond suffered a huge attack, with the cities of Rome and Frostrock badly griefed and several innocent players pearled. The conflict became known as the War of The Coalition. The Grand Imperium, still in its infancy, kept a low profile during the attacks and did not formally join the OK Bomber Coalition to oppose the griefers. After the power of the griefers was broken during the Battle of Lusitania, Emperor Attoprak offered assistance to several affected nations, accepting our first Bastions from Slusshi, President of Bloom as nations across the server stepped up security efforts in the aftermath.

January 2020 saw an explosion of aboveground construction and city planning. Emperor Attoprak also made a number of informal visits to other nations on the server, including Bloom, Coventhia, Tel Aviv, Mt. Augusta, Yoahtl, and the Commonwealth. Ambitious construction projects continue, with new buildings added daily.

At the end of January, several new builds were completed, including the Factory, Post Office, Imperial Shrine, and Prestige Apartments in rapid succession. On February 1st, Emperor Attoprak announced the claiming of a small section of land to the west of the cities of Varkonia and Atlantis - due to the barren nature of the Grand Imperium homeland, farming land was urgently needed. On February 5th, construction started on the Ministry of Production, the first of the seven Ministry buildings. 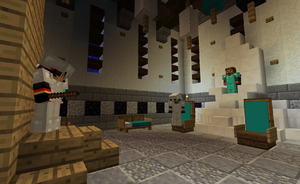 With the establishment of the Imperium House, the settlement of Amsterdam truly became integrated into the Grand Imperium.

During February, the Grand Imperium's land claims expanded to include a small area of land east of the original mesa, around the Medi Sea, which came to be known as Isi Province, the Grand Imperium's third Province. These lands, currently unclaimed, were originally the property of the defunct nation of Highrock. The new claim included the abandoned and lightly griefed town of Amsterdam, which the Grand Imperium restored, adding an Imperial Shrine, inn, embassy, library, post office, station and housing for workers. Original builds were kept as a museum, with some information about daily life in Highrock.

In March, established nations bestowed the Imperium with more land: on the 9th, the Republic of Bloom granted more land to the Grand Imperium to aid infrastructure development, and on the 29th Coventhia transferred ownership of a mushroom island exclave. In keeping with the Grand Imperium's mission of preserving history, existing buildings were preserved as monuments to peace and friendship in the -,-. These were integrated into the Grand Imperium as Tutela Province.

In April, the Grand Imperium held its first formal trial, wherein FireStone222 accused jbbroylesma of theft. Emperor Attoprak delivered a verdict of 'not guilty' based on inadequate evidence, whereupon FireStone222 pearled jbbroylesma in the courtroom itself and then fled, only to return fully armed and pearl two more Grand Imperium citizens. The nation was saved when Slushhi, President of Bloom, killed the attacker, who was subsequently sentenced to imprisonment for the crimes of Treason, Murder, and Fraud.

In June 2020, Coventhia established[2] that their land should be listed as a Grand Imperium Protectorate and the Grand Imperium took over Coventhia's claims to protect and develop. In December 2020 Coventhia reclaimed their old territory.[1] 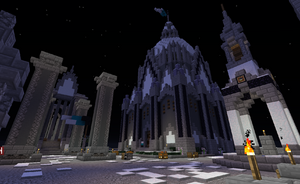 The flag of the Grand Imperium is a black, cyan and white tricolour representing the three domains of the world: the black of the deep earth, the blue-green of sea and meadow, and the white sky of their snowy homeland. It also represents the three classes of our Empire: its citizens, government and Emperor.

Grand Imperium architecture is austere, elegant and distinctive. Its tall grey buildings make use of many columns, spires, domes and pointed pediments.

The preservation of lore and history is extremely important to the Grand Imperium, with events carefully recorded ingame and on its national Subreddit, Wiki, Minehut server, and Discord channel. Players can also stay up to date with current events by using the Official Gazette on Discord, a frequently-updated account of Grand Imperium affairs for new or less-active players. The Grand Imperium also collects books and relics from other nations, and Grand Imperium citizens often do some writing of their own.

Grand Imperium citizens were patriotic, with Imperial Cult buildings adorned with the national flag and the statue of the Emperor commonplace in Imperium territories. Provincial settlements generally also have an Imperium House, which serves as an embassy and official residence for the Emperor on His visits. Stelae bearing the Emperor's quotations can also be found in every corner of the nation.

Retrieved from "https://civwiki.org/w/index.php?title=Grand_Imperium&oldid=49471"
Categories:
Cookies help us deliver our services. By using our services, you agree to our use of cookies.