From CivWiki
Jump to navigation Jump to search
The Siege of Columbia was a prolonged series of battles, skirmishes, and bombings occurring during the Infinity War that primary happened within Columbia, Polska, and the former Chanseatic State. The Siege of Columbia was one of the longest ongoing campaigns and marked a major milestone during the Infinity War; the end result was a pyrrhic victory for World Police forces resulting in a permanent end to any offensive operations by the NATO alliance.

Prior to the beginning of the Siege of Columbia, a number of key events occurred that "set the stage" for the oncoming battle. These events proved critical in deciding the outcome of the siege.

During the Columbian Bush War, Rhodesian in exile Kdeeks utilized his position in Columbia's Government to steal the bulk of the Columbian citadel groups excluding the groups belonging to the Valyrian Province. As a result shadedoom, leader of the Oomist Faction lost access to all of the defensive infrastructure, snitches, bastions, farms, vault groups, and city groups. Additionally, this forced the rapid development of the Crucible Vault located north of Valyria City. After the defeat of the Rhodesian sect, Mirian forces found and disabled a NATO skybunker located in the ocean north of Polska.

During the Infinity War, this loss of Columbian infrastructure proved to be exceptionally disadvantages to World Police forces as they no longer had access to the entirety of mainland Columbia and as such, were unable to make serious inroads into the region until the end of the war.

Induction of Geographica Fighters Into NATO

A small contingent of PVPers from the Geographica HCF server joined joined Cascadia at the behest of Kaloa_HG. After a series of disputes this small group left Cascadia and began fighting NATO on behalf of Varkonia and Mir, primarily at the Pinkerton Vault in the Holy Jaded Empire. After a short time, several of the Geographica players were pearled by NATO. To secure their freedom they switched sides and began fighting on behalf of NATO; additionally, several Geographica players including Bob_The_B1lder began a recruitment campaign aimed at pulling in more Geographica fighters. Due to the mishandling of the Geographica fighters by various World Police aligned nations, NATO was able to secure a large number of fresh soldiers.

Columbia's geographical location coupled with it's access to a sizeable vault made it one of the most relevant World Police strategic assets during war. From the Crucible vault, the World Police were able to stage and launch attacks into the heart of NATO territory. Due to this fact and Columbia's previous relationship with NATO, the Crucible Vault and by extension Columbia were prime targets for NATO's largest offensive campaign. 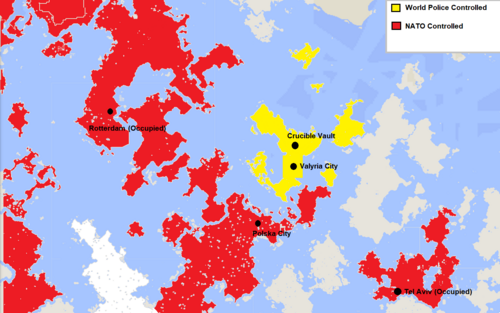 Battle of the Crucible

Following the fall of the Corvus, NATO began preparing a counter invasion of Columbia with the primary target being the Crucible vault. In the first battle of the Crucible, a NATO spy, hollybell91 with the help of other NATO fighters (most notably former Lexington fighter MCisFTW) sabotaged the Crucible during the early morning hours of February 17th, 2020. The NATO saboteur team dumped large quantities of IRO and DRO into the Crucible Vault rings, groundbunker, and skybunker. Additionally, they reinforced a number of doors onto NATO groups and drained the majority of the stored potions within the vault. Several hours later, they mounted a large but uncoordinated bedrock level assault on the vault which was repelled by World Police forces. One prominent NATO fighter was pearled (Bob_The_B1lder) however the Crucible vault was significantly damaged and drained of supplies.

NATO began scouting the outskirts of Valyria. In response, a number of World Police scouting parties were deployed into Polska to determine the location of any NATO bunkers and disable them. During one such scouting party led by World Police Officer S4NTA, a moderately large group of NATO fighters led by Hallow leader HanTzu was encountered. A skirmish broke out resulting in the World Police forces retreating to Valyria City and one NATO fighter being killed (but not pearled). Similar skirmishes continued for a few weeks leading to minor damage being done to Valyria City and Polska City.

Fight for the Valyria City Bunker and Rail Station

After NATO's initial assault on the Crucible was repelled, a series of prolonged attacks on Valyria City began. NATO established a system of tunnels throughout the Polska and Valyrian under cities and used these to springboard attacks on the Valyrian City bunker located underneath the rail station. Due to the proximity of NATO forces, Columbian forces evacuated the Valyrian City bunker. After a week of tunnel warfare, fighting stagnated and neither side was able to make significant progress. 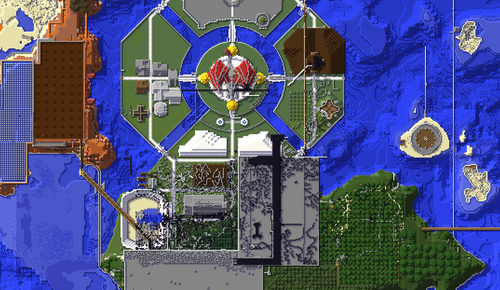 Following the stalemate in the tunnels and the defeat at the Crucible, NATO began to utilize mass citadel bombing (obsidian bombing) to raze Valyria City. For over two weeks, NATO forces deployed teams of exile pearled fighters to grief the city. These exile pearled players proved nearly impossible for World Police forces to stop as killing them simply resulted in them re-spawning back at their bed allowing them to continue griefing several minutes later. World Police forces attempted to prevent this attack by deploying city bastions however NATO easily countered this by constructing a large skyplatform over the city from which they could break the bastions from relative safety. This campaign resulted in one of the most devastating obsidian bombings of a city. 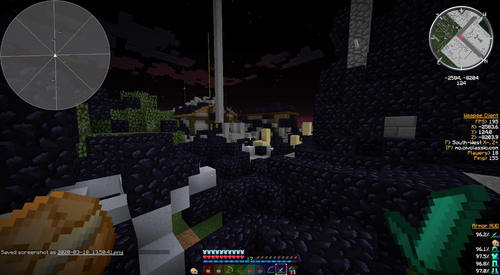 Destruction of Chanseatic Farms and Second Battle of the Crucible

During the fighting for Valyria City, World Police Officer Kaloa_HG discovered a large farm and bunker complex within the Chanseatic State to the north east of the Crucible. After an investigation, it was determined that these farms were owned and operated by known Hallow associates OJDZ and Foogoot. A World Police attack team was deployed to disable the farms while a second team was on put on vault defense duty. Once World Police soldiers began hitting snitches at the Chanseatic State farms, NATO deployed a counterattack on the Crucible Vault in attempt to disable it while many of it's defenders were out pillaging the farms. This plan failed as the team the World Police left behind was able to withstand the NATO assault and buy the farm team time to finish their task.

During a World Police counterattack into Polska City, Polskan leader Robokaiser was knocked off a cliff into an ocean full of World Policeman and was pearled. This marked a significant victory for the World Police as Robokaiser was one of the chief grinders and leaders of NATO. Robokaiser's pearl was evacuated from the Crucible Vault in the early morning hours via sky road to Mir's Vault to ensure that even if the Crucible were to fall, Robokaiser would remain pearled.

To break the stalemate, the World Police skybridged from the Crucible Vault over Polska City and by doing so, were able to completely break all of the city bastions from safety. Once the bulk of Polska's city bastions were destroyed, the World Police used NATO's own tactic against them and sent exile pearled World Police fighters into the city to disable NATO's numerous traps and other defensive infrastructure. Due to the Polska skybunker already being disabled, NATO was unable to counterattack and began to withdraw from the region. World Police forces cemented their hold on Polska and Valyria by constructing fortifications in Polska City and in the ocean between Polska and Columbia. This marked the end of the Siege of Columbia.

End of the Columbian Theater

Following the World Police's victory in Polska and Valyria, a period of stagnation occurred where little fighting happened. During this time, World Police forces created a series of bunkers and ice roads from which they launched a devastating attack on Hallow Vault leading to the collapse of NATO and the eventual conclusion of the Infinity War.

Retrieved from "https://civwiki.org/w/index.php?title=Siege_of_Columbia&oldid=39735"
Cookies help us deliver our services. By using our services, you agree to our use of cookies.