Mechanics that protect structures and items.

Spend resources to reinforce blocks to private groups; players not on the group must to break the block multiple times in order to destroy it.

Reinforcing a gold block creates an acid block. An acid block can remove the reinforced block directly above it regardless of respective reinforcement groups. The acid block must be allowed to mature and must use the same reinforcement type as the block directly above it. When enough time has passed such that the acid block is mature, looking at the acid block and doing /ctacid will remove the blocks. The block on the top will be removed an the gold block will be dropped on the ground. /ctacid has a range of 40 blocks. It can remove several blocks at the same as long as they line up with the player's cursor. Acid blocks can be used in traps.

A reinforcement can be set to insecure using /ctin or /ctinsecure and hitting it. This allows hoppers to move items out.

Reinforcements placed under a group will decay if the group becomes inactive (no player in the groups logs in).

Since a single player logging in is enough to reinitialize the decay clock and since the decay rate is rather slow, decayed buildings aren't common.

A common abbreviation series is DRO/IRO/SRO/PRO, standing for for Diamond/Iron/Stone/Paper reinforced obsidian.

An online calculator can be found at: https://okx.sh/break/

A Citadel reinforcement group manager. Allows the creation of groups in Minecraft. From buildings to chat messages, one can selectivity restrict or expand which players have access.

The extensive Namelayer commands can be entirely avoided: 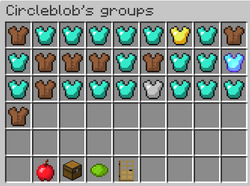 The GUI opened by typing '/nl'.

The first screen of the Namelayer GUI shows rows of chestplates each corresponding to a Namelayer group, each chestplate type corresponding to a permission level (Leather = Member, Gold = Mod, Iron = Admin, Diamond = Owner. The enchanted chestplate shows the default group which is the group reinforcements will be on after typing only /ctf). For example the admin owner permission level gives the ability to delete the group while the member does not by default.

Even though an account can be Owner of any number of NameLayer groups, an account can only be Primary Owner of up to 15 groups; after that, group creations and Primary Owner transfers to that account are denied, until groups are either transferred to another account or deleted. One can get around this limit by owning multiple accounts and adding the actively used accounts as Owner (instead of Primary Owner, which is one of the alt accounts).

Usernames are permanent. Once an account has logged in, it won't be possible to change the username. Changing the username using the official Minecraft website will not change it on CivClassic.

Should a player log in with an already used username, its displayed name will have "1" added at the end.

Prevent actions such as block placements inside claims, unless bastion is broken.

CivClassic[3] uses Bastion in tandem with Citadel and Namelayer. It adds two types of blocks to the game: city bastions (lored bone block) and vault bastions (lored sponge). They are an advanced defensive block, preventing foes from taking action in the space surrounding it. The fields they project cover a square area from the y-level where the bastion block is located up to y256 (sky limit). Vault bastions are typically used in defensive infrastructure (most notably, vaults) to prevent block placement and ender pearl throwing. They allow or disallow players based in membership on the group the bastion is Citadel-reinforced with, and can be broken by hostile players from any block under their coverage. Essentially, doing any "forbidden" activity inside of a bastion field will cause damage, and over a period of time (scaling with the number of people attacking) the bastion will break, deleting the block and removing its field from existence. The health of the bastion block depends on the Citadel reinforcement, but due to the high cost of the block there is little sense in using anything but diamond. A bastion cap refers to the blocks, normally 1 layer of DRO (Diamond-reinforced obsidian), placed around the bastion block itself to protect it. Without a cap, it may be more efficient for attackers to mine the bastion block itself than to break it via block placements.

Bastions are created with FactoryMod using a bastion factory. To build one, it costs 32 of each of the 6 lored bastion components, each coming from a separate factory: 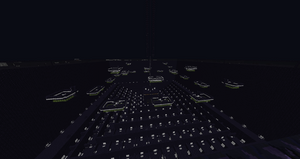 Hjaltland's Vault as it stood in September 2017. 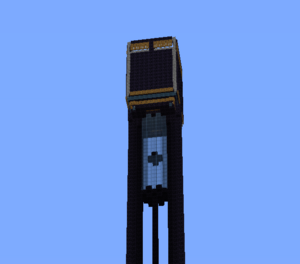 Record the actions of other players in an area using snitches {source, config} 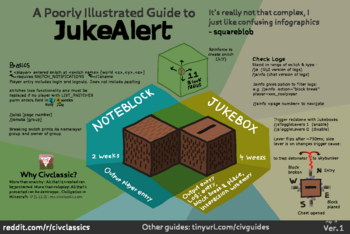 Snitches are triggered when a player enters the 11 block square shaped radius around the snitch block. Players with namelayer permission SNITCH_NOTIFICATIONS on the group the snitch is reinforced to receive a chat message in the format * <player> entered snitch at <snitch name> [world <x>,<y>,<z>]. To create a snitch place a reinforced noteblock or jukebox. The snitch name can be set using the /janame <name> command. Both noteblocks and jukebox snitches output chat messages on player entry yet jukebox snitches have the additional functionality of logging the entry in addition to block placement, block breaks and interactions with entities (Such as opening chests, killing mobs and mounting horses)

Jukebox logs can be checked by players who have the permission READ_SNITCHLOG. Standing within snitch range (11 block raduis) and typing /jainfo prints logs in chat while /ja opens a GUI containing logs. Both commands display the same information. /jainfo can take additional parameters in the syntax /jainfo [<page number> or 'next'] [censor] [action=<action type>] [player=<username>]. These parameters can be combined in any order.

Retrieved from "https://civwiki.org/w/index.php?title=Comprehensive_Guide:Protection&oldid=41671#Citadel"
Categories:
Cookies help us deliver our services. By using our services, you agree to our use of cookies.