The Battle of The Crucible

The Battle of the Crucible was a vault attack carried out by NATO against Columbia's vault, The Crucible, as part of the Infinity War. The battle took place at the Crucible Vault in Valyria, Columbia on February 17th, 2020. The battle ultimately resulted in a victory for various World Police forces, and a loss for NATO and its allies.

In the early morning hours of Monday, February 17th, 2020, Columbian citizens awoke to find that their vault, The Crucible, had been griefed and that many of the supply chests in the vault, containing mostly building materials and potions, had been destroyed. It was quickly determined by YourAverageRick, a citizen of Columbia who first noticed the situation upon logging in to the vault, that the grief in the vault had to have been part of an inside job. Evidence began to accumulate very rapidly in support of this theory, and pointed to the long-time, on-and-off-again Valyrian citizen hollybell91 as the culprit. She had mistakenly been given moderator permissions to the doors and bastions group, enabling her to place blocks and /ctr certain aspects of the vault under the guidance of NATO. World Police forces were immediately alerted of the situation, and a team of six Entente and UDF personnel was dispatched to assess the damage and reestablish control over the vault. The block grief placed by hollybell91 was made up of significant amounts of IRO and DRO, and filled most of the ground and sky bunkers, as well as obstructed large sections of the rings. Many of the doors on the vault, particularly in the outer rings, had also been /ctr'd over to NATO-owned groups, making movement around the vault very difficult. Upon their arrival at the scene, the World Police forces set about securing the vault and bringing it to a state where it could be defended. They then prioritized freeing allied accounts that had previously logged out inside the newly block griefed sections of the vault.

Gregy165, commenting on the attack.

Approximately two hours after World Police forces arrived, a contingent of over a dozen NATO combatants was spotted underground a few hundred blocks North of the Crucible Vault. After being spotted, the NATO force immediately charged into the vault hole through a small tunnel at bedrock on the Northwest side, and began the outermost vault bastions. The defenders, at this point numbering around eight, set to the vault's sky defences and began shooting the attackers to hinder their progress, while certified International Officer of the Law jayms harassed them outside the rings to buy time. 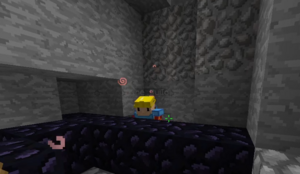 Bob_the_BuiIder, trapped behind World Police lines seconds before his pearling.

Mir Team 6 soon arrived in Valyria City, evening out the numerical disparity between the two forces. Soon thereafter, NATO fighters attempted a second push into the vault hole, but were quickly repulsed by the reorganized and more numerous defending force. World Police fighters soon teleported to the surface North of the vault hole to break several unmatured city bastions NATO had placed along their attack tunnel at bedrock, before entering it themselves. NATO forces responded to this incursion, meeting the defenders partway down the tunnel, where fighting broke out.

Following a couple close calls in which NATO fighters nearly got blocked in behind World Police grief, they pulled back from the frontline slightly. BennyZ, while walking up to the block grief at the frontline to observe NATO forces, noticed Bob_the_BuiIder crouching in a corner in the World Police side of the tunnel, separated from his compatriots and trapped behind opposing lines. Several World Police fighters immediately descended upon the defenseless construction worker, while others simultaneously prevented his escape and rescue by NATO by placing additional block grief.

After 58 seconds of fighting, Bob_the_BuiIder was pearled and taken back to The Crucible, with both sides disengaging and returning to their primary positions.

Having lost one fighter, the NATO forces decided to retreat from the area. The World Police, having successfully defended the vault, were now left to repair the vault over the course of the following weeks. NATO however would later come back, this time for a prolonged siege of the Crucible and whole of Valyria. During the next two months, NATO forces would continuously harass the vault and city, being repulsed by World Police forces each time, until eventually losing momentum and giving up, retreating to their world border vault in Hallow. The Battle of the Crucible and Siege of Valyria proved to be one of the main decisive turning points in the war.

Retrieved from "https://civwiki.org/w/index.php?title=The_Battle_of_The_Crucible&oldid=21058"
Category:
Cookies help us deliver our services. By using our services, you agree to our use of cookies.