Emperor Attoprak was initially a common citizen of the city of Volair in the Republic of Atlas, on the Allimore server, where he worked as CEO of Axis Industries. Attoprak later left Atlas to pursue his own ambitions, becoming Emperor of the Great Eksen Empire and establishing a capital, Capitis, to the far south.

After a map change, activity on Allimore dropped, and Attoprak decided to establish a new empire on CivClassic. After several weeks of preparation, recruitment and communication with citizens of Bloom, Coventhia, Varkonia and Mount Augusta, the advance guard of the Imperium joined CivClassic in late November 2019, converging on the pre-agreed territory of Guney Province and establishing the beginnings of the Imperium.

In mid-December, Attoprak's rule was challenged by Navdach, leader of the separatist faction known in the Imperium as the NADA Terrorist Organisation. After Navdach was caught griefing Coventhian builds, Attoprak confronted Navdach, who attacked and forced the loyalists to regroup. Attoprak personally spearheaded the counterattack, pursuing the rebels to their base and pearling two traitors in the ensuing combat. The rebel base has been preserved as a museum.

A great period of peace and prosperity followed in early 2020, as citizens raised great buildings and delved deep into the rich lore of the server. Hundreds of books were procured from the great libraries of the world, and the Grand Imperium joined The Rockwell Institute and Council of the Medi Sea. Attoprak personally oversaw the expansion of the Imperium on all fronts, claiming Isi Province from inactive nations and negotiating the donation of Tutela Province from Bloom and Corvus. 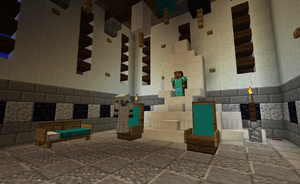 Emperor Attoprak enthroned in the Imperium House of New Amsterdam. 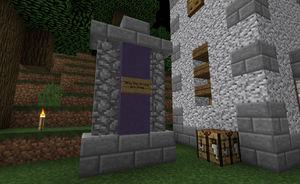 An example of an Imperial Stela.

The Imperial Cult of the Grand Imperium recognises Attoprak as the avatar of the divine state, with statues and Shrines to the Emperor and the Imperium found across Grand Imperium territories. Each Shrine includes a row of pews where citizens can meet and a raised dias and lectern where citizens can deliver paeans. Stelae, including quotations from the Emperor, are also found in most settlements. The Grand Imperium also practices reverential capitalisation of the Emperor's pronouns, at least in formal communication. The upper white bar of the Imperium's flag represents the sky and the pure authority of the Emperor.

Retrieved from "https://civwiki.org/w/index.php?title=Attoprak&oldid=38905"
Categories:
Cookies help us deliver our services. By using our services, you agree to our use of cookies.