The First Siege of Sempiternal was a battle in the NATO-Mir war, fought by players from Columbia, Hallow, Rhodesia, the Holy Jaded Empire, and Valyria, against Mir. It took place on the 17th of February, 2019, between the hours of 4am and 1pm EST at Columbia's vault, which is named "Sempiternal," and has four rings total.

The siege is considered by NATO to be one of the first significant attempts at an assault by the Mirian forces, as previous engagements have been fought over lesser bunkers.

Two players were pearled during the siege: Doommad, the leader of Valyria, and Godclick, a VPN alt later discovered to be the banned player Capri. Small skirmishes broke out at the bottom of the vault hole and in the ocean around it, however, the majority of the fighting occurred between the Sempiternal Sky Bunker and the Mirian sky bridge at height limit.

Defense of the Vault

At 6:34am EST shadedoom (Columbia) pinged everyone in the NATO discord, alerting the alliance that Mir had skybridged partway into the vault. The sky bridge had breached three rings, and had reached a distance of eight blocks from the sky bunker. It is estimated that Mir had successfully broken roughly ten bastions before shadedoom noticed and alerted the alliance. This relative success early on is due to the fact that, at the time of the attack, the Northern portion of Sempiternal's snitch curtain was incomplete, allowing Mir Team 6 to sneak by undetected from that direction.

A major aspect of the defense of Sempiternal was that, at the time, it was largely a work in progress, and lacked many features planned for later implementation. Additionally, the vault was not fully stocked with all of the potion materials and such needed for its defense, and this issue was further exacerbated by the poor initial reaction of shadedoom to destroy some materials in the sky bunker, not seeing the initial defensive response he had hoped for upon alerting NATO.

To mount a defense, the immediate first respondents to the attack were shadedoom, followed by _SteveBuscemi (alt of GeneralThomas4 [leader, Rhodesia]), Camokool (Hallow), and BrunoTheMiner (Hallow), who all arrived to defend the vault within 15 minutes of the alert.

The following hour consisted of light skirmishing and baiting around the vault at bedrock by Mir. Their forces removed pressure plates and quick access to the vault on the ground level, forcing arriving defenders to pearl into the vault's rings while being chased about the hole. Mir also attempted to block up an ice road at the Northwestern corner of the vault hole from which many of the defenders had been arriving, however, they soon abandoned this exercise in favor of consolidating their efforts on advancing the sky bridge. Shorty after doing so, NATO reinforcements arrived, most notably Doommad (leader, Valyria), and HanTzu (leader, Hallow).

During the sky bridge's push into the remaining eight blocks of bastion field coverage outside the sky bunker, _SteveBuscemi suggested using debuff potions in dispensers to deter the sky bridge and force the bastion breakers to back off. By using a combination of poison and harming potions in the debuff cannons, as well as constant archer fire at the face of the sky bridge, NATO forces were able to significantly slow down and halt bastion breaking efforts, and harass Mir Team 6, greatly prolonging their effort to advance.

At some point during the siege, a player named Godclick left the sky bunker to attempt PvP outside of the vault. He fought against Ez2Clutch in the surrounding ocean, and was outmatched, having to kite back to Sempiternal. When attempting to pearl back to the vault, his pearl landed against the wall on the side of the hole, and he died from fall damage, thus getting pearled by Ez2Clutch who had combat tagged him. A while after the siege was over, the admin Maxopoly discovered that the unknown fighter had been a VPN alt, furthering NATO's confusion about who he was. 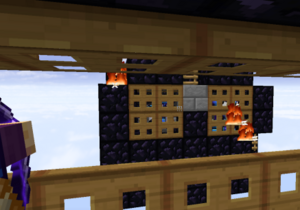 Some time later, a team of Hallow fighters advanced against the skybridge towards the Mirian attack bunker to the North, attempting to disable it and end the siege. As the operation was under way, Doommad, who was attempting to arc arrows from the trapdoor at the top of the sky bunker, had stuck himself a little too far out, and was shot off the top and pearled as a result of fall damage and being combat tagged. When Mir escorted his pearl back to their attack bunker, the operation from Hallow was discovered, and Ahrimanne (Hallow, Mount Augusta) was almost pearled, but managed to evade death under the direction of HanTzu.

Mir soon returned to the front of the sky bridge, where they were met with a secondary barrage from the debuff cannons. The sky bridge managed to get within four blocks of the Sempiternal Sky Bunker before the advance became too difficult for Mir Team 6, under constant fire from archers and debuff cannons, and now in range of NATO defenders breaking blocks on the front of the bridge. They broke it off, abandoning their attack positions and kiting the pearled defenders back to the Mir Vault.

NATO defenders were quick to seize the opportunity by breaking deep into the Mirian sky bridge and attack bunker, greatly disabling and destroying both. Around the ninth hour of the attack, Mir completely withdrew to other bunkers and to Mir Proper, ending the siege.

Retrieved from "https://civwiki.org/w/index.php?title=First_Siege_of_Sempiternal&oldid=38103"
Categories:
Cookies help us deliver our services. By using our services, you agree to our use of cookies.