The Kingdom of Kaltsburg-Leuven is a Kingdom with land on 3 main locations in -,-. This is the third Kaltsburgisch country to exist (preceded by the First Principality and the Kingdom). The Nation was created on the 16th of February by the merging of the Principality of Kaltsburg and the Duchy of Leuven, both of which were lead by Deyan.

The First Principality of

Kaltsburg was established on the 18th of August, 2018 by deyan. Later joined by nokiababy the two spent a couple of days establishing the country's borders by placing flags, signs and building essential structures in the peninsula. A few days after they were joined by HobbelJesse and TeqhZem. The few spent 3 days removing the Mt. Hafen in the southern part of the peninsula to create space for a port town (Hafenstadt). After establishing contact with the Roman Emperor, Kaltsburg was officially protected militarily by them by treaty. The Romans came to Hafenstadt and built the many factories the town used to have. The Principality was flourishing with big expansions of wheat production, recruitment of new members, construction was booming and the political structure was getting in shape. The Royalist Party

and the Freedom Party

were established and running for the first elections on the 31st of August. By the Prince's decree, a colony (Neue-Kaltsburg) was established a couple of seas from the mainland with the first settlement Niederburg. Infrastructure (by road and rail) now had connected the entire peninsula. Architecture was very plain and loosely based on 16th century European architecture. 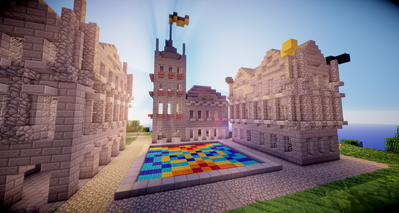 The old town square of Hafenstadt

Fall of the First State

During nighttime in Europe (where the majority of citizens lived) a terrorist griefed and destroyed most of the country's infrastructure and essential buildings. Since all members were new and unexperienced, a lot of the buildings were not reinforced and there were no bastions present, therefore the grief was too much for the citizens to handle. By the Prince's decision, citizens gathered their most essential belongings and moved the Neue-Kaltsburg. The Protection from the SPQR was officially over following the migration.

Rise of the Kingdom

The 31st of August concluded the first elections and the Principality was officially elevated by the Prince, following a ceremony with the first Prime Minister nokiababy and the newly elected Prime Minister K_WilhelmII of the Royalist Party. Here the buildings were now twice as big since the country had way more land. The Kingdom was concentrated in Die Hauptstadt, though there was never an official government building present. New members were constantly recruited, peaking at 13 active members. Duchies and Counties such as

Niederburg respectively were established and flourished. Bonn was the industrial powerhouse of the state as it held a lot of factories and an XP farm. Railroads, roads and canals were being constructed. It was at this point that the Kingdom joined the UNC. The domestic political system was reformed turning Parliament into the Royal Council, with appointed nobles from the King.

Decline of the Second State

Gradually, during October 2018, many of the members stopped playing one by one until almost nobody was active. The Kingdom was officially dissolved by the King in November[1], followed up by the annexation of Neue-Kaltsburg by the Romans following the Ravenna treaty. Long distance between settlements, little player activity overall in the region are some of the causes for this decline.

Revival and establishment of the Third State 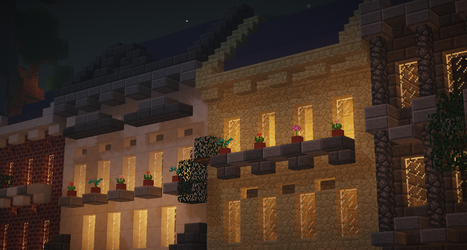 Following the treaty of Ravenna, the Romans cleaned up the Kaltsburg peninsula, which led the two founding members deyan and nokiababy returning to rebuild the country. With a new,renovated architectural style, more experience with the server and resources from the colony, Kaltsburg's reconstruction officially began on the 5th of December 2018. While the Prince hold some properties in Neue-Kaltsburg (or East Kaltsburg), the territory is now under Roman control with old Kaltsburger citizens appointed as local governors. The Territory may legally seek independence a couple of months in the future, though with the lack of active population that is very unlikely for now.

In April 2019, the Principality underwent a large economic project of turning Hafenstadt into a major trading hub of the region by making a large market square. Several countries have already expressed interest and are on the way to opening their shops. The architectural style of the town has also developed to include a variety of different architectural details and different materials/colors. The Royal Council has been re-established officially and its' first representatives appointed by the Prince. The First Act (Act I - A) has also been signed into law[2] with the aim of banning radical ideologies within the realm.

In May 2019, the Principality experienced a huge population growth, almost doubling its amount since the same time in April. Many new territories were acquired in the former lands of Varsany with the County of Weizenland (later renamed to Nederland) being expanded and the Duchy of Fennland and County of Neubonn being established. 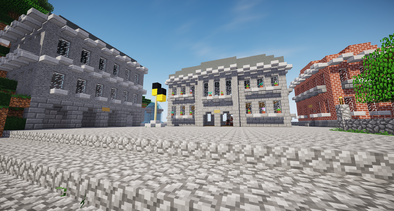 In Mid-Late 2019, the Duchy of Leuven was established and began developing. By that time most citizens of Fennland had quit and Kaltsburg was almost completely abandoned. In February 2020 deyan, as monarch of both nations, merged the two countries to make things more simple. On the 17th of February the Office of Governor of Kaltsburg was established for Kaltsburg to have an active leader in the region as deyan had moved to Leuven.

The coat of arms consists of the Princely coat, held together by the Crown. In front of it a shield with 5 segments. The top-left being the flag of Edelburg (Royal seat in Kaltsburg), Edelschloss (Royal property in East Kaltsburg) and (an upside-down version of) the Kingdom of Forland, which fell under the jurisdiction of Kaltsburg after Forland's king dissolved it. On the top-right, the coat of arms of Bonn, the biggest Duchy in the Kingdom of Kaltsburg, largest population and largest output of produce. On the bottom-left, the coat of arms of Niederburg, the first settlement in the colony and property of one of the first members HobbelJesse. The bottom-right is the old flag of Kaltsburg. In the center a golden lion on a black shield - a symbol of Kaltsburg since its foundation.

All Arms of political entities are handled by the Prince. Arms that represent sub-national entities are simply an animal (that represents the given area) on a one-colored shield. In-game however mostly flags are flown as the arms are used in documents and maps out of the game.

Kaltsburg-Leuven is a Constitutional Monarchy with a Royal Council. The council advises the King and it consists of: the King, the Governor of Kaltsburg and whoever the King deems fit to appoint. 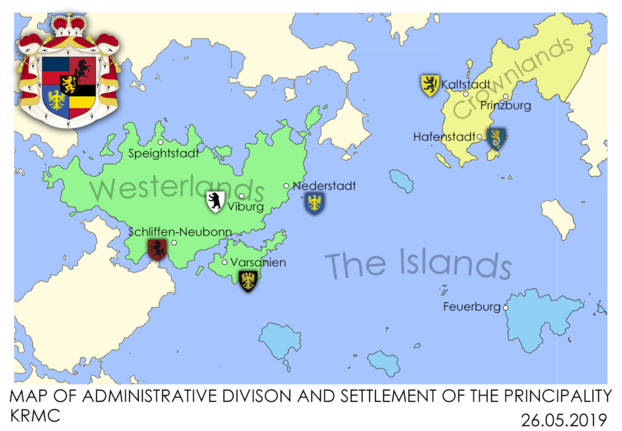 The Third Royal Council was assembled on the 17th of February 2019.

Kaltsburg is an observer state of the United Northern Congress. The Principality has never declared or participated in a war and tries to be friendly with its neighbors. The Romans are considered close allies as they helped the country establish itself by sending many resources and establishing factories, as well as suggesting Kaltsburg joins the UNC. The capital is open to embassies and diplomatic matters are conducted in the Diplomatic Affairs building on the Princely Square. On the 11th of January the Treaty of Hafenstadt was signed, which strengthened the bonds between the SPRQ and Kaltsburg. [3]

On the 14th of December Kaltsburg gained joint-ownership of Tierra de Conciencia's exclave north of Kaltsburg (Nordland) in the Treaty of Kaltstadt.[4]

The Principality is very well connected by roads which lead to every settlement on the peninsula as well as a rail leading from Kaltstadt to Hafenstadt. Rails also connect the Crownlands with the Westerlands (from Hafenstadt to every town in the Westernlands) A Roman-built railway connects Kaltsburg to Mount Augusta. There is also a direct rail connection with Verona, Varkonia.

The country has constructed underground ocean canals to help travelers pass through the area without having to surround the country.

The town of Hafenstadt is also home to a short tramway on Prinzboulevard.

First Established in Hafenstadt, then after a brief halt to its de facto existence re-established in Kaltstadt.

Responsible for domestic political, terrain and infrastructure maps of the Principality.

Responsible for all of the rail connections of the Principality. 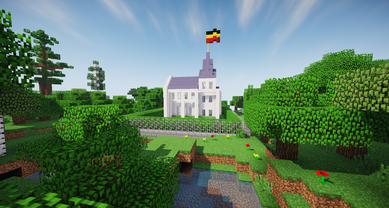 German is used for naming settlements, monuments, buildings, roads etc. while English is the most common language Kaltsburgers communicate with.

Architecture is based on Baroque European architecture. Stone bricks, stone and stone slabs are the most common materials in buildings along with brick and cobblestone. A very typical element of Kaltsburg's Architecture is the division of floors being shown on the outside by a row of stone slabs placed next to each other, with half of them being on the top of the block they're placed in and the other on the bottom. Roofs are usually covered with terracotta (either Cyan or Light Blue).H

In 2019 however a trend of using more colors emerged in whilst constructing the new Hafenstadt market square - materials such as bricks, sandstone and quartz were added to the list of used blocks in towns.

Since its foundation, Kaltsburgers have always shared materials with themselves, often in public warehouses in each town. All factories are public as they are owned by the Crown. Citizens are free do to almost whatever they want (as long as they consult with the Prince). In the nation's history the Prince had gone into only one argument with a citizen, which was over a height of a windmill. The argument was resolved rather quickly and there were no grudges held. During the great terrorist attack on Kaltsburg, only the windmill and the royal castle remained ungriefed, perhaps symbolizing the withstanding ability of the Crown and the common folk.

Retrieved from "https://civwiki.org/w/index.php?title=Kaltsburg-Leuven&oldid=27076"
Categories:
Cookies help us deliver our services. By using our services, you agree to our use of cookies.