The Entente-Laconia War was a war waged by the Entente and later Mir against the nation of Laconia and its allies the Latvian Soccer Dogs.

The Latvian Soccer Dogs (aka LSD) were an organization consisting of the nations of New Sovia, Adina, Nudist Beach, and Unitas, along with about a dozen individuals from various nations. On 7 September 2019, less than a week after the announcement of the new association, Soccer Dog fortifications in the Nudist Beach region of the southwest quadrant of the map were targeted by Entente and SATO forces, driven by a belief that this new association was simply a front for a new raiding crew. The primary evidence for this assault was out-of-context screenshots taken by a leaker in the Soccer Dogs' discord, apparently showing a plan to build a vault and then raid the city-state of Icenia, well known to be disliked by many Soccer Dogs. While LSD denied these accusations, by West Isle members own admission LSD had pledged possible support to an insurrection aimed at gaining West Isle independence from Icenia, though this remains a contested topic. [1], While the Icenian government publicly stated that it did not consider these threats to be serious[2], World Police still maintained their ground.

In the face of a hopelessly asymmetric war, the less militaristic of the Soccer Dog nations publicly pulled out of the group; importantly, Adina quit the association.[3] Nudist Beach was completely flattened, and the leader of Unitas was prisonpearled by Hjaltland. The citizens of New Sovia buried their valuables and evacuated their city, many of them fleeing to the friendly arms of Laconia, being given shelter in the megafortress Mt. Doom.

Immediately following the 7 September attack on Hotel California, the leader of LSD, ashnwill, turned himself in to the Entente to avoid wasting time fighting an internet LEGO war and quit the server. He gave his friend FRESH_candy, a Laconian oligarch, reinforcement-bypass permissions to the Hotel California vault pyramid, in order to make sure his fortune didn't go to waste. A few weeks later, on 28 September, Laconia decided the tensions had calmed enough to venture over to the vault site in Nudist Beach and attempt to tear down the vault pyramid. Intending to transport thousands of diamonds back home on a trek of 10km, a force of 13 men was brought to ensure the safe transport of the materials. There was no immediate response from Entente or others, which was expected given that it would be one less vault pyramid they didn't care for. However, on the way back, a joint contingent of Mir and Entente forces chased the Laconians. 6 Laconians were pearled, leading to a loss of ~700 diamonds. All of the soccer dogs in the Laconian force survived, except for Topher3001 who was exilepearled (but later freed by mistake). One Laconian leader, Tofee_Dodger, was also pearled.

In the wake of this action, attempts were made by Laconia to contact Entente leadership and diplomatically resolve the incident. Entente offered no olive branch, and mostly had a policy of radio silence.[4] 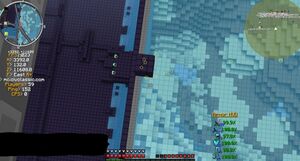 The war began in full swing on 5 October, when a force of 18 Entente fighters laid siege to Laconia's capital, Mt. Doom, with the stated aim of pearling Pirater, a Soccer Dog.[5] Due to the recent loss of 6 fighters, one leader of Laconia being on vacation irl at the time, and the unexpectedness of the attack shortly after Laconia's attempts to find diplomatic common ground, only 4 fighters were immediately available to defend Mt. Doom, leading many to believe that this would be the end of Laconia's 2.5 year (to date) history on CivClassic. Despite this, the Entente forces were repelled in their original attack tunnel, a 5km show of wealth made of iron-reinforced obsidian, stretching all the way back to Hjaltland. They tried again with another attack bridge and were once again repelled.

In the aftermath of the attack, the Entente's attack tunnel was captured and disabled by Laconia, who began mustering forces to resist.

The "Eternity" vault at the South Pole, after being disabled by Laconian forces

Late on the night of 17 October, a Laconian force of 15 fighters built a skybridge to Hjaltland's south pole vault, known as Eternity, intending to disable it and prevent it being used as a staging location for attacks, given its proximity to Mt. Doom. They broke bastions undetected almost all the way to the center of the vault. Upon reaching a satisfactory point, they dropped to bedrock and began griefing with massive quantities of reinforced obsidian, being roughly 5,000 iron reinforced obsidian, and 10,000 stone reinforced obsidian. The Entente was unable to respond due to the suddenness of the attack and the odd hours, and the Laconian force finished their mission and returned to Mt. Doom completely unopposed.

This was a loss for the World Police, and a stark reminder that they are not untouchable.

Various other actions have been taken, such as the griefing of the "Colossus" trench - a derelict formerly-Channer town - in Hjaltland.

On 1 January, after many previous scouting missions, Mirian forces entered the war and began an attack on Mt. Doom. Mir forces began building a small cobblestone area to utilize as their central hub for the siege. On the first day this large cobblestone bunker was expanded by Mir as Laconians attempted to engage and stop them outside of the hastily constructed rings in the Mt. Doom underbelly. After a couple of hours of this, Mir pulled back for the night to get some rest before trying again the next day. During this time Laconia attempted to bulk up defenses and build additional obstacles. The next day the attacks on Mt. Doom resumed, this time with the Entente involved as well. The attackers began a tunnel to breach the rings starting from the cobblestone base Mir had constructed the day before. Despite Laconian resistance, the attacking forces penetrated the third ring. During the breaking of a tower built by the Laconians in the third ring, Diet_Cola was almost spleefed into a trap but was able to escape due to his previous knowledge of such situations. After the tower in the third ring was taken by World Police forces, Ez2Clutch was pearled by Laconian forces after lagging out on top of the tower. A ceasefire was called and World Police forces withdrew from the battle for the night. The following day, the Entente performed a small attack without the assistance of Mir, but pulled off after an hour when met with Laconian resistance.

Two hours later Entente forces returned to the mountain and broke the remaining rings and ground bunker uncontested. They were able to finish disabling the underbelly of Mt. Doom and spent the remainder of the day building bridges and filling in portions of the hole, hindered somewhat by light Laconian interference. The vault pyramid was now exposed and Ez2Clutch's pearl was vulnerable. In response to this situation, Laconia and NATO, also at war with Mir, decided to align themselves. A successful joint operation was conducted which transferred Ez2Clutch out of the war zone and to a NATO vault far across the map. On the return trip back to Mt. Doom, despite being bolstered somewhat by NATO reinforcements, three Laconian fighters were ambushed and pearled by World Police forces. After breaching the ground bunker, World Police forces stepped into the mountain fortress for the first time. The lower levels of the fortress were breached and the farming floor was taken. Few defenders were left standing in the upper levels of the mountain to resist the incursion. However, World Police forces withdrew for the night and resolved come back the next day and finish off the mountain. During this period, a few Laconians attempted to evacuate all valuables from the mountain and burnt what was left. Defenders also attempted to refortify the breached lower levels and disable World Police offensive structures. Despite this effort, World Police forces bridged the upper part of Mt. Doom uncontested, and finally breached the upper levels of the fortress, becoming victorious in the Battle of Mt. Doom. After four days of fighting from both sides, Mt. Doom was finally neutralized. The World Police began looting the mountain and disabling it as a military structure.

Aftermath of the War

The Laconians relocated to a different area on the map, the Holy Jaded Empire[citation needed], and hope to one day return to their homeland. 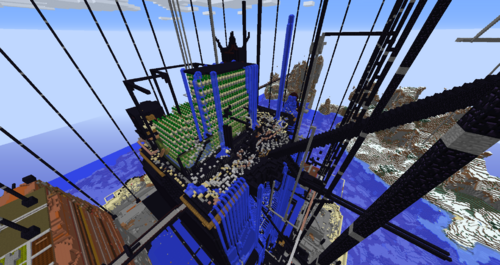 Retrieved from "https://civwiki.org/w/index.php?title=Entente-Laconia_War&oldid=42516"
Categories:
Cookies help us deliver our services. By using our services, you agree to our use of cookies.