The Maester Alliance is an ancient order focused on preserving the stories and texts that have been written by Minecraft players into in-game books.

The Alliance is currently focused on managing the Shardore Tower Library in Mt. Augusta.

The book collection of the library can be found here.

After the abandonment of Lazuli, NateMagic traveled north to an old mining outpost and started to build a great hall that would become The Citadel, other ex-lazulians Ttocs_is_Awe and SomethingSaucy came to join him and expanded the hall that housed many texts and added a village next to it. They were both collecting books and writing new ones. The three of them reached an agreement and named themselves the Maester Alliance.[1][2] The Maester Alliance was announced officially to the Civcraft subreddit by SomethingSaucy on the 2nd of March 2013.[3]

The headquarters of the Maesters in Civcraft 2.0 was the Tenpo Assembly. It was named "after our ageless nature" and the distant location "that has been forgotten by time" by using the Toki Pona word for time.[4]

Set up a facility on CivTemp and later built a library called the Tawa Assembly Library.[4] After a vote was held it was named Tawa after the Toki Pona word for travelling, a name suggested by Logic_Man.[5][6] 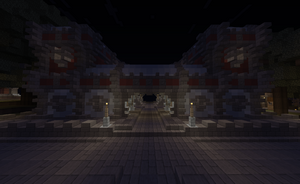 Maester FabledMrFox creates the Library of Augusta within Mount Augusta and with Marcus_flaminius's permission leads the Maesters on Devoted.[8] Helping FabledMrFox was TaylorLCling who would later go on to become a Maester.[9] The library had 44 books in its collection at one point.[10]

The Alliance issues rulings, known as decrees, to govern their internal workings. As of December 13, 2021, these are the known decrees:

Retrieved from "https://civwiki.org/w/index.php?title=Maester_Alliance&oldid=45084"
Categories:
Cookies help us deliver our services. By using our services, you agree to our use of cookies.