CivRealms is a Minecraft server in the Civ genre whose latest iteration (CivRealms 2.0) was started on May 19th, 2019.[1] The server has a rich political landscape and has, throught its year-long history, already had its fair share of notable historical events. This page aims to provide a general overview of the history of the server.

Before the current iteration of CivRealms 2.0, there was an open beta of the server, that lasted from __ to __.

An anthropological history of the early civilisations of CivRealms faces some serious difficulties. Firstly, some of the most powerful nations were active on the discord and in-game, but did not seriously devote to a subreddit presence, meaning that evidence of their existence is limited. On the other hand, many of the civilisations that strove to leave their mark on the world in this period posted to the subreddit but were often merely one-man nations unable to seriously influence events.

Much of the early history of the server was dedicated to the acquisition of bronze, a necessary ingredient in stepping up the tech-tree, and wool, which could not reliably be farmed due to a lack of knowledge of efficient farming methods. Southern and northern nations such as Tenochtitlan and Carbon began trading copper and tin[4], while there was also significant debate over the best means of mining[5]. Many of the techniques developed in this period are continued even today, despite the proliferation of enchanted mithril tools.

Norlund was one of the states founded in this early period[6], as was Wheatistan.

The rise of multiple states in this period saw the rise of the Inca, one of the first military groups on the server. In this period wars were fought with leather and iron armour, and Carbon was seen as highly advanced due to equipping their soldiers with steel armour. The Inca Wars were a period of wars between the Inca, Varathia, Tenochtitlan, Carbon and other peoples and states throughout much of this early period. Eventually the Inca would be defeated, and the Inca today no longer remain.

New states began to spring up such as Amaryllis[7], and Carbon and Varathia finally actually made their claims public[8][9].

A number of long-standing nations were founded such as New Jersey[10] and Conqui, but did not make it to the present day.

During the Brewer's Guild Revolution in Varathia, it was decided by the coup leaders to not pearl Emperor Aresot but to instead peacefully move to the eastern coasts desert to form Alexandria. Alexandria am be independent now.

MCSPenguin during this time was also busy laying the groundwork for the servers future economic hub, CivCorp. This would be done to the north of Varathia, in land that was formerly part of the small nation of Trinacria.

On the ___, VolutionFs founded the Kingdom of Anvard on an island in the southern part of the Bobangan Jungle. The territory that Anvard was founded on was also claimed by Bobanga. On December 23rd, 2020, DarkyDu built a building in the middle of Anvards claims, to enforce the Bobangan claim on the territory.[12] This started a fight with VolutionFs, which resulted in VolutionFs pearling DarkyDu. After much negotiation, the conflict was resolved and Bobanga ended up recognizing Anvards claim.

Before the Ez2War, Accelerada was a nation originally named the Free Economic Zone of Accelerada (renamed as the People's Republic of Accelerada), is a nation that seemingly exists from a combination of their member's varying skillsets, and their neighbors generosity, namely Varathian Emperor Aresot. It's noted that Accelerada is one of the smaller nations within the map, and despite being given permission to use a Varathian AN and bought some Agotepean land, is still among the tiniest nations in the server, and likely the smallest within the map.

Founding of the IWW 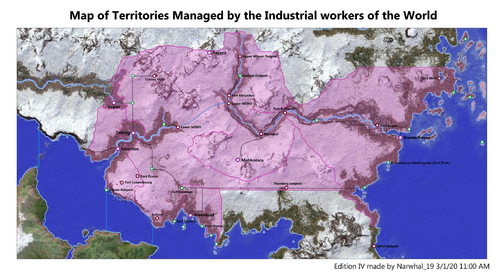 A map of the IWW, showing the borders between the communes and all of the settlements.

On January 24th, 2020, the founding of the Industrial Workers of the World, also known as the IWW, came to be.[13]The goal of the IWW was to serve as an organization of different leftist countries and cities.

The first communes were Tolstoy and Vescau, which were founded on __ and __ respectively.[14] Many new members followed shortly after, although not all of them stood the test of time. On January 20th 2020, Narwhal_19 and Orcishtimmy founded Bremerhaven on the east coast of Napistan. Bremerhaven was originally a part of the Commune of Vescau, but became independent when Vescau collapsed and turned into the Commune of Exarchos. Bremerhaven re-joined the IWW shortly thereafter and quickly grew to be one of the largest communes in the IWW.[15]

On January 28th, 2020, the former Kingdom of Anvard joined the IWW, becoming the Free Republic of Anvard.[16]

On the 1st of February, a player by the name of PartyAnimal committed what has been described as the servers first terror bombing. PartyAnimal pearled RainOfPain123 and exploded a lot of TNT in the Commune of Tolstoy, destroying many of the buildings, that hadn't been reinforced. The reason most buildings were unreinforced was that Tolstoy had been built by newfriends, who hadn't yet learned about the importance of reinforcing everything.

That one time carbon sold an island to yamato (this might be moved to yamatos page idk. we could also have a short version of it here and then a longer version on the yamato page)

One of the original nations of CivRealms, Norlund grew slowly, but surely, expanding further around their territory, and despite being precariously located next to several pvper nations/empires, still somehow managed to continue existing. It's King, King Terry the III, helped found the nation, and worked tirelessly on the nation, expanding it to it's peak claims, and working closely with many nations, most specifically Carbon. Of note, just before the Ez2War, Norlund experienced it's only rebellion, the Tallumh Rebellion, which was swiftly crushed by the King's forces.

The Ez2War was the first conflict on the server that achieved the scale of a world war. The war involved most of the major power and left a lasting mark on the history of the server.

The Ez2War was fought between the members of the Fight or Die Coalition and the Ez2Crew. The war was a result of tensions that had been rising since the day the Ez2Crew joined the server.

On the 5th of January, players from the Ez2Crew joined the server asking to join a country. They were invited to Bobanga, and given some basic tools, weapons and food. Within the first twenty minutes of joining they had raided the storehouse and killed the cows of Dar al-Vexler. When this crime was discovered, a bounty was put on their head by Bobanga publicly. They began to head north, but returned to Bobanga to fight DarkyDu. One Ez2 fighter was killed, but the remaining two killed DarkyDu, who respawned and waited for reinforcements from Alexandria before pressing on them, when they fled. After tripping snitches throughout the south-central belt, they were pearled one by one, and Ez2Clutch and ThePayman were transferred to Bobangan prisons. Ez2Kill was pearled by Moloka but later released.

After the pearling of the Ez2Crew, international pressure forced Bobanga to release them again, with Convoy of Carbon guaranteeing that they would not strike Bobanga again, and reparations being paid.

When the ez's grinded and built a vault

The claims dispute between Accelerada and WE that the Ez's joined

Raids on Accelerada and Alexandria

After the fall of the Ez2Vault, the economy of the server was devastated and the player numbers in the week following the war were at a record low.

That one time civcorp was closed for a while

The Age of Migration is the period that followed shortly after the Ez2War. It was marked by a great influx of new players coming in two waves. The first wave was started by a series of reddit posts that reached the top of the r/imaginarymaps subreddit. These posts brought many newfriends to the server, helping bring the server back from the low player numbers it had had in the immediate aftermath of the Ez2War. As the servers player numbers grew, many people from the CivClassics server decided to give CivRealms a try, which created a second wave of new players.

When civcorp opened again, this time with a whitelist

That one time bobanga was partitioned after the war

That one time New Jersey was partitioned for being inactive. The conference record and discord can be found here: https://discord.gg/eZRWprUazy

The involved parties were: 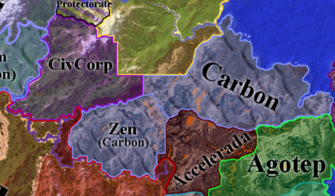 The agreed upon results of the New Jersey Conference in which land was divided after the nation had fallen into inactivity.

That one time Mount Augusta moved to CivRealms.

All the info is on the articles above, so we need to summarize it here.

The group proceeded to raid the IWW embassy in Alexandria, where Anvardians dublyu_ecks and fantasyworm had fled to. The militia almost killed dublyu_ecks. Narwhal_19, an IWW member, was pearled and taken prisoner in Alexandria. Every other Anvardian was extricated by IWW agents from Anvard and Alexandria before military control was exerted on occupied Anvard[18].

That one time the Western Empire recognized Acceleradas claim to Unitas

The conflict between Rainie, and many members of the IWW, about who should have mod ranks on their discord and nl groups.

Founding of Odresh, Bloemfontein, and Tchad

Retrieved from "https://civwiki.org/w/index.php?title=History_of_CivRealms&oldid=39899"
Categories:
Cookies help us deliver our services. By using our services, you agree to our use of cookies.