Eilon was a shard in Civcraft 3.0 that mainly consisted of a large forest of huge trees. A moderately-sized shard, Eilon is located directly west of Ulca Felya, southwest of Abydos, and northwest of Padzhar. 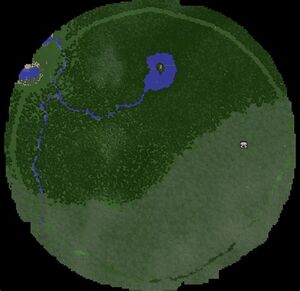 Gensokyo was located at Template:CivcraftCoord3, and had mainly built a Japanese city under and inside the canopy of the large trees. Despite the difficulty, Gensokyo prevailed and their community banded together for a while until the next server came after Civcraft 3.0 had died.

Mount Augusta was located at the eastern end of the shard, housing a large city as close to the portal as possible at Template:CivcraftCoord3. It acted mostly as it had prior to 3.0, as a minarchy with a mayor ruling over it, similar to today.

Volterra, a predecessor to Varkonia was located at near the north of the shard at Template:CivcraftCoord3. The country surrounded a large lake that housed two cities, with a large bridge connecting the two settlements. Various leaders like ChrisChrispie went on to lead other countries like Icenia in later iterations.

Alpoko was the smallest of the bunch, located in the northwest, having a few various cities throughout the quadrant, all of whose locations are unknown. Mrmamizoupie was the leader of Alpoko at the time.

Other countries in the shard included Arran, now a borough in the current iteration of the Commonwealth, Vallera, and Akibahara.

Additionally, one of the primary organizations that sprouted from the shard was 3.Road, an organization dedicated to building roads and infrastructure to connect all the shards of Civcraft 3.0. 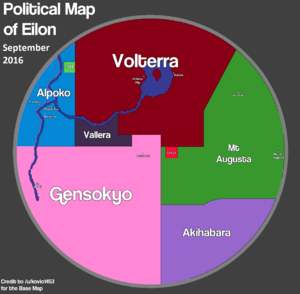 This history is copied from Gensokyo#Civcraft 3.0 Blues and may not carry accurately to the rest of the shard.

Volterra, the most powerful of Gensokyo's neighbors, quickly made a move to claim as many of the pylons in Eilon as they could, e-lawyers be damned. Gensokyo, wanting a pylon of their own, attempted to strike a compromise with Volterra. Although talks were making good progress, a new challenger entered the arena. A mysterious nation on Gensokyo and Volterra's border, Province, claimed the last two pylons available on Eilon before Gensokyo could create one. This threw a wrench into the gears, as Volterra was unwilling to crack down on Province and led Gensokyo into a dangerous situation. Talks of war began to seep in amongst Gensokyo and its allies, and internal factions within Gensokyo grew discontent with these rumors. Some called for war, and some called for a peaceful solution. As if things couldn't get any worse, waves of raiders began to descend upon Eilon. Volterra was hit the hardest, and even lost one of their pylons in the attacks. Gensokyo was not spared either, and one of their highest-ranking members was slain while attempting to flee the city of Morieji with a large sum of diamonds in tow. In the midst of the chaos however, Gensokyo was able to claim two pylons, at the cost of potentially provoking Volterra.

Gensokyo decided to claim the pylons, despite the risk of angering Volterra. The pylons were constructed in hidden locations, and the people of Gensokyo hoped that their prospects in Eilon were secure. These hopes were short lived, as mysterious assailants destroyed the pylons in daring midnight raids. Rumors began to circulate, and told damning tales. Not only was Province responsible for the raids, but they were in league with Volterra. Gensokyo's intelligence service wasted no time following up on these leads, and this resulted in a series of covert operations to undermine Volterra's influence throughout the server. Although these operations were successful for the most part, they painted a larger and more concerning picture: 3.0 was dying, and these artificial conflicts driven by confusing design choices were a symptom of this fact. When a new server, Devoted, appeared on the horizon, some in Gensokyo saw potential for a promising new start, and an escape from the clusterfuck of 3.0.

Retrieved from "https://civwiki.org/w/index.php?title=Eilon&oldid=38620"
Categories:
Cookies help us deliver our services. By using our services, you agree to our use of cookies.