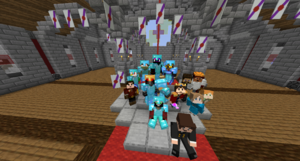 Having spawned in Verda, he made his way to Jevoghnya in Nro'meagh where he was recruited by Avo. Spending some time in Jevoghnya, he became bored with the area's lack of activity or creative freedom and upon hearing of "the big city" of New Yoahtl City, he promptly set out with his most prized possessions to Yoahtl. There he was accommodated in a small apartment above the XP exchange, and after a while upgraded to his own plot in the city after gaining citizenship. Once his house was finished, he fell into a period of very limited activity, finding that similarly to his previous home, Yoahtl's capital area was also somewhat devoid of activity, mostly due to the strict limitations on expansion within the region. Months went by in which he would log a couple times if at all, and on those occasions he would largely be exploring or just running around wasting hunger. The turning point was when he happened to log on the day of ObtainableSpat's coronation as Emperor of Imperial Truidence. After attending his interest was renewed in the server, and in within the next few days he would set out to trawl the ruins of Mount Augusta. In doing so, he discovered a griefed floating city in the middle of the sea labeled "Venice." Cleaning up the lavacasting and waterfalls, he attempted to revive the city himself but soon found that this would play out to be a bit more of an undertaking than he had anticipated. So Venice sat uninhabited for months until Shadow returned in April of 2021 alongside thatguynick15 and MightyMaya583, when they would found the nation of Venne where they remain to this day. He also participated in the Battle of Eddie Murphy as a supply runner for the coalition.

Shadowvdark's main motivations on the server lie in worldbuilding and exploration, the latter of which has caused him to have visited many of CivClassics' greatest sites.

Retrieved from "https://civwiki.org/w/index.php?title=Shadowvdark&oldid=43796"
Category:
Cookies help us deliver our services. By using our services, you agree to our use of cookies.