New Yoahtl City, shortened to NYC, is the capital city of Yoahtl and is often regarded as the most dense city on the server. The city was founded on July 11th, 2017 after the short Yoahtl-Vzis Conflict over the island NYC sits on. Yoahtl also hosts a newfriend spawning location surrounding NYC, causing it to be a central point for many new players. NYC also is infamously known for the lag that it causes, dubbed the "NYC curse", due to the density and number of entities within the city.

The Founding of NYC

After the first Yoahtl-Laconian conflict, Yoahtl fled from it's original capital city, Axochitlan, and ended up settling in Commonwealth land. after a few days of recollection, Bgbba, St. Leibowitz and Quauhtli_Mia found what is now the location of NYC, and began to move Yoahtlans into the area. However, unbeknownst to the fledgling residents, the nation of Vzis, led by DroidJoe, held claims on the island they called Gapplar. The claims were never officially published on any map or on the subreddit, so many Yoahtlans reasoned that the claims were illegitimate. Many of the Vzis, however, argued that Gapplar is indeed theirs and that there was no need to actually officially publish any claims. This was also motivated by Vzis wanting the land for farms and the diamond veins underneath it.

It was widely expected that the Yoahtlans would have been steamrolled by Vzis and that they would either be removed from the server entirely or forced to move elsewhere again. However, JohnFairfax and Bewsiej arrived and fought on Yoahtl's behalf, mostly to try and weaken Vzis for Lexington. During the fighting, Vzis snuck snitches and flags near the yoahtlan settlement, and pearled INightLightDX while they fled an engagement. The war ended with a Peace Treaty[1] between Vzis and Yoahtl, mandating that all pearled players be freed, Vzis payes Yoahtl reparations and lifts all claims on the island. Droidjoe, upon losing the conflict, simply said "Is it really surrender if we get what we want?"

While NYC was founded a week prior to the end of the conflict, it's undisputed beginning was on July 11th. 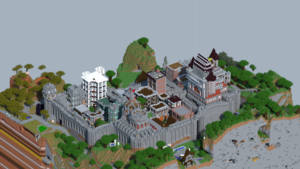 NYC was built with two goals in mind: Be a city secure enough to repel raiders and other hostiles, and to make a dynamic and evolving city that didn't look like every other civ city. One of the first fortifications added to the city was the wall, inside of which held an IRO barrier and was topped with archer positions. The second set of defenses was the trench, which served as a pit to knock attackers into for cornering and pearling. The original trench dig served as a massive infusion of wealth and stone into the early city, fuelling the reenforcement of many homes and giving many citizens large amounts of iron and diamonds.

The Citadel was also built, hosted in the northwest corner of the city, as the main concentration of government resources and the final defensive structure for NYC. THe Citadel also has it's own trench, connected to the larger city trench, and had multiple bunkers underneath it with a great deal of defensive structures and secure storage. until 2019, it was also the host of most of the government's wealth. However, due to fears of centralizing wealth too greatly, the government has since stored 70% of the wealth elsewhere.

Yoahtl stayed neutral during the beginning of the Somber War, and NYC stayed ungriefed or attacked by either side. Despite this, NYC recieved a number of defensive upgrades. Additional entrances to the city were created, as well as the bedrock pyramid and bunkers. Bgbba, who served as the Alcuahtl during this time, implemented more and more restrictive admittance into the city, ensuring only trusted people can enter the city. This was coupled with a new dereliction policy, ensuring that inactive residents didn't retain property.

Once Yoahtl joined the Western Alliance and began contributing to the war effort, Yoahtlan citizen WackyAki began to produce bastions and exp for Yoahtl, and completely vault bastioned the island, protecting it entirely from grief.

Post-War and the UnderCity

After the completion of the Somber War, NYC continued to be an active and productive location, with Alcuahtl Orangewizard and others such as WingZero54 and Meat312 grinding and botting exp materials. Around this time, the city continued to be updated, changed and rearranged. As a result of strict dereliction laws, many of the cities residents could tell you nearly to the month when any screenshot was taken, due to the skyline changes.

One notable addition to the city at this time was the Undercity. Due to the burgeoning population on the surface, and the then-unsuccessful attempts at homesteading, NYC residents decided to dig 40y levels below the city and dig the entire area out as an underground location for housing and shops. It had the same surface area as the surface, with a grass floor and a blue concrete roof simulating a sky. In the southern area, a massive glowstone sun was created as a form of lighting, and wool clouds dotting the sky. The undercity could be accessed by a waterdrop, and could be left via minecart elevators.

While the undercity was a flurry of activity when it was first developed, it soon became a dead zone and source of lag. On hindsight, there were several major issues. First, many people who held property on the surface of NYC also built property in the undercity, eliminating a lot of opportunity for new residents to build a house or business. Second, many of the undercity builds were far larger than the surface builds, restricting and reserving a great deal of space. Further, there wasn't an intuitive entrance to the undercity, resulting in many businesses suffering due to a lack of customers. Finally, the lag caused by the undercity resulted in Alcuahtl OrangeWizard to derelict the entire undercity. While many destroyed their own builds, many inactive players kept them, and instead of properly derelicting the builds, many Yoahtlan citizens at the time simply filled in the undercity with stone, encasing many builds.

After a period of relative inactivity, the obby bombers, self-names as the "ransackistanis", began to obby bomb and attack across the server. Several obby bombers scouted NYC as a site for grief, yet concluded that the relatively high defenses, well snitched area, and bastions made the city a difficult target to carry out an attack. Yoahtlan military forces, led by Neotide and Bgbba, began to organize war parties to neutralize and attack the obby bombers. At this time, the fledgling alliance known as the UDF began to dig and construct ice roads throughout and in between allied nations. NYC became the Yoahtlan hub for many of these ice roads, allowing NYC residents to travel anywhere in Yoahtl in minutes.

During this time, the NYC citadel was also updated, allowing for greater security of government wealth and industry. The island NYC sits on, Nixoatlan, also received its own trench, dug by Yoahtlan citizens.

After the Infinity War was completed, many people on the server went inactive, taking long breaks from the server and allowing for the server to go slightly dormant. NYC, similarly, went into a period of inactivity, with Alcuahtl MightyOddish and WackyAki being the only people consistently in the city. From January to about May of 2021, very few builds were created in the city, with much of the activity being focused on maintenance and military affairs.

Towards the end of May, Councillor WackyAki began derelicting what he called "High-lag builds", starting with 3 builds outside the city wall, the YNBC brewery, the Andeluvean towers, and Loungebob's pickaxe store. This created a number of new plots for residents to build in, and revitalized much of the economic activity in the city.

Currently, NYC has over 30 residents and citizens living within its 10 chunk area, with over 15 businesses and several factory areas. The city still has a great deal of defensive infrastructure in place, with more being planned by Alcuahtl WackyAki. The city is the primary Yoahtlan exp generator, with most of the factories being located within the city walls. Many nations also have shops within NYC's walls, including Hjaltland, Imperial Truidence, Etherium and Southshire. Many of the cities apartments are routinely checked for occupancy or not, and derelictions still stay incredibly strict.

When the city was first planned out, Bgbba and St. Leibowitz came to the conclusion that they wanted NYC to stand out from other civ and minecraft cities. Far too often, many large cities have lax dereliction laws, allowing for massive and empty skyscrapers and sprawling builds to be made with no recourse for the city government nor neighbors to remove it. As so, Yoahtl has developed a unique and strict dereliction policy in NYC used to this day. Should a new resident come, they have a choice in apartments they can live in, either privately operated or for free, in government provided housing. Once a resident contributes to the city consistently and significantly, they may, should an area be made available, be given an area to build in provided by the government. Should the build infringe on free movement or restrict access to other properties, or its an ugly building, the government reserves the right to ask you change the build. Once the build is up, the land is considered yours, unless you are relieved of the land via a lawsuit or should you leave the city. If someone is inactive for over a month, their build is moved onto the dereliction docket, where a government official reviews the build and orders its dereliction. The build materials, unless especially valuable, are sent to the general government storage in the citadel, and all the goods are held in the dereliction room, should the player return to claim it.

NYC is home to several religions featured on the server. Currently, the dominant religion is bgism, which is a meme religion meant to parody peoples unironic belief that bgbba is a cult leader in Yoahtl. The religion features a heavy focus on Rails, bgposts, and anti-elawyering.

Another such religion is Pigeonism. Due to the inadvertent explosion of chickens in NYC, several people have dubbed them Pigeons. MightyOddish has also taken up the habit of using name tags to name the chickens "New Yoahtl City Pigeons" and MechanicalRift have begun to place Pigeon shrines in Kobylinski, NYC and other places. On the 12th of every month, MechanicalRift collects as many chicken eggs as he can and travels to a random city on the map to hatch as many chickens as possible. So far, Icenia is the only city to have had chickens hatched.

Retrieved from "https://civwiki.org/w/index.php?title=New_Yoahtl_City&oldid=40728"
Categories:
Cookies help us deliver our services. By using our services, you agree to our use of cookies.