Mechanics that change how resources are found, produced and traded. 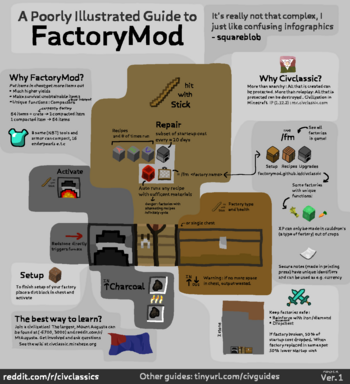 Factories produce items with a higher yield then vanilla crafting. Some items may only be produced with factories. There are many factory types, each containing distinct recipes.

Create a factory by placing a furnace, a crafting table and a chest (or trapped chest[1]) side by side. Hitting a factory component with a stick in hand is used to interact with the factory.

Complete the factory setup by placing exactly the ingredients required for a desired factory in the chest. Use the commands /fm and /fm [factory name] to see all factories and their recipes.

Factories have health which degrades over several months[clarification needed]. When the health reaches zero only the repair factory recipe can be ran. This recipe is found in every factories 'Select a recipe' GUI and is symbolized by the furnace item. The cost to repair a factory ranges from 5 to 15% of setup cost[citation needed]. After 1000 days in a broken state the factory will break permanently and irreparably. If a component (furnace, crafting table and chest) or all components of the factory are physically broken they can be replaced in the same location and the factory can be recreated for half of the initial factory setup creation cost.

Compacted items look no different, yet their lore text can be found on mouse over

A list of all factories, their recipes and costs, can be found in the factories page.

Experience is not dropped by any vanilla means (mobs, ores, smelting). Instead it must be made using a Cauldron factory. Each has four recipes taking various farmable items as input. Upgraded cauldron factories provide more efficient conversions.

Alters the growth rate for plants and animals {source, config}

Growth rates drastically vary across biome type. In some biomes certain plants will not grow at all. There are two types of growth rate:

A biomes growth rate can be checked in multiple ways:

In an optimal setting growth takes around 3 hours for small crops like wheat and potatoes, and for trees between 3 to 8 hours. Growth rates are generally lowest in realistic or reasonable corresponding biomes. For example, the biome of deep ocean has one of the worst growth rates. ReaslisticBiome's also changes fishing probabilities and one can hit the ground with a fishable item to see its fishing probability (if it is not zero). Fishing is restricted to water biomes[citation needed].

The growth rate of a tile can be improved by placing clay blocks directly beneath. Placing more than 4 clay block below will not improve the rate further. Two exceptions exist. 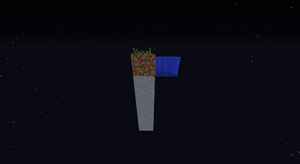 Crop growth is persistent, meaning crops will continue to grow when chunks are unloaded

Most plants need sunlight, either directly above, or through transparent blocks such as glass. This is not the case for netherwarts and mushrooms.

Placing a glowstone (or redstone-lamp[citation needed]) block above or adjacent to a crop lets the crop grow (albeit slower) in situations it normally would not. This includes crops which are underground or in inhospitable biomes. To grow pumpkins and melons with greenhouse, place the glowstone block adjacent to the free block where the fruit block will grow, and block all other free spots so that the fruit can only grow next to glowstone.

Ores have a random chance of spawning adjacent to (or replacing) blocks which a player mines (HiddenOre). If the block is stone or terracotta the ore will be an overworld ore[clarification needed]. If the block is Netherrack the ore will be a Nether ore[citation needed]. The chance of an ore block spawning is based upon: number of faces revealed by breaking a block + block itself. Ore spawn chances are dependent on y-level, with probabilities roughly corresponding to vanilla.

Ore spawning decreases after many blocks in a chunk have been mined.

Emerald Ore is not spawned via HiddenOre. It can be found only in the Extreme Hills + biome in bunches of 1 to 10 ore blocks, making it considerably rare (whereas in vanilla they only spawn as single blocks and also in "normal" Extreme Hills).

Diamonds spawn at the vanilla height, below layer Y=17. Unlike all other ores, diamonds will spawn in HiddenOre veins. Finding a diamond thus indicates a cluster of nearby diamonds. Veins are randomly generated using a Perlin noise. The vein itself is a disc rotated in 3d space. The diamond density in a vein is higher near the center. A message will be displayed every time a diamond ore spawns.

Mining a long tunnel is a good way to find veins. If a player already possess resources, one of fastest ways to mine is using a haste II beacon and efficiency V silk touch pickaxes. Cheaper diamond mining methods include wjkroeker's method, one of the most space efficient. If a player has a minimap mod, it can be useful to waypoint or otherwise mark diamonds to discern the shape and center of the vein.

Mining stone blocks has a random chance to drop a fossil. Fossils are a lored Prismarine Shard. They can be cracked by using the "Ore Smelter" factory for random, albeit unlikely, treasure.

It is customary to put a sign on the chest with the exchanges. However, if you left click the chest there will be text that says what the input and output for the chest are. Note: Always check that there is an output! You don't want to put in diamonds only to realize you gave a free donation because they forgot to add an output

There can be multiple exchanges available from a single shop chest. Make sure to left click and be looking at the exchange you want (For example Exchange 1/2 or Exchange 2/2). Hold the input item in your hand and then right click the chest. The input will be removed from your hand and the output automatically added to your inventory.

If you don't have access to the items you're buying/ selling there are other commands you can use.

Note: The name of the item has to be the Minecraft data name. For example, dark_oak_sapling.

While holding an exchange, use the following command to change the quantity it trades:

For example: /ies amount 5. This will change the exchange to trade 5 of whatever item

Enderchests search and return contents of nearby shopchests when clicked. More information.

Trade with nearby players {source}

Type /trade within 5 blocks of another player to open a trade GUI.

A variety of frameworks such as AdvancedMacros can be used to automate tasks. In particular bots are used extensively in the creation of XP. All bots must abide to server botting rules, which include the prohibition of reading environmental data.

Brewery allows the creation of potions through a multi-stage process of fermenting, distilling and aging. These potions also make players drunk. For potions used in combat, vanilla brewing is still used.

Killing a mob with a weapon that has the "Bane of the Arthropods" enchantment has a chance to drop a spawn egg item for the slain mob type. Each level of "Bane of the Arthropods" will increase the drop rate by 3%. The drop rate will also be increased by 2% for every "Looting" enchantment level. A monster that drops a spawn egg will not drop any other loot.

It is possible to get the spawn eggs of all passive mobs except for Snow and Iron Golems.

RailSwitch allows for setting up and choosing between travel destinations in rail lines.

Restores a glitch from old minecraft versions that allows string to be converted into obsidian in a cobblestone generator by placing string in the location where the cobblestone block would normally generate.

Page Template:Reflist/styles.css has no content.
Retrieved from "https://civwiki.org/w/index.php?title=Comprehensive_Guide:Production&oldid=37140#FactoryMod"
Categories:
Cookies help us deliver our services. By using our services, you agree to our use of cookies.