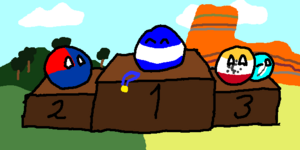 Bar diagram of medals per nation, click for full size

TODO numbers for attendants per day, participants per game, medals [1]

WackyAki and Feathercrown from Yoahtl took the initiative to host the event based on Yoahtl's stable activity, to make sure the deadline is met and the olympics are unlikely to be cancelled.

TODO which arenas, size/features, built when and by who

Members of all participating nations marched through the main arena with a flag banner on their head.

King of the ladder

This event was planned but got cancelled due to the delayed schedule and it being too similar to Capture the Flag.

Retrieved from "https://civwiki.org/w/index.php?title=First_Olympics&oldid=38980"
Categories:
Cookies help us deliver our services. By using our services, you agree to our use of cookies.