Hell Vault is a large vault situated in the Western part of the map. It is owned by Vanax45, and is currently the core territory of Olympia.

The vault was started in [], with the first major section completed in [].

The Hell War saw the Hell Vault breached by a series of attackers from all over the world. 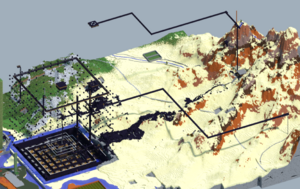 The Vault after the conclusion of the war.
Retrieved from "https://civwiki.org/w/index.php?title=Hell_Vault&oldid=38602"
Categories:
Cookies help us deliver our services. By using our services, you agree to our use of cookies.