The Gabon Corporation is a publicly traded Gabonese multinational conglomerate corporation operating in the fields of industry, consumer goods, agriculture and construction. The corporation produces over 24 products under several brands, including diamond tools, beacons, oak & birch logs, as well as a myriad of XP Materials and XP products. The Corporation is based in Salisbury, Gabon and is the first major shareholder-owned companies to be established on CivClassics.

Gabon Corporation made 6,121 diamonds in total sales for Q3 2021[1], and is one of largest corporations globally by total revenue. As of November 2021, the corporation had 15 employees and had operations in 7 separate countries. 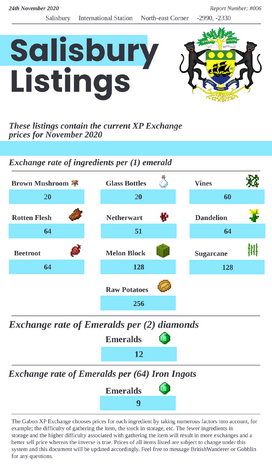 FKA_Twink, Gobblin and BritishWanderer founded GabonXP Corporation in October of 2020 as a means to profit off of the ever-expanding XP market, they would go on to make their first sale on the 12th of October. The goal of the GabonXP Corporation was to produce affordable XP and ship it across the globe, this endeavour would be coupled with XP exchanges allowing individuals to trade in XP materials for emeralds and vice versa.

GabonXP Corporation would be opened to public investment on the 19th of December 2020[2] where any member of the public could purchase a share in the Corporation for just 4 diamonds per share, with the Corporation offering to pay shareholders a dividend every quarter.[3] The initial prospectus offering of a total 200 shares for 800 diamonds was reached within just 5 days/[4]

In October 2020, the Corporation would move into an official HQ building in Whitehaven, Salisbury in Gabon where they would operate out of, the location was chosen for its accessibility and quick access to the Corporation's agriculture facilities.

Expansion and a timeline of the Corporation

The Internal Business of the Gabon Corporation

The Gabon Corporation is a public, joint-stock company. As of November 10th, 2021, it has 4000 outstanding shares, known as 'Class B Shares'. These are entirely held by the general public, institutions and governments.

Initially there were only 2000 class B shares available to purchase in the Gabon Corporation, however this was doubled with a stock split of 1>2 in May 2021, expanding the pool of class B shares to 4000.

The breakdown of the Class B shareholdings as of November 2021 is: 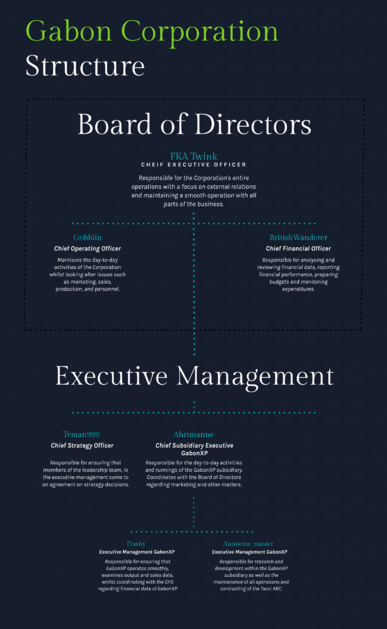 The Corporate Structure of the Gabon Corporation as of November 2021

The Gabon Corporation may use any of their held class B shares to reward employees or to bestow dividends on board members, although the voting rights of these shares is not able to be wielded by the Corporation on any proposals.

Class A shares is the name given to voting slips designated solely to Gabon Corporation employees, these shares hold no rights to dividends or any intrinsic market value as they may not be sold by employees to the public. There may be an infinite amount of class A shares as they do not affect the Corporation's valuation or the share dilution of the other shareholders, and are only used as voting rights by the board of directors, executive management and employees.

Employees may trade in their held class A shares to class B shares at a ratio of 1:1 pending a majority vote of approval by class B shareholders. Investors may see this as a way to approve or disapprove of an employee by choosing whether or not to reward employees with valuable dividend-paying class B shares. Shares exchanged will come from the Corporation's pot of purchasable class B shares as to not affect dilution.

The breakdown of the Class A shareholdings as of November 2021 is:

Whilst usually boards of directors would have external individuals, the entire board is made up of internal employees or founders, even into the subsidiaries of Gabon Corp.

Whilst both share classes possess voting rights, the Gabon Corporation intends to pride itself on being transparent and held responsible by its investors, and as such class B shares hold more importance in terms of voting power. For proposals that require the consultation and approval of Class B shareholders, a class A share vote shall be held internally prior.

All votes require a majority (51%) of held shares in that specific class in order to successfully pass - for the purposes of voting, corporation held class B shares do not count towards the necessary majority. Any proposal approval process held within the confines of a corporation discord channel or a signed letter by shareholders shall be valid for the cause of a vote.

Holders of class A shares, such of that as the Board of Directors and other employees may vote on proposals without the need for class B shareholder approval, such as but not limited to;

Holders of class B shares, such of that of public investors, rewarded employees and institutional shareholders, shall be consulted on for their approval for certain proposals such as;

Holders of class B shares may also, without consulting class A shares, cause for a vote on certain proposals such as;

Originally founded back in October 2020 as the predecessor to Gabon Corporation, GabonXP handles all of the internal emerald production and the crop producing facilities for the Gabon Corporation. It is responsible for the maintenance and day to day workings of fifteen farming facilities and properties as well as the security and storage of goods & emeralds. As of Q2 2021, GabonXP is the most profitable subsidiary in the Corporation's portfolio, operating on a budget of just 200d yet accounting for 37.5% of total revenue (excluding share sales). 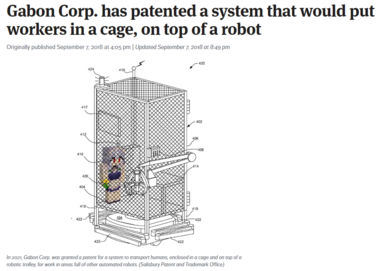 Patented system by the Gabon Corporation regarding employees in a cage for dandelion production. [by Ahrimanne]

GabonXP makes a majority of its revenue from XP sales as well as shop branches in other countries. GabonXP is also the management for the GabonXP Exchange in Salisbury.

As of Q2 2021, the following individuals play a role in the management of GabonXP

Salisbury Holdings makes a vast majority of its revenue off of rent payments from private individuals and government institutions as well as the sale/construction of schematics globally.

As of Q2 2021, the following individuals play a role in the management of Salisbury Holdings

Founded in 2019, Gabon & Westmore Company or sometimes known as Gobblin & Wanderer, was a retail venture established by Gobblin and BritishWanderer to sell diamond tools and prot as well as bulk building materials at low prices, mainly to newfriends or to emerging countries. It currently sits in three commercial properties which are under the management of Salisbury Holdings. As of Q2 2021, G&W is undergoing corporate restructuring yet is still in the business of selling beacons, building materials and providing delivery services. In Q2 2021, G&W had a budget of 300d and was responsible for 43% of total revenue for the (excluding share sales) Gabon Corporation.

As of Q2 2021, the following individuals play a role in the management of G&W

Retrieved from "https://civwiki.org/w/index.php?title=Gabon_Corporation&oldid=44667"
Categories:
Cookies help us deliver our services. By using our services, you agree to our use of cookies.