Killing a player while having an Ender Pearl in your hotbar will imprison the killed player and bind them to the item. The pearled player cannot be within 1000 blocks of their pearl if the pearl is inside a container (such as a chest).[1]. A player can not be pearled twice. Trying to pearl an exiled player will show the coordinates of their pearl. Exiled players cannot: [2]

However there are ways around some restrictions. For example, although exiled players cannot damage other players with weapons, they may still damage them with fireworks, falling anvils and more.

Captors must periodically fuel pearls. The fuel for pearls is essence. Players can claim essence (often referred as mana) daily. [3]

Placing the pearl in a chest with the required amount of mana will allow the player to continue to be bound to the pearl.[4] Not remembering will have the pearl decay, by 8 health per hour.

Players whose pearl has been upgraded to a prison pearl are sent to the end and therefore are not able to be sent back into the overworld. They will be permanently in the end. There are several end portals throughout the map that allow people to visit the end, however, and non-pearled players can return to the overworld. 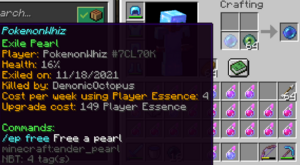 Example of pearl fueling. 64 Player Essence will be crafted into this exile pearl that is currently at 16%

CombatTag is a server plugin which is used to balance PvP (Player vs Player combat).

When you are "combat tagged" you are unable to log out of the server safely by using /logout. Instead, you are stuck in the server for a short period of time, and if you simply disconnect from the server you will leave behind a "combat logger". Your body is left behind for 30 seconds, and you can still be killed and pearled after you disconnect.

Make sure to always find a safe spot and /logout to leave the server safely. You will have to stand still for 10 seconds in order to log out safely, but this will avoid leaving your body behind for 30 seconds.

Retrieved from "https://civwiki.org/w/index.php?title=Comprehensive_Guide:Combat&oldid=43337"
Categories:
Cookies help us deliver our services. By using our services, you agree to our use of cookies.