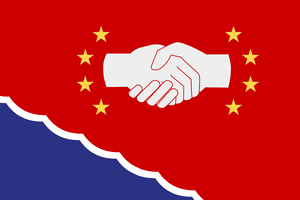 The South Eastern Socialist Union, short SESU, is a companionship of several socialist nations in the south-eastern quadrant. It was founded in summer 2018 between Lyra, Maltovia, Ossenkirch, Pripyat, and Provincia.

This group was succeeded by the Communist Cities Caretaker-Protectorate in October of 2019.

Desiring to strengthen the friendships, economic connectivity, and collaboration of the socialist republics of the greater Plus Plus quadrant these companion peoples endeavor to protect autonomy of members while promoting harmony and collaboration of all peoples upon the map.

Firm in their principles of equality, solidarity, and freedom all signatories recognize one another as partners and seek only greater understanding and mutual improvement.

To join the union, a current member has to suggest a nation. This suggestion then gets voted on internally, each nation's voice weighing equally.

  An alliance of socialist nation has been a long time coming from multiple directions. Provincia and Pripyat had gone back and forth over some sort of plan for about a year.

After the events of the Seven Minute War and the Nazi Bombing of Threepton (also known as the Ruin Event)[1], citizens and government officials within the Plus Plus thought it was high time to create an official alliance.

Retrieved from "https://civwiki.org/w/index.php?title=SESU&oldid=39097"
Categories:
Cookies help us deliver our services. By using our services, you agree to our use of cookies.