Fellowship was a group in Civcraft 1.0 and 2.0 based on the ideals of friendship, fellowship, and friendliness. Fellowship in Civcraft 2.0 was a settlement on Civcraft 2.0 in the (+,-) quadrant, founded in late May 2013 by UnknownOreo1996, Aurailious, BluWolf_, Ryumast3r, and several others.

Fellowship considers itself friends with its neighbors and has joined many of them in the North Eastern Alliance. 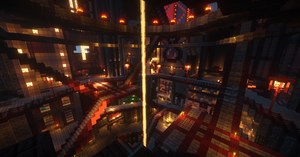 Fellowship is defined by its iconic Hexagon structure, one of the World Wonders of Civcraft 2.0.[1] The Hexagon is a massive superstructure dug within Fellowship's central mountains and is the city's main trading hub and residential center. It contains several layers, each getting larger as one ascends in the Hexagon, with the exception of uptown - the very top of the Hexagon - which is reserved for new residents and players who cannot afford larger housing lots.

Public Amenities For All

Amenities for Residents and Citizens

Fellowship's current governing document is the Articles of Incorporation v.4.[2]

Fellowship’s government is headed by one leader called a Sovereign. The Sovereign is a permanent position and is advised by a council composed of important members of the society.

Under the Sovereign is the High Council. These Councilors are permanent, appointed positions who handle the administration of Fellowship.

Separate from the Sovereign and the Councilors are the Governors. Governors lead over territories of Fellowship and have the ability to create their own internal laws (underneath the Articles) if they so choose. Territories are areas within Fellowship that have at least 3 residents.

The High Council is currently composed of:

Their job is to run Fellowship on the day to day basis as well as run the town on the international scale due to the lack of current Sovereign.

Fellowship is a member of the North Eastern Alliance, and takes a stance of military non-interventionism towards other nations and groups except when another member of the NEA is threatened. Fellowship follows an aggressive anti-raider policy, and many steps have been taken by Fellowship in order to curb raider activity in the North-eastern quadrant.

Fellowship works closely with its neighbors to establish an efficient defense network, collaborating with the NEA and nations in the North East to catch criminals and defend each other's territories. Fellowship also works closely with nations on other sides of the world, when asked, to catch international raiders.

Fellowship had an official population count of 101 players. 26 Fellows (active and Inactive), 63 residents, and 13 Foreign Nationals. The population consists largely of teenagers and young adults. There is a large variety of players in Fellowship, however, with many Americans and Canadians, Dutch, and Israelis, to name a few.

Fellowship is largely considered the most active city in Civcraft.[3] Following its brief period of severe inactivity, this boom in population is attributed to the Hexagon being complete as well as the Israeli group joining the town led by the streamer, Olivay.

Fellowship currently is in a period of inactivity with only around 8 active players.

Fellowship consists of multiple Territories, each with their own Governor in charge of local operations.

The Hexagon is just what it sounds like. It sits at the center of Fellowship and is where most of the population resides. Recently, the Hexagon has become a major transportation and trading hub for the (+,-) quadrant. The Hexagon consists of many levels organized into 'Downtown', 'Midtown', and 'Uptown' neighborhoods. There is also an outer "ring" of "Hexpansions" current under construction. Major landmarks inside of the Hexagon include the Brimstone Challenge, an obstacle course, Club Lehmanster's, and the Mall. Officially the Hexagon also includes the outdoor areas known as South Bay, Central/Fort District, and the old Residential District.

Screenshots and renders of the Hexagon and other parts of Fellowship can by found on the subreddit.

The current Governor of the Hexagon is 0ptixs.

On the plains to the east of the Hexagon lies Lightbarrow. It began its life as a farming establishment known as Lightbarrow Cooperative. Today, Lightbarrow is home not only to the growing co-op but several private residences and the Pierre-Joseph Proudhon Library. It is also the site of Fellowship's portal farm, one of the largest on the server. Its vast open spaces offer Fellowship residents an alternative location for larger, more free-form builds.

West of the Hexagon is Fardis, formerly known as the Farm District or Agricultural District, is the location of most of Fellowship's public farms. It also contains private residences for those who wish to live away from the hustle and bustle of the capital. Several members of the IDF call Fardis their home.

Fardis was originally called Bedford, and later evolved into the Estate District. When SoulComplex became governor of this area he turned it into a farming district, since Estates were no longer needed due to the Hexagon's completion.

The current Governor of Fardis is mollymollykelkel.

Fellowcamp is an old farming and residential establishment southwest of Fardis and was one of the original settlements of Fellowship, prior to the construction of the Hexagon. It aims to provide a rustic atmosphere for its residents and visitors. Fellowcamp also includes Alkagora, another farm establishment once part of the now-defunct Agoran Federation.

The remnants of a lost militaristic city, Arx was instrumental in the safety of Fellowship in 1.0 and very early 2.0. The current outpost is located far North of Civilization and serves as a retreat and massive farming base in times of need. Claims were been contested and a compromise was made by Saraliana. However recently with the collapse of the Saralianain government, Arx is now once again a recognized territory of Fellowship.

The current Governor of Arx is Mulificus.

In the earliest days of 2.0, near May 20th, 2013, the citizens of Civcraft 1.0 cities of Bay City, Fellowship, and Agora came together in Camp Beige, a settlement located at +3000x, -3000z. The original settlers representing Fellowship were UnknownOreo1996, Ryumast3r, and Matey_HD. Together with Bay City (Now Bryn City), and Agora (Agoran Federation, now just Aurora (Civcraft 2.0)) they started mapping out the +,- and gathering supplies, in order to build a triangle of cities. The original idea was to have the 3000,-3000 island as a trading hub located near the center of the three cities. Ryumast3r lead the exploration team for Fellowship, and it quickly became evident that Camp Beige would not be a suitable trading post for the three cities.

Camp Beige was quickly abandoned, with only small buildings left as remnants as well as a few fountains representing the union of Fellowship, Agora, and Bryn, in the True Neutral League. This later lead to a dispute between Fellowship/Bryn/Aurora and Grundeswald.

After exploring the +,-, a location for the Hexagon was decided upon in the Mountainous forest around 6100, -2700. UnknownOreo1996, Ryumast3r, Infomaster, BluWolf_ and several others. The original settlement was located on the beach, which is now covered. One may still see remnants of the structures here by visiting the "buried city", underneath the large stone walkway across the bridge from the library.

During this brief period of time, Ryumast3r and 0ptixs set up a pattern for the base Hexagon, which was the size of the current Canal-level, but was supposed to be the bottom level.[4] This pattern was floating in the sky above the mountains. The intention was to dig the Hexagon out of the mountain. Many pathways were constructed up to the top of the mountain, and a small town started forming below the mountains on the beach - where the Residential District is now.

By the 28th of May, 2013, Fellowship was ready to begin breaking ground on the Hexagon.[5] Many people participated in the groundbreaking, including all of the founders, Cushionhead1, Johnwall82, Eldoorn, Preston, and Chronofiber, among others. Reports were made daily in the beginning days of the dig. [6][7]

While beginning the dig, as well as setting up initial infrastructure in Fellowship (including factories, ladders, staircases, and farms), minor disputes between other groups in the area began. The now-defunct township of Bedford, with its leader, Bowser69, claimed to be a griefer-haven. Several griefers who lived in this township had previously griefed Fellowship around the beginning of June, 2013. Following the dispute, it was agreed upon that Bedford would become a district,[8] with Bowser69 as its district leader. Districts are now known as territories, leaders and the District Council now known as Governors while the Council is now defunct. Bedford District later became the Estate District, then part of the Farm District, now Fardis.

Bowser69 resigned as councilman one day later, on June 2nd, 2013. With that, Bedford District became inactive.

Between late May and early June, both Ryumast3r and Matey_HD attempted to convince many of the Fellowship settlers to move to a location known as Fellowcamp (now Fellowcamp District). They worried that the structures being built would result in the Hexagon not being completed, and looking out of place with small structures all around the mountains and beach. A few people moved to Fellowcamp and started the small city there, including several farms, animal pens, and many houses. Many people, however, stayed on the beach area near the Hexagon and continued to build structures there. By the 2nd of June, Matey_HD resigned as a High Councilman (above District Council at the time, now defunct). Matey_HD then left to join Eagles and others. Ryumast3r remained in Fellowcamp, but also maintained a house in Bryn City during this time.

Fellowship quickly grew in size, however the Hexagon did not so quickly grow. Fellowship gained shops, fountains, and a canal towards the Hexagon, among other things.[9] The Residential District was also founded in this time between June and July of 2013. Everything seemed to be going well for Fellowship and the grand plan of the Hexagon was coming along.

June however, eventually ended, and by the time July had come around, UnknownOreo1996 had become inactive, Ryumast3r spent most of his time in Bryn, 0ptixs in Brimstone, and many of the citizens left in search of wealth or more active cities. By July 3rd, there was hardly anybody left.[10]

Retrieved from "https://civwiki.org/w/index.php?title=Fellowship&oldid=38621"
Categories:
Cookies help us deliver our services. By using our services, you agree to our use of cookies.