Devoted Hell, also known as Devoted 4.0, is the latest iteration of Devoted and the first Nether dimension only Civ server.. It launched on January 15, 2021[1] and was created by Convoy, Diet_Cola, Maxopoly, and ProgrammerDan with help from many others. The IP address is play.devotedmc.com and it runs on Minecraft 1.16.

Even though Devoted Hell has so far been entirely free to play, there were plans to require a monthly subscription to play, with players getting 10 hours per month free.

Subscriptions were won through giveaways on the Discord or bought via Patron or Buycraft.

Devoted Hell began as a late night idea by Convoy. He put together a launch trailer with no real intentions for a server.

The world is divided into four shards: Asmodeus, Brimstone, Cerberus, and Deracinate, often abbreviated to just A, B, C, and D. The shards are arranged in a straight line starting with Asmodeus in the south and ending with Deracriante in the north. Each shard has a size of 4096x4096m (the size of 8x8 Minecraft regions). You can see which shard you are in on the player list (press Tab).

Shards have different difficulties due to their HiddenOre rates and reinforcement configurations. If you die in a shard and haven't set your spawn in that same shard, you'll randomly spawn in that shard. Pearls cannot be moved between shards.

The lobby is a separate world with a tutorial, quests, and a PvP training area.

To return to the lobby, use the /lobby command. 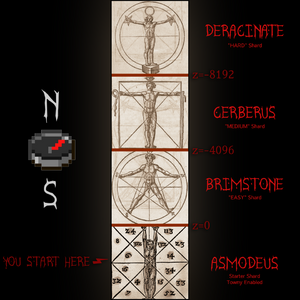 Layout of the shards.

Asmodeus is the starting shard. It ranges from z=+4096 to z=0, sharing a world border with Brimstone.

The starting shard has no Diamond or Ancient Debris, and Towny is installed on this shard. All other ores have the worst spawn rates, and the growth rates for plants is the worst out of all the shards as well.

HellCorp is located in this shard.

Ranges from z=0 to z=-4096. This shard was the least active during the first few weeks of the server, with much of its player activity being travelers to other shards.

Ranges from z=-4096 to z=-8192. It was the most active shard during the first weeks of the server, most likely due to it being a happy medium between difficulty, ore spawns, crop growth rates, and the like.

Nations include Carbon and Helios.

In addition to the typical Civ plugins, Devoted Hell uses several plugins that are typically not found on other Civ servers.

A 1-minute overview of the most important Civ plugins can be found here: https://www.youtube.com/watch?v=UndYsun5Nwg

Enabled by default, if you don't want to use it, feel free to turn it off in /config. When breaking fully grown crops, will take a seed from your inventory and use it to replant. It works on Nether Wart, Wheat, Potatoes, Carrots and Beetroots. The delay is set to 5 ticks to replant.

Right click a stair block to sit on it.

Some items can be crafted in new ways.

EssenceGlue gives you "Souls", a special item that each player can only earn a fixed amount of every day.

Souls are used in high tier tech tree recipes, such as making Netherite tools or XP.

There are two ways to earn souls:

Jobs Reborn lets you level up in various professions for doing activities in the game. The experience can be redeemed for items in the Jobs shop.

Right click Striders with a Compass to see their stats. You can breed them similar to horses to improve their speed & health stats. The slowest striders should be their vanilla speed and the fastest striders on lava can match a max speed horse.

Towny is enabled in the starter shard (#Asmodeus).

Bastions are enabled, but only have a size of 1x1m.

Pearls cannot be moved across shards. Pearls can be acquired via Piglin trading.

The rate at which you find ores depends on which shard you're in and your y-level. More difficult shards have higher ore spawning rates. Each ore also has a certain range of y-levels where it spawns more often.

Mining Notes are special paper items that give information about the ore spawning. They drop randomly while mining. Example: Diamond Mining Note 1A: Minimum Y level is 1

Type /jainfo near the Jukebox to see the log.

Type /rb to see the growth times for the shard you are in.

Retrieved from "https://civwiki.org/w/index.php?title=Devoted_Hell&oldid=37524"
Categories:
Cookies help us deliver our services. By using our services, you agree to our use of cookies.