The Aggregate Truidencian Party is a political party in Imperial Truidence advocating for Conceptualism, Distributism, colonial expansion and orthodox Bezism. The party was founded on the 10th of June, 2021 by the Bog Knight, Discozoa in order to organize the like-minded Truidencians engaging in the democratic system. The ATP's primary rival is the Truidencian People's Party (TPP). 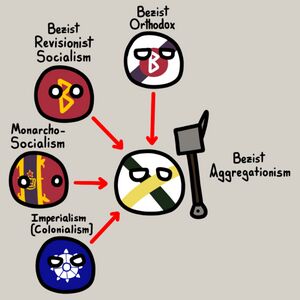 The ideological basis of the ATP is that of Bezism and loyalty to the faith first and foremost. In order to reinforce the faith, the spread of Bezism and Bezist temples is a key goal.

The economic policy of the party is that of a form of Distributism, being somewhat of a midpoint between capitalist and socialist economics. This demands a compromise with business-run organizations and worker-run unions, with both having rights and privileges under the law of Imperial Truidence, neither surpassing the other.

A key goal of the ATP is the growth and development of the eastern lands of Imperial Truidence, usually defined as regions east of the city of Northland. As the founder and current leader of the ATP, the Bog Knight, has invested much into these lands and colonies, it is central to the party. Ever since the fall of Verda and the many unclaimed areas in the region, this eastward colonialism was based off of this opportunity.

The foreign policy is focused on mutual gain with neighboring nations, specifically accessing the international community east of Imperial Truidence. In the past, the 'King of the Noon' doctrine as it was called was professed by the ATP, before it was realized that claiming lands in the central region had become an impossibility and the ATP refused to have conflict with Icenia (a key point of the now dissolved ATNPP). Cooperation and solidarity with eastern nations has also been undertaken.

Actions of the ATP

Retrieved from "https://civwiki.org/w/index.php?title=Aggregated_Truidencian_Party&oldid=42787"
Categories:
Cookies help us deliver our services. By using our services, you agree to our use of cookies.