Robo's is a one-man architectural firm that practices from Southshire. Its namesake and founder, RoboRik, had years of experience as a commercial builder[1] before coming to CivClassic. He specialises in realistic, 1-on 1-scale European architecture, but can adapt to a broad spectrum of needs. His work is notable for its concern with interior spaces.

Delivery times vary with size and complexity, but are usually between two days and a week. Contact RoboRik on Discord[2] to get a quote.

A Robo's design is always provided as a schematic (or litematic, per client preference). Robo's does not offer a schematic construction service.

Samcester, the capital of Southshire, features an eclectic mix of English styles. Its main focus is Victorian architecture, particularly Gothic Revival. Robo's drew the street plan, laid down the plots, and designed all public buildings; the city remains its largest project ever.

Samcester is not the only centrally-planned city on CivClassic, but certainly its most ambitious one. In order to simulate the winding, organic streets of a real English city, the plots are jagged and irregular, and sit at unusual angles. Designing convincing interiors with this tilt represented a profound technical challenge. The striking monuments of Samcester include the cathedral-like Samcester Parliament, the St Pancras-inspired Bugga's terminal, and the extravagantly Victorian museum of Castle Samuel. The three buildings on King Peter's Square, where most visitors will likely enter the city for the first time, represent the three powers of Southshire's history: the Commonwealth, Yoahtl, and now the Triumvirate itself. 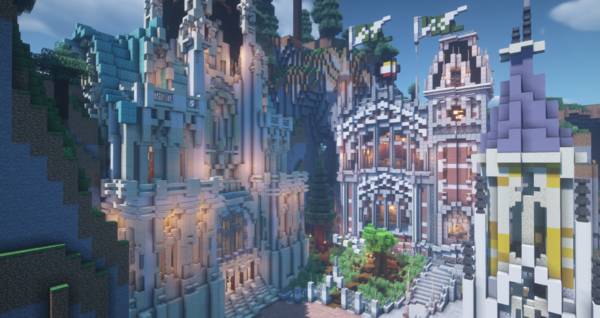 Yoahtl Gallery is a small exhibition space in New Yoahtl City. Conceived by Jyn and commissioned by the Yoahtl government, it displays a rotating collection of map art and hosts regular art competitions. The gallery is intended to mimic the fashionable art shops of real-life urban centres. 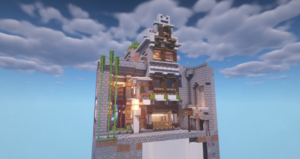 Yoahtl Gallery was designed with the surrounding urban context in mind.

The plot is small and situated under a bridge crossing, demanding careful planning. Robo's settled on a narrow, vertically-oriented Dutch gable as the visual centrepiece, The other walls were kept in muted colours, so that they would not look out of place in the interior. The entrance is designed in a contrasting modernist style and gives the impression of a later addition. Above the gallery space are two small apartments.

Fitting a tall gable over a bridge took some architectural trickery: the top floors hide a hollow passage and do not have an interior. 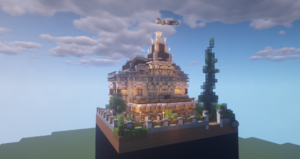 Chāntli (Nahuatl for 'house' or 'dwelling') is a Second Empire villa in Icenia City. The design blends influences from both the American and the French variants of the style. It was commissioned by WackyAki, the reigning Alcuahtl of Yoahtl, to serve as his Icenian residence. It is surrounded by a small, landscaped park with a duck pond and two trees.

The interior of Chāntli is more or less realistic, but designed with utility in mind; the rooms are sparsely decorated and none of them are furnished. The souterrain has a vaulted ceiling and would have been the domain of the servant staff, housing facilities like the kitchen, the workshop, et cetera. The ground floor has minor rooms for the private use of the family, but also the monumental vestibule with its grand staircase. The first floor is the piano nobile , putting the family's wealth on full display. It would have featured the most important bedrooms and a bombastic saloon. The second floor, of much less importance, offered sleeping quarters to the servant staff, and the attic would have been used for miscellaneous storage.

Mebiusu no ie (Japanese for 'House of Möbius', the Discord alias of patron smallfry834618) is a rustic villa on the outskirts of Okato. Like the rest of the city, it borrows heavily from the architecture of Tokugawa-era Japan. 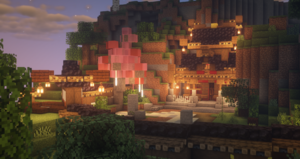 A view of Mebiusu no ie at dusk.

The focal point of Mebiusu no ie is not the house itself, but its small yet intricately landscaped garden. The front end of the park, a Japanese rock garden, is surrounded by walls and entered through a picturesque gate. A more secluded koi pond extends behind the house and offers a bench for quiet contemplation. A large torii on the hillside gives the garden an element of verticality.

Retrieved from "https://civwiki.org/w/index.php?title=Robo%27s&oldid=41166"
Category:
Cookies help us deliver our services. By using our services, you agree to our use of cookies.